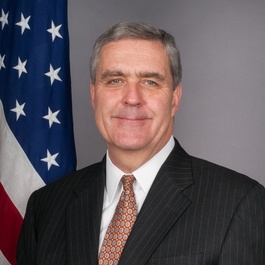 The following is Ambassador Doug Lute's biography when he was a fellow with the Project on Europe from 2018-2021.

Ambassador Douglas Lute is the former United States Permanent Representative to the North Atlantic Council, NATO’s standing political body.  Appointed by President Obama, he assumed the Brussels-based post in 2013 and served until 2017.   During this period he was instrumental in designing and implementing the 28-nation Alliance’s responses to the most severe security challenges in Europe since the end of the Cold War.  He received the State Department’s Distinguished Honor Award.

A career Army officer, in 2010 Lute retired from active duty as a lieutenant general after 35 years of service.  In 2007 President Bush named him as Assistant to the President and Deputy National Security Advisor to coordinate the wars in Iraq and Afghanistan.  In 2009 he was the senior White House official retained by President Obama and his focus on the National Security Council staff shifted to South Asia.  Across these two Administrations, he served a total of six years in the White House.

Before being assigned to the White House, General Lute served as Director of Operations (J3) on the Joint Staff, overseeing U.S. military operations worldwide.  From 2004 to 2006, he was Director of Operations for the United States Central Command, with responsibility for U.S. military operations in 25 countries across the Middle East, eastern Africa and Central Asia, in which over 200,000 U.S. troops operated.

In earlier assignments he served as Deputy Director of Operations for the United States European Command in Stuttgart, Germany; Assistant Division Commander in the 1st Infantry Division in Germany; Commander of U.S. Forces in Kosovo; and Commander of the Second Cavalry Regiment.  Through his military career, he received numerous honors and awards, including three awards of the Defense Distinguished Service Medal.