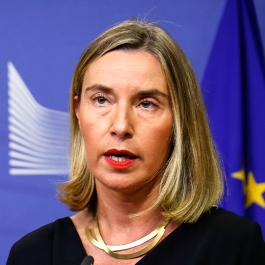 The following is Federica Mogherini's biography when she was a fellow with the Future of Diplomacy Project from 2020-2021.

.Federica Mogherini served as High Representative of the European Union for Foreign Affairs and Security Policy and Vice-President of the European Commission from 2014-2019 where she was Europe’s top diplomat, responsible for coordinating foreign policy among 28 countries. In September 2020, she will be Rector of the College of Europe.

During her tenure as High Representative/Vice-President, she was instrumental in forging the Joint Comprehensive Plan of Action with Iran and launched the EU’s Global Strategy for Foreign and Security Policy. Previously, Mogherini served as Minister of Foreign Affairs of Italy from February to October 2014 and was a Member of the Italian Parliament (Chamber of Deputies), where she was elected for the first time in 2008.

During her terms in parliament, Mogherini was the Head of the Italian Delegation to the NATO Parliamentary Assembly and Vice-President of its Political Committee (2013-2014); member of the Italian Delegation to the Parliamentary Assembly of the Council of Europe (2008-2013); Secretary of the Defence Committee (2008-2013) and member of the Foreign Affairs Committee.

Mogherini was born in Rome in 1973 and graduated in Political Science at the University of Rome “La Sapienza.” She has two daughters, Caterina and Marta.