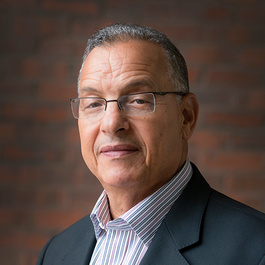 Former Minister Hedi Larbi is an associate at the Belfer Center's Middle East Initiative and former Kuwait Foundation Visiting Scholar (2015-2016). He most recently served as Advisor to the MENA Vice President at the World Bank, and from January 2014 to February 2015 served as both the Minister of Economic Infrastructure and Sustainable Development and the Economic Advisor to the Prime Minister, Tunisia. Mr. Larbi has over 35 years of professional experience in economic and social development as both a policy advisor and policy maker, with more than two decades of high level work in the World Bank Group, the private sector (in Europe and Middle East and North Africa), and the Tunisian transition government. Mr. Larbi also has substantial expertise in the areas of public policy, economic and sectoral development strategies, private sector development, infrastructure services, human capital development, public finance and macroeconomic management, infrastructure (transport, water, energy, and urban services), social sectors (education, health, social protection), and more. He has developed, negotiated and supervised major economic and institutional development programs, and public and private investment operations in various social and economic sectors including major infrastructure projects and economic reforms. Mr. Larbi has an excellent knowledge of the economic, institutional, political and social challenges of the MENA region as well as of many Sub-Saharan countries. To a lesser extent, his regional experience extends to Latin American Countries and East and Central European Countries in the context of cross-support and policy advice to governments and World Bank teams. Mr. Larbi holds an MSc in Civil Engineering from the Ecole des Mines de Paris, and an Executive MBA from Harvard Business School.