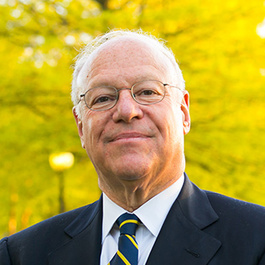 Herbert S. "Pug" Winokur, Jr. has served as the Chairman and Chief Executive Officer of the private investment firm Capricorn Holdings, Inc., since 1987.  He also has been the managing general partner of a number of affiliated limited partnerships, whose goals are to invest in, or acquire, companies with the potential of long-term superior capital appreciation through financial or operating restructuring and industry consolidation. These partnerships controlled companies whose aggregate revenues exceeded $3 billion, and which employed more than 25,000 people. He currently is an investor in a number of growth equity companies in the energy, defense and technology sectors, including Dynatech/MPX Holdings, LLC, where he is the Chairman and controlling shareholder. Dynatech International LLC is an important supplier of legacy aircraft engine parts to many foreign air forces flying U.S. military aircraft.

From 1973 to 1987, he served as Senior Executive Vice President and Director of the Penn Central Corporation and held senior management positions at Pacific Holding Corporation, Victor Palmieri and Company, and Pennsylvania Company. From 1969 to the early 1970's, he was Co-founder and Chairman of ICF Inc., a management consulting and investment firm specializing in policy planning for senior government and business officials and also concentrating on socially oriented investments. He served as a U.S. Army officer in the Office of the Secretary of Defense from 1967-1969.  An active participant in both nonprofit and for-profit organizations, Mr. Winokur is an honorary director of the UCLA Medical Center Board of Advisors, a former trustee of Greenwich Academy and the National Humanities Center, and a former co-chair of the New-York Historical Society.  He currently serves on the boards of Ithaka Harbors, Inc. and Squash Haven (which he co-founded), and has been a director of a number of public and private corporations. He is a member of the Council of Foreign Relations. In addition, he has written extensively on corporate governance, and served on a number of corporate boards.

Mr. Winokur served as a Fellow of the Harvard Corporation and as a Director of Harvard Management Company, and was a co-chair of the capital campaign for Harvard’s School of Engineering and Applied Sciences. He earned A.B., A.M., and Ph.D. degrees from Harvard University, the last in Decision and Control Theory.

Mr. Winokur and his wife, Dee, reside in Greenwich, CT.