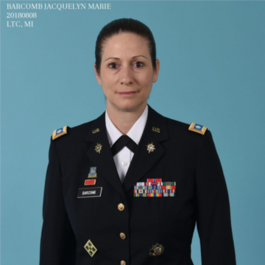 Colonel Jacquelyn Barcomb most recently served as a Military Assistant to the Secretary of the Army in the Pentagon.  She is a native of Barre, Vermont and was commissioned into the United States Army in 1998 as a Military Intelligence Officer, from the Florida Institute of Technology, where she earned a Bachelor of Science degree in Mechanical Engineering.

Following Officer Basic Course and two overseas assignments in South Korea and Germany, Col. Barcomb deployed to Kuwait with the 513th MI Brigade during the opening months of Operation Iraqi Freedom. In 2004, Col. Barcomb commanded D Company, 201st MI Battalion, after which she was assigned to the U.S. Southern Command, as the officer-in-charge of the Signals Intelligence Exploitation Branch within the Intelligence Directorate. Col. Barcomb then went on to deploy with the 4th Infantry Division, where she served as the Division Collection Manager in Iraq during Operation New Dawn. In 2011, she attended the College of Naval Command and Staff, in Newport, Rhode Island, graduating with distinction and earning a Master of Arts degree in National Security and Strategic Studies.

Col.Barcomb was then selected to serve as the Military Assistant for the Under Secretary of the Army. After her year on the Army Staff, she was assigned to the 704th MI Brigade, where she served as the operations officer for the 742nd MI Battalion with a follow-on selection as the Brigade Deputy Commander. In 2016, LTC Barcomb assumed command of the Army Geospatial-Intelligence Battalion in Springfield, Virginia.