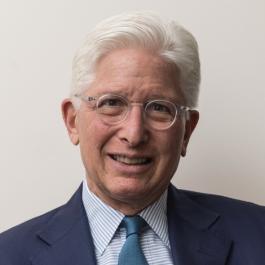 James S. Snyder is the Executive Chairman of the Jerusalem Foundation, Inc. and Director Emeritus of the Israel Museum. He served as the Israel Museum’s Anne and Jerome Fisher Director from 1997-2016 and then its International President through 2018.

As Director, Snyder led the Museum through the most dramatic period of growth since its founding and secured its stature as one of the world’s foremost museums. During his tenure, the Museum more than doubled its annual attendance to nearly one million visitors and increased its endowment more than fivefold to $200 million. Snyder also conceived and realized a series of successful initiatives to upgrade and enhance the experience of art and architecture across the Museum’s 20-acre campus, culminating in a comprehensive $100-million, 300,000-square-foot expansion and renewal designed to resonate with the Museum’s original architectural plan and a dynamic reinstallation of its wide-ranging collections. During his subsequent term in the newly created role of International President, Snyder continued to spearhead the development of the Museum’s extensive international network of Friends organizations; to build the Museum’s relationships with sister institutions and collectors worldwide; and to support the Museum’s leadership in strategic planning, professional staff development, and program planning.

Israel’s largest cultural institution, the Museum is universal in scope, comprising over 500,000 objects under the jurisdiction of curatorial wings for archeology, Jewish world culture, and the fine arts extending to contemporary art worldwide. Snyder led a staff of over 350 complemented by a volunteer force equal in size. He also fostered substantial growth of the Museum’s International Friends network, expanding it across 16 countries on four continents and strengthening the Museum’s global foundation for operating, exhibition and programming, and capital support. Given its cross-communal reach in Jerusalem – serving local visitors, tourists, and over 100,000 students each year from all of its diverse communities – and its global profile, the Museum has become an important center for cultural diplomacy in Israel and internationally from the Middle East to North and South America, Europe, Africa, and Asia.

Under Snyder’s leadership, the Museum also greatly expanded its encyclopedic holdings across all collecting areas, with the addition of more than 55,000 individual objects and works of art, including a collection-building campaign during the Museum’s 50th Anniversary in 2015, which attracted gifts of more than 20 collections numbering several thousand objects and nearly 500 individual works of art. Among the notable works acquired during Snyder’s tenure include: in Archaeology, the Renée and Robert Belfer Collection of Ancient Glass and Greek and Roman Antiquity and the Demirjian Family European Bronze Age Collection; in Jewish Art and Life, an illuminated Mishneh Torah of Maimonides (ca. 1457), acquired jointly with the Metropolitan Museum of Art, and the restored 18th-century Tzedek ve-Shalom Synagogue from Paramaribo, Suriname; and, in the Fine Arts, Nicolas Poussin’s Destruction and Sack of the Temple of Jerusalem (1625), Rembrandt van Rijn’s St. Peter in Prison (1631), the Arturo Schwarz Collection of Dada and Surrealist Art, Jackson Pollock’s Horizontal Composition (1949), the Noel and Harriette Levine Collection of Photography, Yayoi Kusama’s Ironing Board (1963), Alina Szapocznikow’s Cleaning Woman (1965), and Gerhard Richter’s Abstraktes Bild (1997); together with acquisitions of emerging contemporary art and site-specific commissions by such artists as Ai Weiwei, Olafur Eliasson, Anish Kapoor, and Doug and Mike Starn.

Snyder strengthened the Museum’s regional and international presence with an ambitious series of collection and loan exhibitions in Jerusalem and traveling exhibitions worldwide, extending to North and South America, Europe, and Asia. These included: Ai Weiwei: Maybe, Maybe Not (2017); the Museum’s 50th Anniversary exhibitions, among them A Brief History of Humankind (2015), featuring 14 pivotal objects from across the Museum’s collections from prehistoric times through the present day, complemented by signature works from the Museum’s contemporary holdings, and Twilight over Berlin: Masterworks from the Nationalgalerie, 1905-1945 (2015); James Turrell: Light Spaces (2014); Dress Codes: Revealing the Jewish Wardrobe (2014); Herod the Great: The King’s Final Journey (2013); A World Apart: Glimpses into the Lives of Hasidic Jews (2012); William Kentridge: Five Themes (2011); Looking for Owners and Orphaned Art (2008), two ground-breaking exhibitions on art looted during World War II; and Surrealism and Beyond (2007), which completed major international tours in 2009 and then again in 2014-15.

Prior to his appointment at the Israel Museum, Snyder held a number of positions at The Museum of Modern Art, New York, culminating as Deputy Director from 1986 to 1996. During his tenure at MoMA, he oversaw the $60-million, 350,000-square-foot expansion of the Museum in 1984 and had significant organizational responsibility for major international loan exhibitions, including Pablo Picasso: A Retrospective (1980) and Henri Matisse: A Retrospective (1992).

In recognition of his leadership in the arts, Snyder has been awarded the Commendatore dell’Ordine della Stella della Solidarietà Italiana (Commander of the Order of the Star of Italian Solidarity) by the Republic of Italy and the Chevalier de l’Ordre des Arts et des Lettres (Knight of the Order of Arts and Letters) of the French Republic. In 2011, he was awarded the Jerusalem Foundation’s Teddy Kollek Award for Significant Contribution to Jerusalem, and, in 2012, Jerusalem Mayor Nir Barkat conferred on him the title of Honorary Citizen of Jerusalem.
Born in Pittsburgh, Pennsylvania, Snyder is a graduate of Harvard University and a Loeb Fellow of Harvard’s Graduate School of Design, and he holds an Honorary Doctorate of Humane Letters from Hebrew Union College. He is married to Tina Davis, a graphic artist and designer, and they have two children.