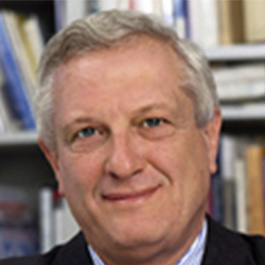 Josef Joffe, the Marc and Anita Abramowitz Fellow in International Relations at the Hoover Institution, is publisher-editor of the German weekly Die Zeit.

Previously he was columnist/editorial page editor of Süddeutsche Zeitung (1985–2000).

His areas of interest are: U.S. foreign policy, international security policy, European-American relations, Europe and Germany, and the Middle East.

His essays and reviews have appeared in a wide number of publications including the New York Review of Books, Times Literary Supplement, Commentary, New York Times Magazine, New Republic, Weekly Standard, and the Prospect (London). He is a regular contributor to quality daily newspapers in the United States and Britain.

His second career has been in academia. Currently, he is adjunct professor of political science at Stanford, where he was the Payne Distinguished Lecturer in 1999–2000. He also is a distinguished fellow of the Freeman Spogli Institute for International Studies at Stanford. In 1990–91, he taught at Harvard, where he is also an associate of the Olin Institute for Strategic Studies. He was a visiting lecturer in 2002 at Dartmouth College and in 1998 at Princeton University's Woodrow Wilson School. He was a professorial lecturer at Johns Hopkins (School of Advanced International Studies) in 1982–1984. He has taught at the University of Munich and the Salzburg Seminar.

His scholarly work has appeared in many books and in journals such as Foreign Affairs, the National Interest, International Security, and Foreign Policy as well as in professional journals in Germany, Britain, and France. He is the author of The Limited Partnership: Europe, the United Statesand the Burdens ofAlliance and coauthor of Eroding Empire: Western Relations With Eastern Europe. His most recent book is The Future of International Politics: The Great Powers (1998); forthcoming is Über-Power: The Imperial Temptation in American Foreign Policy, to be published by W.W. Norton.

He is a trustee of Atlantik-Brücke, Berlin, and of Deutsches Museum, Munich; Abraham Geiger College, Berlin, and a member of the American Council on Germany and the International Institute for Strategic Studies.

Among his many awards are honorary doctoral degrees in human letters from Swarthmore College in 2002 and Lewis and Clark College in 2005; the Theodor Wolff Prize (journalism) and Ludwig Börne Prize (essays/literature), Germany, and the Federal Order of Merit, Germany.

Reared in Berlin, he obtained his Ph.D. degree in government from Harvard.