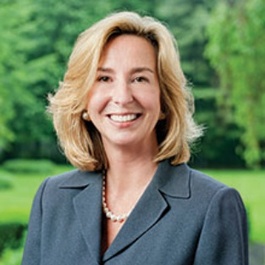 Kerry Healey served as President of Babson College from 2013 to 2019, following nearly three decades of service in academia, government, and humanitarian work both in the United States and internationally.

Under her leadership, Babson strengthened its reputation and position as the recognized global leader in entrepreneurship education, consistently ranked the No. 1 undergraduate school and No. 1 MBA program for entrepreneurship, and No. 1 for international students.

Healey created and launched Babson's prestigious Global Scholars program, a full-tuition, need-based scholarship for exceptional international students. During her tenure, Babson expanded its presence in Boston and Miami, and brought free, online entrepreneurship courses to more than 100,000 students in 200 countries and territories worldwide. Through the creation of Babson Connect: Worldwide, the College's annual entrepreneurship summit, Healey coalesced Babson's global community of 40,000 alumni and friends in 114 countries. Under her leadership, alumni participation increased 100 percent.

Prior to Babson, Healey served with distinction as the 70th lieutenant governor of Massachusetts. During that time, she introduced, enacted, and implemented a wide range of policy and legislative initiatives for the Romney-Healey administration, highlighted by a successful bipartisan effort to craft first-in-the-nation health care reform legislation.

Healey has led numerous philanthropic initiatives in the United States and abroad. In 2008, she was appointed as a founding member of the Executive Committee of the U.S. State Department's Public-Private Partnership for Justice Reform in Afghanistan (PJRA). She also spent more than a decade as a public policy consultant to the United States Department of Justice for Cambridge-based think tank Abt Associates. She has been a fellow at the Harvard Kennedy School's Institute of Politics and Harvard Kennedy School's Center for Public Leadership.

Healey is a trustee of the American University of Afghanistan and the Prince Mohammad Bin Salman College of Business and Entrepreneurship in Saudi Arabia. She is a member of the Council on Foreign Relations and the World Economic Forum expert network. She serves on the advisory boards of the Harvard Kennedy School's Mossavar-Rahmani Center for Business and Government and Taubman Center for State and Local Government. Healey is also a member of the advisory council for Concordia and the Junior Achievement USA Board.

Healey holds an AB in government from Harvard College and a PhD in political science and law from Trinity College, Dublin.