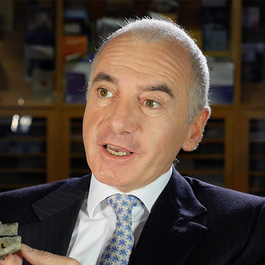 Until his death, Maugeri was a Senior Fellow with the Geopolitics of Energy Project and the Environment and Natural Resources Program at the Harvard Kennedy School's Belfer Center for Science and International Affairs.

One of the world's foremost experts on oil, gas, and energy, Maugeri was one of the most distinguished top managers of Eni, the largest Italian company, which is also ranked number 6 among the largest international oil companies. At Eni, he held the position of Senior Executive Vice President of Strategies and Development (2000–2010) and eventually became Executive Chairman of Polimeri Europa, Eni's petrochemical branch (March 2010–June 2011). In 2008, Maugeri promoted the strategic alliance between Eni and the Massachusetts Institute of Technology (MIT), which—among other outcomes—led to the establishment of the Eni-MIT Solar Frontiers Center in 2010.

Maugeri is recognized worldwide for his books and seminal articles about energy, as well as for his part-time activity as a lecturer in some of the most prestigious universities and think-tanks. Since the early 2000s, he was among the few who affirmed that the world's oil was neither running out nor approaching its "peak-production." He was also among the few who predicted the revolution of shale-gas and tight oil.

He published four books on energy, among them The Age of Oil: the Mythology, History, and Future of the World’s Most Controversial Resource (Praeger, 2006), which earned the Choice Price in the United States in 2007 and was translated into eleven languages. His latest book—Beyond the Age of Oil: The Myths and Realities of Fossil Fuels and Their Alternatives—was published in the United States in March 2010.