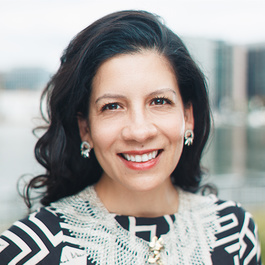 Barsallo Lynch has a background in politics and an academic background at the cross-section of cybersecurity and technology. As the D3P Executive Director, she helped grow the project’s work and impact in providing solutions to keep democratic processes safe. She guided D3P’s national initiatives, research and recommendations on cybersecurity and influence operation threats ahead of the 2020 Election.  Barsallo Lynch led the D3P team in producing guides such as D3P's Election Influence Operations Playbook, among other playbooks, resources and trainings shared nationally. She believes in the importance of helping decision makers and communities gain literacy in the growing fields of cybersecurity, technology innovation, and the space in between.

Barsallo Lynch is a Term Member of the Council on Foreign Relations. She is an author and collaborator on numerous efforts to further recommendations on issues in cybersecurity, technology, digital influence operations and national security policy. She recently co-led research on digital tools for COVID-19 mitigation and previously conducted research on data privacy.

Barsallo Lynch has rooted her work in seeking systemic change for challenging social issues by leading funding strategy and program implementation in the nonprofit and political arenas.  Her background includes serving as a Deputy Finance Director for Colorado’s U.S. Senator Michael Bennet and as Director of Development for the Knowledge is Power Program (KIPP) Colorado Schools. She was a Legislative Fellow with U.S. Senator Richard Blumenthal supporting his work as Ranking Member of the Subcommittee on Consumer Protection, Product Safety, and Insurance. Inspired by her family’s humble roots and her experiences as a Panamanian immigrant to the United States, Barsallo Lynch is also the founder of a social enterprise called DESDE.

Barsallo Lynch holds a B.A. from The Colorado College and serves on its Alumni Association Committee. She also holds an M.P.A. from the Harvard University John F. Kennedy School of Government. She is an alumna of El Pomar Foundation Fellowship and the International DO School Fellowship.