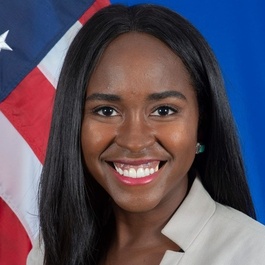 Mary Elizabeth Taylor is a Non-Resident Fellow at the Belfer Center for Science and International Affairs. Taylor has spent the past decade navigating the highest levels of the United States federal government, earning an esteemed reputation for building bipartisan consensus through challenging political environments.

From 2018-2020, Taylor served as the 32nd Assistant Secretary of State for Legislative Affairs, becoming the first African American and youngest person to hold the post. She was unanimously confirmed by the U.S. Senate. Reporting directly to the Secretary of State, Assistant Secretary Taylor served as the State Department’s lead interlocutor with the Legislative Branch, overseeing a team of 60 Department professionals facilitating dialogue and coordination with Congress.