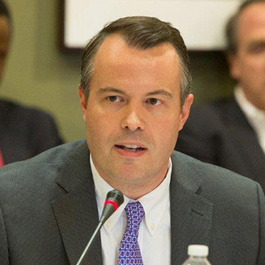 Matt Rhoades is the founder of Definers Public Affairs and one of America’s most accomplished political and public affairs professionals. He served as campaign manager for the Romney-Ryan 2012 presidential campaign, guiding Gov. Romney through a crowded primary to the Republican nomination.

Following the campaign, he founded America Rising in order to fill a void in the Republican Party’s communications, opposition research, and rapid response capabilities. Under Rhoades’ leadership, America Rising quickly became an indispensable tool in the Republican toolkit, orchestrating game-changing moments in races around the country and contributing to the party’s historic 2014 victories.

After working as a research analyst during the 2000 Florida recount, Rhoades joined the White House as an associate director for presidential personnel. He also served as research director for President George W. Bush’s 2004 reelection campaign and for the Republican National Committee, as well as communications director for Gov. Romney’s 2008 campaign.