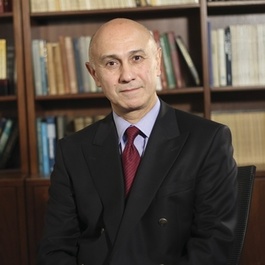 Najmedin (Najm) Meshkati is an Associate with the Project on Managing the Atom and a Professor of Civil/Environmental Engineering; Industrial & Systems Engineering; and International Relations at the University of Southern California. He is a Commissioner of The Joint Commission and a member of the Board on Human-Systems Integration (BOHSI) of the National Academies (Sciences, Engineering and Medicine). Between 2009-2010, he was a Jefferson Science Fellow and a Senior Science and Engineering Advisor to the Office of the Science and Technology Adviser of the U.S. Secretary of State. His current interests include nuclear safety, environmental sustainability, and developing cooperative regional approaches to nuclear fuel cycle management.

For the past 30 years, Meshkati has been teaching and conducting research on human factors, safety culture, and risk reduction of complex, large-scale technological systems, including nuclear power, aviation, refining, and petrochemical industries. As an expert on systems engineering, human factors and safety culture, Meshkati was selected by the National Academies to be a member on two national panels investigating two recent catastrophic events at Fukushima and Deepwater Horizon. He has inspected many nuclear power plants around the world, including Chernobyl (1997), Fukushima Daiichi and Daini (2012).

Meshkati is a Fellow of the Human Factors and Ergonomics Society and the 2015 recipient of the organization’s highest honor, the Arnold M. Small President’s Distinguished Service Award. He simultaneously received a B.S. in Industrial Engineering and a B.A. in Political Science in 1976, from Sharif (Arya-Meher) University of Technology and Shahid Beheshti University (National University of Iran), respectively. In 1978 he earned his M.S. in Engineering Management; and in 1983, his Ph.D. in Industrial and Systems Engineering from USC. He is also a certified professional ergonomist.