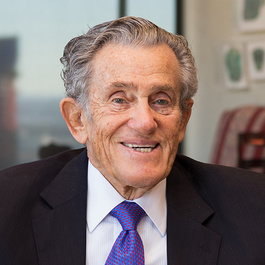 Bob Belfer graduated from Columbia College (’55) and the Harvard Law School (’58). He began a long career with Belco Petroleum Corp., a Fortune 500 company, where he was President for 20 years and named Chairman in 1985. The company engaged in exploration and development of oil and gas in the United States, Peru and Canada. Its assets now form part of EOG Resources. In 1992, Bob founded Belco Oil & Gas Corp., a leading independent producer of domestic oil and gas, listed on the New York Stock Exchange. In 2001, Belco merged with another company and its assets are now part of Anadarko Petroleum. He is currently Chairman of Belfer Management LLC, a private investment firm.

Bob is a member of the Visiting Committee at the Harvard Kennedy School. He is an active member of the Council on Foreign Relations and of Business Executives for National Security (BENS). He is a member of the Executive Committee and Vice Chairman of the Board of Overseers of the Weill Cornell University Medical College and is a former Chairman of the Board of Overseers of the Albert Einstein College of Medicine where he now serves on its Executive Committee. Bob is currently on the Board of the Dana Farber Cancer Institute where he has established the Belfer Institute for Applied Cancer Science. He has funded a Neurological Disease Consortium consisting of MD Anderson Cancer Institute, Baylor College of Medicine, MIT and Mount Sinai Hospital (NY). He is on the Board of Governors of the American Jewish Committee and the Weizmann Institute of Science. Bob is a member of the Chairman’s Council of the Metropolitan Museum of Art in New York and has funded the Mostly Mozart Festival at the Lincoln Center for the Performing Arts.