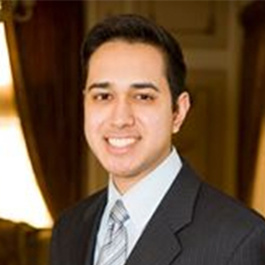 Mr. Desai is a recognized scholar in the fields of law and foreign policy. He has published extensively in these arenas, focusing primarily on US-India relations, diaspora politics, international security and law, sanctions enforcement, global governance, and corruption.

Until recently, Mr. Desai was a practicing attorney at the law firm of O'Melveny & Meyers LLP in Washington, DC where he worked on a wide range of litigation, regulatory, and public policy matters. He represented clients in front of the Committee on Foreign Investment in the United States (CFIUS), the Department of Commerce, and the House and Senate Ethics Committees. He also litigated in state and federal court on both the trial and appellate levels. He conducted white collar, export control, and Foreign Corrupt Practices Act (FCPA) investigations for individual and multinational clients around the world.

In addition to his private sector work, Mr. Desai has also worked extensively in the public sector.  Over the past decade, he has garnered exhaustive experience in the legislative branch, including with several Congressional Committees. In 2006, Mr. Desai was involved in efforts to help secure Congressional approval for the landmark US-India Civilian Nuclear Deal, which was signed into law by President George W. Bush that same year. He routinely advises Members of Congress on foreign policy matters.

Between 2007 and 2011, Mr. Desai worked with renowned scholars and Harvard Law School professors Lawrence Lessig and Phillip B. Heymann on a number of law and public policy related issues. As a former student fellow with the Belfer Center, he co-authored policy briefs focused on the United States and the Indian subcontinent.

Mr. Desai is member of the Aspen India Strategy Group, an International Security Fellow at New America, and a Fellow at the Truman National Security Project. He serves on the Board of Directors of the Partnership for a Secure America and the Washington Leadership Program. He also teaches a popular course on US foreign policy toward South Asia at the Johns Hopkins University.