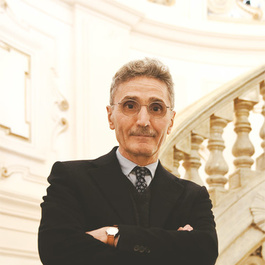 The following is Sergio Fabbrini's biography when he was affiliated with the Project in the 20219-20 academic year.

Sergio Fabbrini is Professor of Politics and International Relations and Dean of the Political Science Department at Luiss University in Rome, where he holds the Intesa Sanpaolo Chair on European Governance.  He is also Pierre Keller Visiting Professor at the Kennedy School, Harvard University (Spring Semester 2020). He co-founded and served as Director of the Luiss School of Government (2009-2018) and of the Trento University School of International Studies (2006-2009). He was the Editor of the “Italian Journal of Political Science” (Rivista Italiana di Scienza Politica) in the period 2004-2009 (the first editor after Giovanni Sartori who founded the journal in 1971 and directed it till 2003).

He was Recurrent Visiting Professor of Comparative Politics at the Department of Political Science and Institute of Governmental Studies, University of California at Berkeley. He was Jemolo Fellow at the Nuffield College, Oxford University, in the Spring Semester 2006. He was Jean Monnet Chair Professor at the Robert Schuman Center for Advanced Studies, European University Institute in Florence, in the Fall Semester 2001 and Visiting Professor in the Department of Political and Social Sciences, European University Institute in Florence, in 2004. He was Fulbright Scholar at Harvard University in 1987-1988.