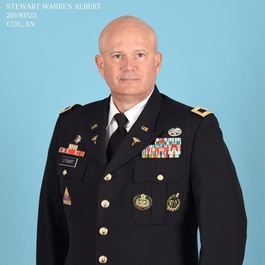 Colonel Warren Stewart is an Army nurse corps officer who recently served as the Battalion Commander of the 2nd Medical Recruiting Battalion at Redstone Arsenal, Alabama.  Previously, he deployed as the Chief, Clinical Operations for the Combined Joint Task Force – Operation Inherent Resolve in Camp Arifjan Kuwait and throughout Iraq.  Additional assignments include serving as the Clinical Operations Analyst, FORSCOM HQ at Fort Bragg, and as the Chief of the 28th Combat Support Hospital Emergency Department in Tallil Iraq.  Additionally, Warren served as the 3rd Brigade Combat Team, 1st Armored Division Nurse at Fort Riley, Kansas and Operation Iraqi Freedom 1.  He is a trauma nurse, and a graduate of the US Army Command and General Staff College, and he served as a RAND Arroyo Fellow in Santa Monica, CA where he participated in several Army and DoD sponsored research projects.  Warren holds a bachelor’s of science in nursing degree from Washburn University, a master’s degree in acute care, trauma and emergency nursing from the University of Maryland, Baltimore, and a doctor of nursing degree from Duke University. Warren holds three board certifications, which include acute care nurse practitioner, critical care nurse specialist, and emergency nurse.   Research interests include how the Army will conduct mass casualty operations in an anti-access/area denial environment that will likely be a hallmark of future battlefields.