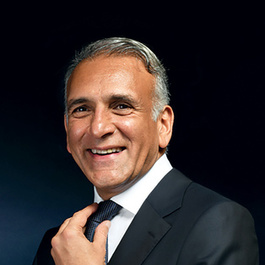 Ylias Akbaraly is currently the Chairman and CEO of the Groupe Sipromad and President of the Board of Thomson Broadcast. His group has gone on to grow successful businesses in various sectors ranging industry, renewable energy, real estate, technology, aviation, tourism, broadcasting and finance. The recent acquisition of Thomson Broadcast in august 2018 underscore the international ambitions of the Company.

In 20 years, Ylias Akbaraly successfully transformed the family Group into one of the most successful companies in Madagascar and in the Indian Ocean; the group has grown from 20 to over 3,000 staff with representative offices in Mauritius, Morocco, Seychelles, Mali and Paris. Now, Groupe Sipromad is expanding its footprint regionally and internationally. Through Thomson Broadcast, the Group operates in Kazakhstan, Ghana, Cap-verde, Israël, Bangladesh, India, Sri Lanka and France. ; and soon in United States, Canada, Russi a, Angola, Sierra Leone, Senegal, Indonesia and Philippine.

He is perceived to be a very discreet man, a sunshine transparency. He is very optimistic, full of energy, straightforward with a strong sense of observance of corporate governance policies.

He is a recipient of: the Pravasi Bharatiya Samman Divas Award 2009, the highest recognition from the Indian Government to a Non Resident Indian (NRI); the Pravasi Divas 2007 Award; the NRI (Non Resident Indian) Businessman of the Year 2006 awarded by the British Minister of Policing; the NRI Gold Medal for the Man of the Year prize; the Non-Resident Indians Prize for Excellence; and the National Order of Madagascar and Elevated Commander of the National order of Madagascar.

As part of his enhanced vision (we have the potential to have an impact on the future of our country in the region), Ylias Akbaraly builds through his Group Sipromad the highest tower in the Indian Ocean ; he is thriving to make Madagascar the dragon of the Indian Ocean.

He co-founded with his wife, Cinzia Catalfamo Akbaraly, in 2008 the Akbaraly Foundation, a humanitarian organization that aims to reduce poverty through the development of sustainable social projects in different fields: education, nutrition, health, children, housing. AF is at the moment focused on “4Awoman Project” to fight against women’s cancer in Madagascar and in Africa. With the American format, “TEDx Antananarivo event,” tackling the topic of cancer and awareness in Africa and Madagascar, in May 2011, the Akbaraly Foundation team made the event one of the top three most watched events on the internet worldwide that very day.

He is also a family man, with 4 children. He is living a quiet life with his wife Cinzia Akbaraly between Madagascar, Europe and United States and striving to make Madagascar through the Groupe Sipromad, a pride of the Indian Ocean and Africa.