CAMBRIDGE, MA –The Environment and Natural Resources Program at Harvard’s John F. Kennedy School of Government announced today that the Advancing Green Infrastructure Program - a public-private partnership in New Haven, Connecticut - is the winner of the 2018 Roy Family Award for Environmental Partnership. The partnership consists of the Urban Resources Initiative at the Yale School of Forestry and Environmental Studies, EMERGE Connecticut, Inc., the City of New Haven Department of Engineering, the Greater New Haven Water Pollution Control Authority, and Common Ground High School.

The prestigious Roy Family Award is presented every two years to celebrate an outstanding public-private partnership project that enhances environmental quality through novel and creative approaches. This year’s winning project was selected for its inclusive, replicable approach to dealing with the negative impacts of more frequent and intense rainfall events due to climate change.

The problem that confronts New Haven and led to the creation of the Advancing Green Infrastructure Program is that each year, 257 million gallons of combined sewage containing sediment, excess nutrients, heavy metals, and human waste flow into surface waterways surrounding New Haven. These combined sewage overflows (CSOs) occur during rain events when the capacity of the combined sewer system is exceeded, negatively impacting ecosystem health and public recreation opportunities within the Long Island Sound. In addition, critical areas within the City experience flooding during high intensity, short duration rainfall events. The contamination and flooding are the direct result of stormwater runoff from the City’s increasing impervious surface cover, which overload both the combined and storm sewer systems.

Constructing added capacity and separating the combined system is an ongoing, expensive, and disruptive process. As a result, the City of New Haven and Greater New Haven Water Pollution Control Authority (GNHWPCA) sought alternative, environmentally sound, sustainable, and cost-effective solutions that would complement and enhance the existing infrastructure to control urban flooding and CSOs. The use of a more natural approach led to the consideration of bioswales to help solve the problem. A bioswale is a landscaped area adjacent to the roadway designed to capture and infiltrate stormwater runoff from the street before it can enter a piped sewer system.

Urban Resources Initiative brought together all of the New Haven partners to participate in a 2014 grant opportunity from the National Fish and Wildlife Foundation. The grant allowed the partnership to develop a pilot project to build and monitor 15 bioswales and determine their effectiveness in New Haven soils. They conducted cutting-edge, scalable research for the advancement of green infrastructure and improvement of water quality in urban systems, and – through a green jobs training program – engaged the community through educational workshops with homeowners and employment of high school students and formerly incarcerated adults.

The pilot project was successful in demonstrating the effectiveness of constructing bioswales within the City of New Haven to reduce pollution from runoff and prevent street flooding. The partnership was able to secure funding for an additional 275 bioswales in New Haven—200 within the downtown drainage area to alleviate flooding and 75 within the combined sewer area to mitigate CSOs. The GNHWPCA determined that bioswales are a cost-effective enhancement to grey infrastructure and has the City’s support for continuing to build more bioswales in combined sewer areas of New Haven. 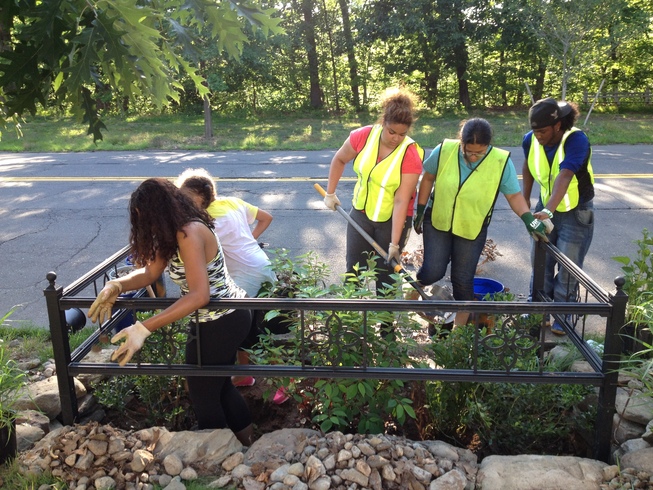 “The Roy Award selection committee was especially impressed with the program’s integration of social and environmental goals, a result of the deliberate cultivation of trust between the partners and the community,” said Henry Lee, director of the Environment and Natural Resources program at Harvard Kennedy School’s Belfer Center for Science and International Affairs, which coordinates the award. “We believe that this partnership demonstrates the impact of a highly-local, adaptive, iterative approach in addressing a critical environmental and municipal capacity challenge – and one that can be replicated in cities and towns all over the world.”

“As a low lying, coastal city, New Haven is already experiencing negative impacts of climate change – its successful effort to address this challenge will rely upon engagement by the entire community,” Mayor Toni N. Harp said. “The Advancing Green Infrastructure Program underscores the success that’s possible through collaborative, innovative partnerships. This program maximizes limited resources to achieve multiple objectives: mitigating the impacts of storm water runoff in an environmentally sustainable way, while creating meaningful employment for some of the city’s most vulnerable residents.”

“We are truly fortunate to be able to work with such extraordinary partners, which has allowed us to simultaneously address environmental and social challenges facing our city,” said Colleen Murphy-Dunning, Director of the Urban Resources Initiative. “Our collaboration has made it possible to connect resources to seemingly fragmented problems. Working with our partners through an integrated approach has led to solutions that bring co-benefits that would otherwise have been unrealized.”

“It is an honor to be recognized with the Roy Award for Environmental Partnership. Since its creation in 2005 as a regional water pollution control authority, GNHWPCA has been focused on protecting the environment. Alongside the City of New Haven, we seek out cost-effective solutions to combined sewer overflows in piping that dates to the Civil War. We saw the natural synergy to working with all of our partners on this project. Each organization and individual on the team brings a multitude of talents. We have all gained from each partners’ expertise. Our region and our customers have benefitted from this collaboration.”

“Bioswales are becoming a leading method to reduce and treat contaminated storm run-off while saving money when compared to traditional gray infrastructure. While bioswales are widely used, their effectiveness remains poorly understood. The Advancing Green Infrastructure Program was an opportunity for our students – future leaders in the environmental management arena – to learn about these systems and to contribute to our knowledge of how well they function.”

“At EMERGE, we realize that strong community partnerships are essential to achieving our high standard of outcomes for those returning to the New Haven community post-incarceration. The Advancing Green Infrastructure Program is an outstanding example of a partnership that truly changes lives. Not only has this partnership given incredibly valuable work experience and skillsets to EMERGE crewmembers, but the partners involved have worked tirelessly to advocate for and complement our greater social mission, and for that we are extremely grateful.”

“This partnership has provided exactly the sort of learning and leadership experiences that we strive to create for our Common Ground High School students: doing real work, solving pressing community problems, in collaboration with and in service of our neighbors in New Haven.”

About the Advancing Green Infrastructure Program

The Urban Resources Initiative (URI), a non-profit housed at the Yale School of Forestry and Environmental Studies, has been actively engaged in community forestry activities throughout New Haven since 1991. In 2007 URI started GreenSkills, a local green jobs program that employs student interns from Common Ground High School and ex-offenders, through EMERGE, on urban forestry-tree planting projects. URI was looking to expand their projects beyond forestry and the City Engineer suggested looking at bioswales to mitigate street flooding. In 2014, URI received a grant from the National Fish & Wildlife Foundation to start a pilot project on green infrastructure, focusing on installing bioswales, which URI named the “Advancing Green Infrastructure” project.

The City of New Haven Department of Engineering, the GNHWPCA, and Yale F&ES faculty joined the Advancing Green Infrastructure Program and worked together to determine key locations to install and monitor the bioswales. The Department of Engineering and URI staff tested multiple construction designs. Yale F&ES faculty and students installed monitoring devices on the bioswales and collected and analyzed data on the effectiveness of the system. URI continued its partnership with Common Ground High School and EMERGE – with the high school students conducting surveys and community outreach, and the EMERGE workers doing the construction and installation work. 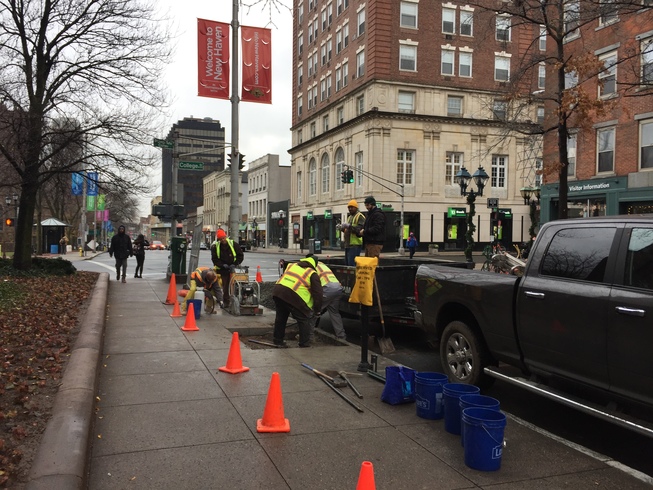 About the Roy Family Award

The Roy Family has been a long-time supporter of the development of cross-sector partnerships to meet social and environmental goals. The Roy Family Award for Environmental Partnership provides positive incentives for governments, companies, and organizations worldwide to push the boundaries of creativity and take risks that result in significant changes that benefit the environment.

This year marks the eighth time that the Harvard Kennedy School has bestowed the award. The California Healthy Nail Salon Program, a partnership between the California Healthy Nail Salon Collaborative, Asian Health Services (AHS), and five city and county government departments won in 2016. The Program addresses the environmental health and justice issues faced by workers in the salon industry and works to standardize safe, pollution prevention salon practices that can be implemented nationwide and globally.

The 2013 Award recognized the Dow-TNC Collaboration, a partnership between The Dow Chemical Company and The Nature Conservancy to help companies understand how to integrate the value of forests, watersheds, and biodiversity into more sustainable business and community decisions.