A couple walk at the Tzitzernakaberd memorial to the victims of mass killings by Ottoman Turks, in the Armenian capital Yerevan, Armenia, Wednesday, Oct. 30, 2019. The U.S. House of representatives has voted overwhelmingly to recognize the century-old mass killings of Armenians by Ottoman Turks as genocide. The move is a clear rebuke to NATO ally Turkey in the wake of its invasion of northern Syria.

One of the deadliest sites of the Armenian genocide – Ras al-Ayn – has once again fallen under Turkish control because of a ceasefire agreement negotiated by the United States. The incursion of Turkish-backed rebels in the swath of land ceded to Turkey has forced Armenian families to flee – one century after their ancestors fled those who sought to exterminate them. When Turkish President Erdogan visited the White House on November 13, President Trump failed to mention the ethnic cleansing campaign and assault on the descendants of Armenian genocide survivors. 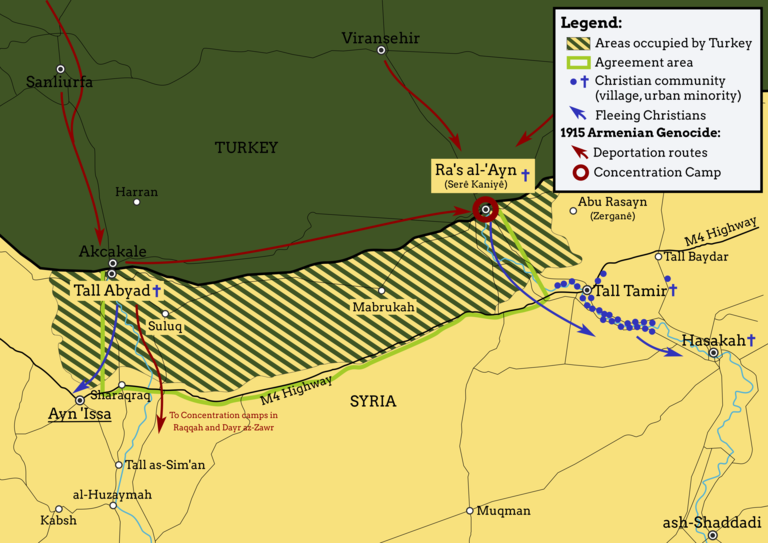 The October 17 Ceasefire Agreement negotiated by the US allows Turkey and Turkish-backed Rebels to occupy regions where the Armenian Genocide took place. Gargari Maps 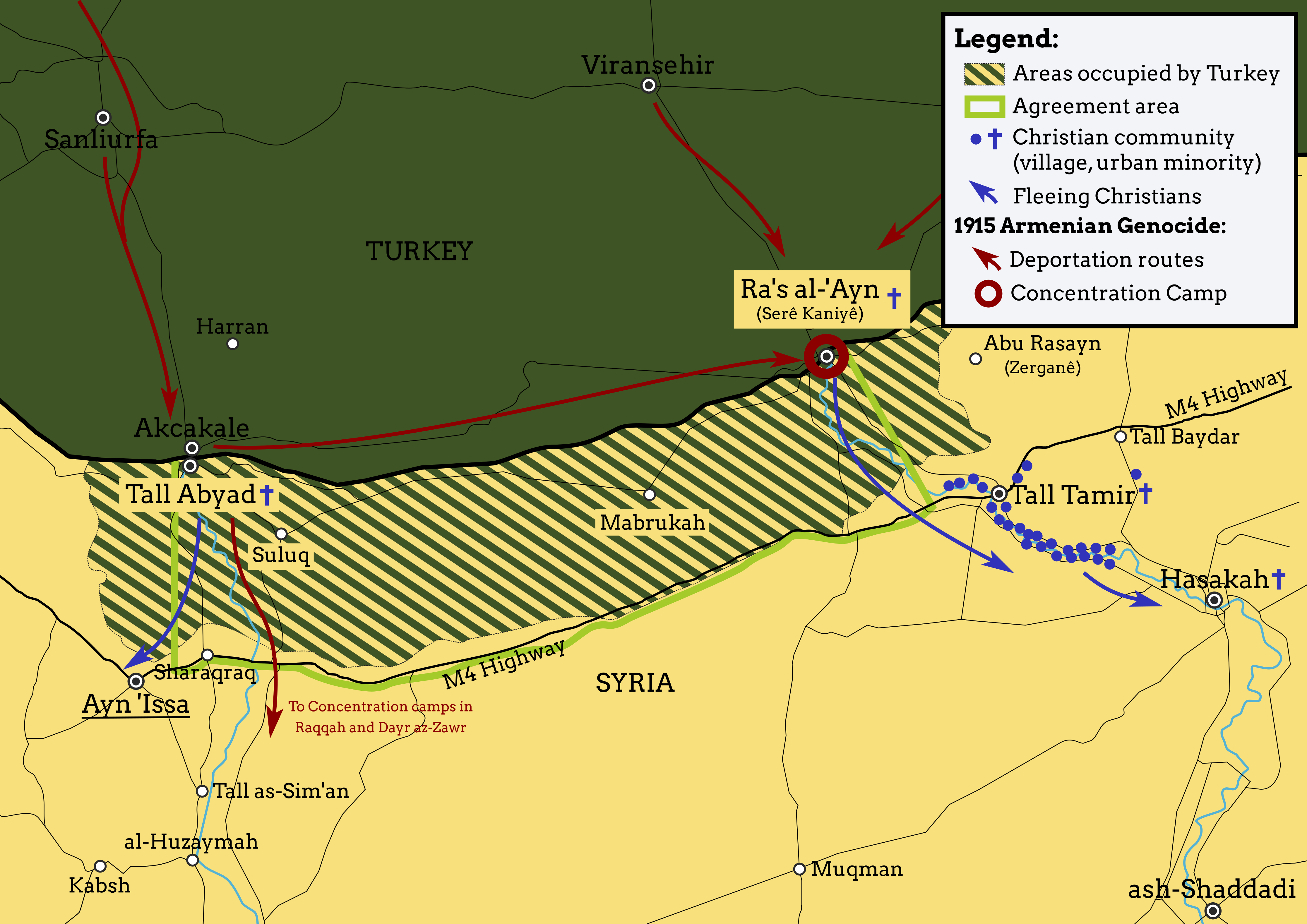 The October 17 Ceasefire Agreement negotiated by the US allows Turkey and Turkish-backed Rebels to occupy regions where the Armenian Genocide took place. Gargari Maps

The U.S. President paved the way for Turkey’s military to invade northern Syria earlier this fall when he ordered the withdrawal of U.S. troops against the advice of the U.S. military, key advisors, and members of Congress from both political parties.

Now, more than 100 years after the Armenian genocide, the United States negotiated a deal that ceded a swath of land between Tel Abyad and Ras al-Ayn (Serêkaniyê in Kurdish) to Turkey, granting Erdogan’s regime de-facto occupation of additional Syrian borderlands.

In 1915, long-held fears of territorial dismemberment and anti-Armenian sentiment led the Ottoman Turkish government to launch a brutal campaign against its Armenian population, who were killed, forced into Muslim households, or deported into remote areas to perish. Ras al-Ayn became one of twenty five concentration camps where deported Armenians from Anatolia were settled temporarily.  In 1916 the Ottoman government ordered the massacre of Armenians in two major camps (the other in Deir Ezzor is known as “Armenia’s Auschwitz”). An estimated 70,000 Armenians in Ras al-Ayn alone were killed by Turks and their militias. They were buried in mass graves or just left in open fields where bones of victims can still be found today.

Those who survived put down roots in the area, which enabled a multiethnic society to develop in northeastern Syria. The current cross-border military operation, however, seeks to change these dynamics permanently. Houses owned by Armenians, as well as other Christian and Kurdish families are being looted by Turkish-backed militias. “Taken by al-Jabha al-Shamiyya” has been scrolled on the gates of their homes to signal to other Turkish-commanded militias that the properties had already been confiscated.  Since the start of the Turkish assault, known as Operation Peace Spring, more than 200 civilians have been killed and hundreds of thousands have been displaced. All 30 Armenian families living in the region recently ceded to Turkey between Tel Abyad and Ras al-Ayn/Serêkaniyê have reportedly fled. Armenians are also under attack by the Islamic State (ISIS) in other parts of Northeast Syria. Just recently, Ibrahim Hevsop Bedo, an Armenian-Catholic priest, and his father were killed by ISIS gunmen while traveling to Deir Ezzor to restore an Armenian Catholic church. 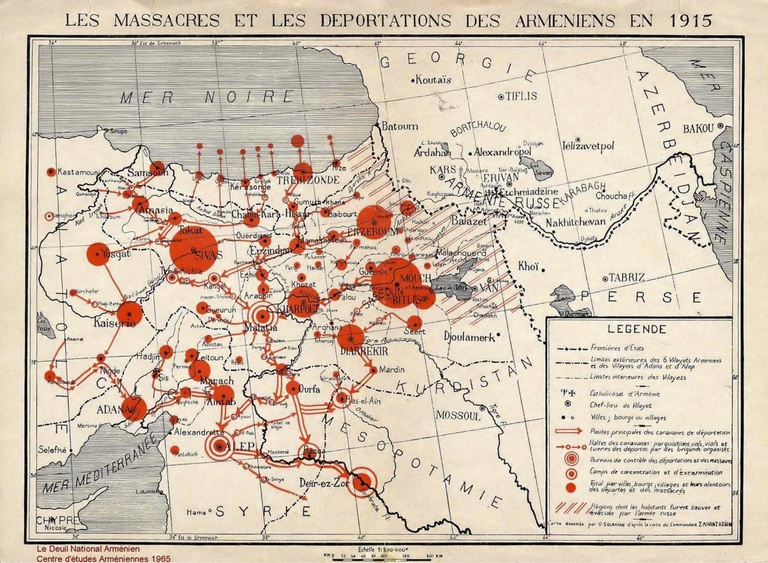 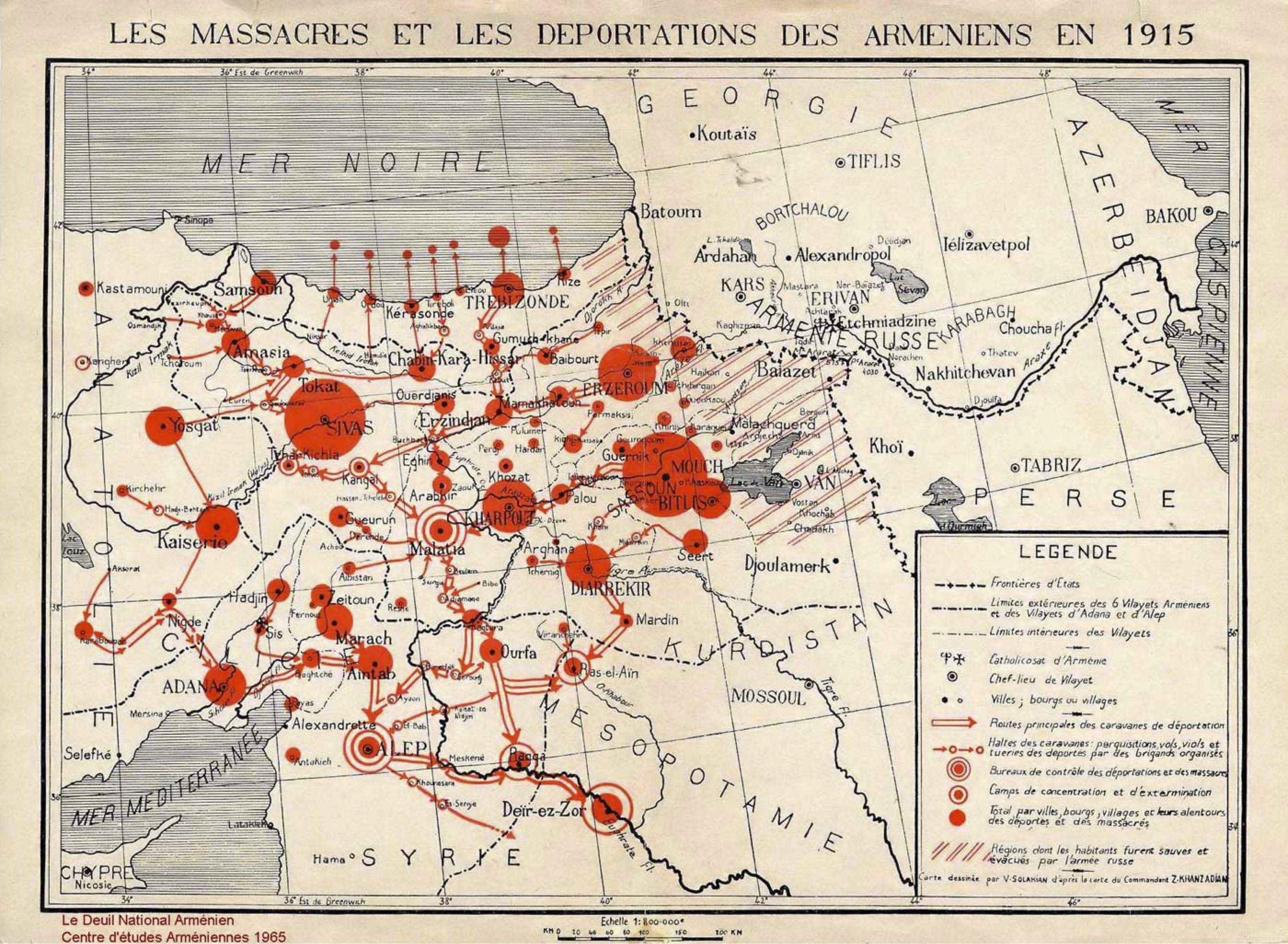 The Turkish incursion has now forcibly displaced approximately 300,000 people from the so-called “safe zone” where Turkish-backed militias operate under the umbrella of the “Syrian National Army” and include groups known for their brutality including Ahrar al-Sharqiya, Jaysh al-Islam, Sultan Murad, al-Jabha al-Shamiyya, Hamza Brigade, and others.  On October 12, Hevrin Khalaf, a Kurdish female politician and head of the Syria Future Party, was captured and executed by Ahrar al-Sharqiya. Amnesty International referred to her murder and other summary executions as war crimes. In recent testimony, Syria Envoy James Jeffrey acknowledged that the State Department was investigating crimes committed by Turkey and Turkish-backed rebels. In a leaked memo, Ambassador William Roebuck, the top American diplomat working in northern Syria, wrote: “Turkey’s military operation in northern Syria, spearheaded by armed Islamist groups on its payroll, represents an intentioned-laced effort at ethnic cleansing.”

President Erdogan publicly announced at the United Nations General Assembly intentions to deport Syrian refugees living in Turkey into the areas now being depopulated by Turkey and its militias.  The forced return of refugees into a war zone is illegal under international human rights law, yet Erdogan’s plan has not been denounced strongly by world leaders, in part because he regularly threatens to send Syrian refugees and captured ISIS members to Europe and other countries.

In recent days, the House of Representatives recognized the Armenian genocide and condemned the murder of about 1.5 million Armenians. On the same day, the House also passed a bill sanctioning Turkey for recent actions. While these actions are long overdue, the decision to move this legislation now signals unprecedented congressional anger at Turkey, a NATO ally that will remain mostly rhetorical as the Senate is unlikely to pass a genocide resolution or adapt meaningful sanctions.

Ignoring and rewarding Turkey’s increasingly authoritarian ruler sends a terrible message, condoning ongoing war crimes by Turkish forces and allied militias in Syria. Some of these groups actually film themselves carrying out executions of civilians.

Turkey and Turkish-backed militias should be sanctioned, and displaced families should be allowed to return to their homes. The United States should not lend its support for the Turkish government’s goal of re-engineering the demographics of a geography already stained by genocide a century ago.  It is not too late to reverse some of the damage that has been done.

Amy Austin Holmes is a visiting scholar at the Middle East Initiative of Harvard University, and the author of Social Unrest and American Military Bases in Turkey and Germany since 1945, (Cambridge University Press). She has carried out research in Northeast Syria since 2015, and has conducted the first survey of the Syrian Democratic Forces.  Lerna Ekmekçioğlu is an Associate Professor of History at MIT and the author of Recovering Armenia: The Limits of Belonging in Post-Genocide Turkey, published by Stanford University Press. She studies and teaches about women’s experiences during and after wars.

*** To watch a clip from Amy Austin Holmes' video interview on this subject, click here.

Statements and views expressed in this commentary are solely those of the author and do not imply endorsement by Harvard University, the Harvard Kennedy School, or the Belfer Center for Science and International Affairs.

– Via Belfer Center for Science and International Affairs, Harvard Kennedy School.
For more information on this publication: Belfer Communications Office
For Academic Citation: