“A Chinese maxim says that the journey of 1,000 miles begins with the first step. The road from where we are now to the complete denuclearization of North Korea stretches at least 1,000 miles. So declaring victory at this point would be foolish. On the other hand, if one compares where we are today with where we were six months ago when we saw real prospects of “fire and fury,” we can be thankful that Trump has taken a first big step down the most promising feasible path available at this point.”

“The Trump-Kim summit is a big step in the right direction, away from the brink and onto the path of diplomacy, though virtually all specifics remain to be settled. Hard talks will be needed to translate today’s potential into real results, focused on reducing the nuclear threat and the risk of inadvertent war on the Korean Peninsula. As Winston Churchill reminded us, ‘jaw-jaw’ is better than ‘war-war.’”

“The Singapore Summit was a good beginning and powerfully symbolic. But, the agreement was paper thin and without commitments or accountability for Kim. I also fear that Trump is overselling the imminence of peace. This is a first step in a long negotiation process requiring strategy and patience. Trump needs to bring South Korea and Japan—vital U.S. allies—into the process and keep China close. It is worrisome that Trump appears not to have consulted Seoul on his promise to stop joint military exercises. This and his erratic G7 Summit devalued major U.S. alliances that magnify American power in the world.”

“Diplomacy with North Korea on denuclearization is preferable to crises and escalation. But how much confidence can we have that negotiations will get off the ground when the Singapore summit failed to specify clear goals or any notion of a timeline? There is a lot riding on Secretary Pompeo’s ability to set up a process robust enough to withstand predictable North Korean foot-dragging on denuclearization, South Korean and Japanese demands for reassurance, and opposition inside the United States to offering further inducements to Pyongyang to move ahead. It is clear we cannot depend on coherent leadership from the president.”

“Nuclear weapons are central to the legitimization of the oxymoronic Communist monarchy that rules North Korea. When I was in the Clinton Administration, Kim’s grandfather lied to us about their nuclear program; his father lied to Presidents Bush and Obama. Why should we believe yet another promise to denuclearize? The danger of a cosmetic “breakthrough” would be if we allow it to weaken our alliances with Japan and South Korea. Prolonged negotiations are much better than war, but we must remember that behind the lipstick there remains a pig.”

“Thin on details, the “Sentosa Statement” generates important nascent momentum. The task ahead is how to harness and direct that momentum toward achieving a full package deal. President Trump and Chairman Kim have created rare political space for other mechanisms — i.e. peace mechanism and inter-Korean transportation infrastructure development mechanism — to potentially move forward. A key obstacle ahead will be some actors’ use of the “Sentosa Statement” as a justification to further ease implementation of sanctions without linkage to denuclearization actions to maximize narrow national interests. The biggest challenge will be developing a robust verification and inspection regime — an endeavor that will test the resilience of the fledgling U.S.-North Korea working partnership. The track record in this regard has been grim.”

“The Singapore Summit established personal relations between President Trump and Chairman Kim and begins a new round of US-DPRK negotiations on denuclearization, peace, and normalization of bilateral relations. Secretary of State Pompeo must now seek agreement on highly contentious issues, including the linkage among the three objectives, phasing, reciprocity, timeline and verification. It will take months if not years to determine whether Kim Jung Un is serious about denuclearization or whether the Singapore declaration - like previous US-DPRK joint statements - are empty promises. Nonetheless, the summit is a positive development worth pursuing.”

“I would agree that this is a good thing that these two leaders met - that it breaks ice, that it does create a relationship… As far as the agreement is concerned, I went back and looked at previous agreements….We have not only been here before, but we’ve been here before with much greater specificity. So Mike Pompeo needs to go back and understand a little bit more about history and go forward with a team that knows what they’re doing.” (Morning Joe, 6/12/18)

“The investment in diplomacy is laudable, but this agreement lacks critical content on denuclearization: No specifics on dismantlement and destruction of nuclear warheads and delivery systems, no specifics on continuing manufacture of HEU and plutonium or disposition of existing stocks, no specifics on closure and cleanup of sites, and no specifics on intrusive inspections and monitoring. In exchange, Trump gave too much too soon, offering security guarantees to NK and cancelling U.S.-ROK military exercises. Given NK’s history of cheating, these major concessions should require tangible proof of substantial and durable reductions in NK’s threat to the region and U.S. homeland.”

“'Kick Canada, kiss Kim’ is an incoherent and immoral strategic concept. At the end of the first inning, the score is Kim 3, Trump 0. Kim accomplished three longstanding objectives: he, a 34-year old totalitarian leading a desperately poor country, met as an equal the leader of the most powerful nation on earth; “President Trump committed to provide security guarantees to the DPRK;” and, halting U.S.-ROK joint military exercises. In return, Kim made only a vague promise to denuclearize the Korean Peninsula, with no specifics on timing or verification—a commitment lacking even the details of past broken promises.”

"Sensitive negotiations on routine issues are normally conducted from the bottom up, with seasoned diplomats producing pre-cooked agreements before senior leaders meet. But negotiations between such bitter antagonists as North Korea and the US are anything but routine. There is a narrow window for success if senior leaders first establish trust by talking to rather than past each other, with subordinates then firmly dispatched to work the knotty details. This first step may have happened—but will their subordinates deliver? An extraordinarily tricky journey now begins, and will only succeed if reversible is exchange for reversible, and irreversible for irreversible.”

“The summit outcome is very disappointing. The US has given Kim a lot, a meeting with the US President and cancelled military exercises and in exchange for vague commitments to pursue disarmament. While future engagement is better that the risks of war we saw in 2017, this agreement does nothing to advance denuclearization in North Korea. There remains a slight chance to build from here to a good outcome, but for now this summit should be seen as all style and no substance.”

“The historic Trump-Kim summit is a huge jump-starter for the North Korean denuclearization process. Importantly, there should be a roadmap that clearly enumerates a timeline of specific actions toward the ultimate goal of denuclearization. In practice, North Korea could potentially offer “hard” pledges that, once implemented, are difficult to reverse because they involve physical hardware or infrastructure. “Soft” political commitments from the United States would be easier to reverse if North Korea did not follow its commitment to nuclear disarmament. Breakthroughs toward denuclearization must be preceded by a peace treaty and normalization of relations with North Korea.” 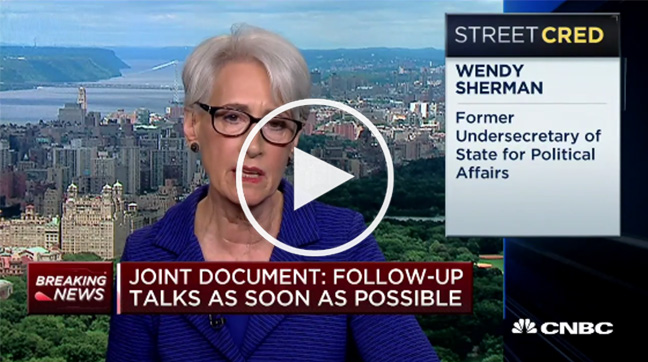