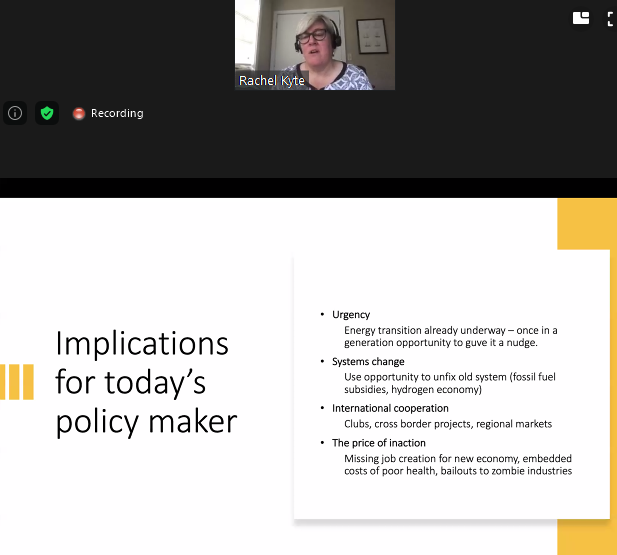 A recording of this webinar is available here.

The dean of the Fletcher School of Law and Diplomacy at Tufts University highlighted both the opportunities and potential pitfalls for green energy transitions as countries of the world recover from the economic calamities wrought by the COVID-19 pandemic. Rachel Kyte spoke Wednesday (August 19) on the topic of “Using the Pandemic Recovery to Spur the Clean Transition” during a virtual forum sponsored by the Harvard Project on Climate Agreements (HPCA), and hosted by Robert Stavins, A.J. Meyer Professor of Energy and Economic Development at Harvard Kennedy School. This series, HPCA Conversations on Climate Change and Energy Policy, features leading authorities on climate-change policy, whether from academia, the private sector, NGOs, or government.

Citing the fact that 180 nations are currently teetering on the brink of depression, Kyte called the current moment an “opportunity as a pivot to a trajectory that would get us closer to being on track for the kind of economic pathway forward that we would need to reach zero net emissions by mid-century … in order to combat the worst impacts of climate change.”

Leveraging that opportunity, however, will be complicated, Kyte explained, noting that the severe economic stress caused by the pandemic is “testing the boundaries of international solidarity.”

It is imperative, Kyte argued, for citizens, institutions, and governments to recognize the severity of this moment, and to muster the political will and capacity needed to address the severe economic pains caused both by the pandemic and unmitigated climate change.

“We will really be putting pressure on the systems that are normally in place to support that — the IMF, the multinational development banks, the role of central banks,” she pointed out. “In these economic crises, it is the least well off, the most vulnerable, and the most vulnerable to climate change, who are impacted the most. And what we're looking at is wiping out the advances that have been made in poverty alleviation over the last few years. That has huge impacts for the way we think about vulnerability to climate change going forward.”

Over the short-term, however, Kyte admitted that the economic contraction has reduced carbon dioxide (CO2) emissions as global energy demand is expected to fall by approximately six percent this year compared to last. But demand will pick back up when economies rebound, she explained, unless there are systematic efforts to change it. Those efforts, she remarked, can be strategically incorporated into economic relief packages that will continue to emerge.

“There are, I think, a number of think tank groups, [and other] regional bodies now suggesting that there are clear policy priorities in order to be able to hit that sweet spot of short-term recovery, but also a cleaner and faster pathway down the energy transition,” Kyte remarked. She specifically cited the need for green “shovel-ready” projects aligned with rescue plans for distressed industries that adhere to a pathway of deep decarbonization and increased energy efficiency. Kyte also discussed the need for smart private finance and investment in green technologies and sufficient international cooperation necessary to spare developing countries crushing debt loads that would cripple their climate change mitigation efforts.

Referring to the nature of such a green energy pivot, Kyte remarked that, “We're at a moment where we need both scaffolding and scholarship or new design. The scaffolding is that we have an international system that helps us respond to pandemics, that helps us respond to economic crises, and that should help us to respond to climate change. And that system is really underperforming, at risk, and under strain. So we have to, in this immediate phase, put scaffolding around it and help it limp forward and help us all limp forward together.”

Kyte fielded a number of questions from members of the audience, addressing the risks of economic rescue packages that actually worsen the effects of climate change, the potential for reductions in Overseas Development Assistance budgets to the developing world, the challenges of green aid in Africa, obstacles facing the United Nations Framework Convention on Climate Change (UNFCCC) in making substantive progress, Mexico’s mixed record on climate change policy, and potential incentives to encourage developing countries to adopt green recovery trajectories.

The next HPCA Conversation on Climate Change and Energy Policy is scheduled for September 8 with guest Joseph Stiglitz, University Professor at Columbia University and Chief Economist of The Roosevelt Institute. Please register in advance for this event on the HPCA website.

The future of the Middle East is about the decline of U.S. power and new internal dynamics, positive and negative, that are filling the vacuum.
More from David Ignatius

In 2020, America has learned that no wall is high enough to keep virulent pathogens from crossing national borders.
More from Linda J. Bilmes

The biggest problem is that the P5 have widely divergent perspectives on the key points of tension in their relationships.
More from Russia Matters