The first global conference focused on plastic pollution in the Arctic Ocean, the International Symposium on Plastics in the Arctic and the Sub-Arctic Region,  will be hosted virtually in early March.

The buildup of plastic in the Arctic Ocean is a growing challenge in the region and a bellwether on plastic threats to all oceans. An estimated eight-million metric tons of plastic enters the ocean worldwide every year, and over the last decade, the amount of plastic debris in the Arctic has increased considerably.  Shrinking ice coverage caused by climate change has allowed plastic debris to flow into the Arctic Ocean as never before. This poses risks to delicate Arctic ecosystems and to Arctic nations whose economies are intertwined with Arctic Ocean health.

The symposium is led by the Government of Iceland and the Nordic Council of Ministers and part of a larger initiative by the Icelandic Chairmanship of the Arctic Council and the Arctic Council Working Group on the Protection of the Arctic Marine Environment (PAME), to develop and implement the first Regional Action Plan to begin tackling the challenge of plastic pollution in the Arctic region. As a Symposium Partner and member of the scientific organizing committee for this conference, and an early convener in this collaborative effort to develop of a Regional Action Plan to address plastic pollution, The Arctic Initiative at the Harvard Kennedy School’s Belfer Center has played a key role in fostering a policy discussion around tackling the problem of plastics in the Arctic Ocean. 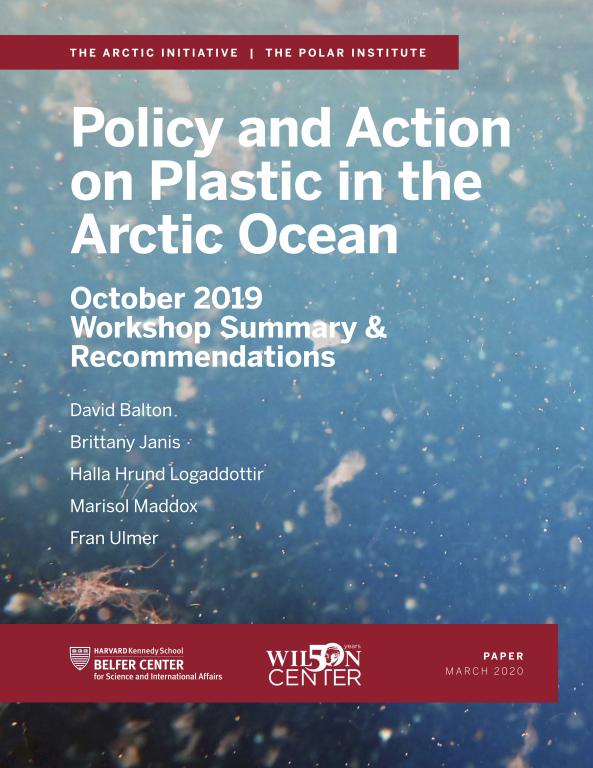 The Arctic Initiative seeks to develop new insights and collaborations that will bring together science, technology, and policy to address the environmental, economic and social challenges facing the Arctic. In October of 2019, the Belfer Center’s Arctic Initiative and the Wilson Center’s Polar Institute co-hosted a workshop with the Icelandic Chairmanship of the Arctic Council at Harvard Kennedy School entitled, Policy and Action on Plastic in the Arctic Ocean. This event convened over 60 global thought leaders, diverse stakeholders, and subject matter experts to begin developing a framework for tackling Arctic marine plastic pollution as part of the Icelandic Chairmanship’s ambitious agenda.

Halla Hrund Logadottir, Co-Founder and Co-Director of the Arctic Initiative remarked on the progress since the 2019 convening; “It’s extremely gratifying to see this global Symposium come together as Arctic nations seek to address and find solutions to the critical issues of plastics in the ocean. The Arctic Initiative is honored to have worked with our collaborators at the Wilson Center and the Icelandic Chairmanship to open broad discussions on this issue in 2019 that are now contributing to this ongoing policy dialogue.”

This vital early-convening resulted in the creation of a subsequent report also entitled “Policy and Action on Plastic In the Arctic” which was co-published by the Arctic Initiative and the Wilson Center’s Polar Institute in April of 2020.  Since its publication this report has served as a resource to PAME in their development of an Arctic Regional Action Plan to address plastic pollution.  Magnús Jóhannesson, the Arctic Council Special Coordinator on Plastics Pollution and Marine Litter, said of the report “Most of the strategy action recommendations from the Belfer Center report are on the table in the discussion for the development of the regional action plan.”

This report will be featured as a keynote in the Symposium on Plastics in the Arctic and as part of the final panel on March 9, which is focused on the topic of “Ways Forward”. A recording of key findings from the Policy and Action on Plastic In the Arctic report which will be presented at the conference can be viewed here.

As the Arctic Council and PAME continue their efforts to address the challenge of plastic pollution in the Arctic with the Russian Chairmanship beginning in May, this International Symposium on Plastics in the Arctic and the Sub-Arctic Region will provide a valuable venue to exchange views, better understand the threats plastic pollution poses to ocean life, and continue to iterate on possible solutions.

For more information on this publication: Belfer Communications Office
For Academic Citation: “A Global Symposium on Plastics in the Arctic .” Press Release, February 26, 2021.