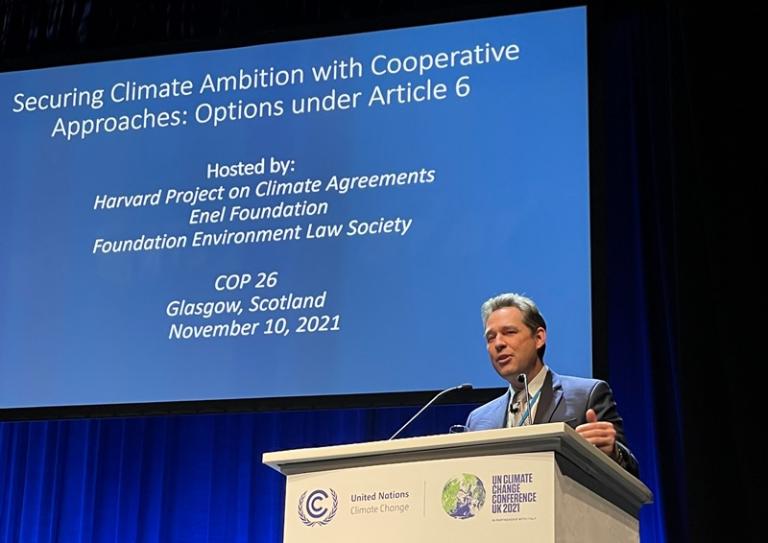 With negotiators from around the world hammering out the details of a revised global climate deal at the 26th Conference of the Parties (COP26) of the United Nations Framework Convention on Climate Change (UNFCCC) in Glasgow, Scotland, much of the work is centered on reaching agreement on a set of rules governing the global carbon market. The so-called “Rulebook” for implementing Article 6 of the landmark 2015 Paris Agreement is considered by many to be critically important for enhancing ambition among countries for the plans and pledges contained in their Nationally Determined Contributions (NDCs). Potential solutions to achieve consensus on the Article 6 Rulebook were the focus of discussion Wednesday (November 10) at a COP26 side event titled “Securing Climate Ambition with Cooperative Approaches: Options under Article 6” co-sponsored by the Enel Foundation, the Foundation Environment – Law Society, and the Harvard Project on Climate Agreements (HPCA).

HPCA Director Robert Stavins, the A.J. Meyer Professor of Energy and Economics Development at the Harvard Kennedy School, moderated the discussion beginning with an overview of the challenges involved in the Article 6 negotiations, specifically the design of rules to facilitate voluntary cooperation among parties, which can greatly decrease costs and thereby facilitate and encourage increased ambition in NDCs over time, which can drive down overall carbon emissions.

“The individual contributions themselves are not going to live up to the hopes and aspirations of many people. They are not going to be judged to be sufficient because this is a global commons problem and therefore every party that participates incurs the full costs of participation of reducing emissions, but the benefits of reducing emissions are spread globally,” Stavins remarked.

“One approach that can help is international linkage of regional, national, and even sub-national policies from different parts of the world,” Stavins continued. “By linkage…I simply mean connections among policy systems in different jurisdictions that allow for emissions reduction efforts to be redistributed across systems voluntarily.”

Michael Mehling, Deputy Director of the Center for Energy and Environmental Policy Research (CEEPR) at the Massachusetts Institute of Technology (MIT) and author of a recent HPCA paper about Article 6, cited a recent study showing that the provision would effectively enable the doubling of ambition under current NDCs without additional cost, and could result in transfers between jurisdictions of as much as $1 billion per year by 2050.

“The stakes are high because a number of parties have already indicated their intention to rely on Article 6 as a source of finance or as a flexible means of achieving their NDCs at lower cost,” Mehling continued. “This is an important debate, but all of this with the caveat that if Article 6 is conceptualized in a way that undermines integrity…then any ambition gains might be undermined.”

Mehling outlined what he believes are the three most critical Article 6 negotiation issues at COP26: accounting for reductions outside the scope of Party NDCs under Article 6.4, which establishes a central UN mechanism to trade credits from emissions reductions generated through specific projects; generating finance through a “share of proceeds” from Article 6.2, which provides an accounting framework for international cooperation, to support adaptation action; and transitioning “legacy units” generated under the Kyoto Protocol prior to 2020. All three points eluded consensus in the two previous COPs, Mehling noted, and remain dicey political issues that will require much compromise to reach agreement.

“The decisive question is — have views changed over the past 24 months to warrant agreement now in Glasgow? One important thing that has happened is there has clearly been much better understanding of some of the implications of these options [on the table],” he stated. “Yet…compromises will be needed, so there is still a lot of political work to be done.”

While there is an appetite for a Rulebook, Mehling stated, it needs to be crafted well to be successful.

“The Parties did agree to have Article 6 in the Paris Agreement. There is a desire to have this mechanism for voluntary cooperation, but they clearly stated it has to be for greater ambition and to promote environmental integrity. That balance between prescriptiveness and flexibility is what’s at stake in the negotiations,” he explained. “Neither the most restrictive nor the most permissive outcomes would actually be the most favorable for greatest ambition…A balanced outcome is needed.”

With a temporary break in the negotiations, Martin Hession, the European Union’s Chief Negotiator on Article 6, joined the panel, explaining that two of the thorniest issues to be resolved include  the prevention of double counting of emission credits and operationalizing the “share of proceeds” under Article 6.

“The question is how do we broker a deal that everybody goes home happy with?,” he asked. “It’s always been our position that the [Article] 6.4 mechanism needs to be more ambitious. The problem with the Paris text is that we had no clear references on the ambition there, so we have worked, particularly at this conference, to build a broad coalition around having a much more ambitious mechanism to replace the CDM [Clean Development Mechanism].”

Hession admitted that the Article 6 details that will provide a pathway for a global carbon market will need time to be ironed out.

“The priority for us is to get the rules right because we can’t come back and renegotiate this again constantly," he said. “We will have a work program to implement the details of the things that we agree [on], but it is taking time because it’s taken time for the world to adjust to the idea that we’re going toward net zero and the markets need to reflect that. Markets are a means to an end, and we need to make sure that this fits within a very clear framework of a trajectory to net zero with all the complications involved.”

Daniele Agostini, Head of Low Carbon and Energy Policies at the Enel Group, emphasized the upside of using market-based mechanisms to both reduce costs and increase benefits from enhanced ambition.

“For us, we are looking at the cooperation that Article 6 is going to trigger,” he said. “Those benefits are going to allow stakeholders to come together on the ground — local government, local project developers — to actually accelerate the way we build projects. We have a strong pipeline. We just need to accelerate it and Article 6 can catalyze action.”

Agostini also expressed his hope that negotiators will develop dynamic baselines that can adapt to changing conditions over time.

“We need to make sure there is a high level of environmental integrity, but we also have to understand that things will change very rapidly over the next five to ten years, so spending five years to define rules today that will be obsolete by the time they get implemented is not a good way forward,” he argued.

The panel fielded questions from members of the audience on topics ranging from the value of climate clubs and alliances to the scope of emissions that will be covered under Article 6.

Two panelists who had been scheduled to participate — Kelley Kizzier, Vice President for Global Climate at Environmental Defense Fund and a former Article 6 climate negotiator, and Mandy Rambharos, General Manager for Just Energy Transition, Eskom Holdings (South Africa) — had to withdraw just hours before the session due to scheduling conflicts at the COP.

The discussion was livestreamed around the world on YouTube, and the video has been archived in the COP26 side events playlist for later viewing.