How to Build Electoral Hegemony: Shifting Strategies in the Targeting of Turkey's Transport Infrastructure Investment 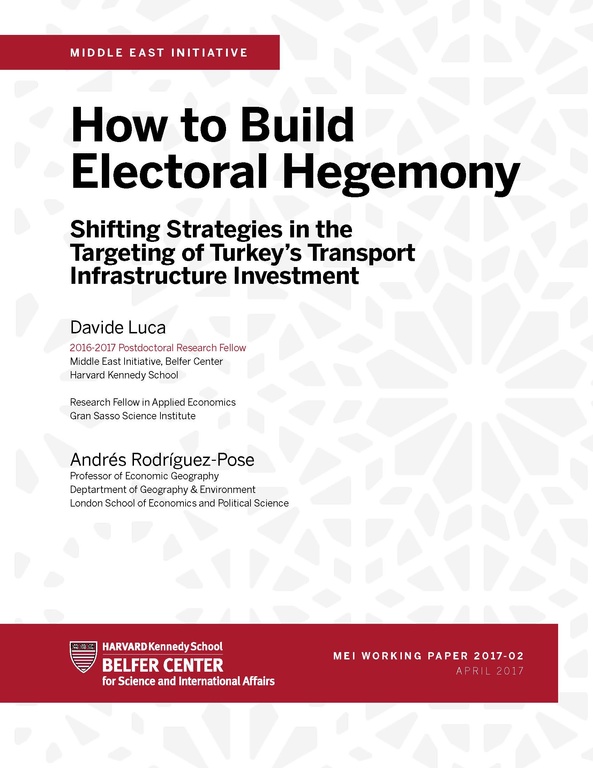 Does the use of public infrastructure to punish and reward constituencies change along with increases in the electoral success of incumbents? The paper develops a conceptual framework showing how stronger governments aspiring to electoral hegemony may intentionally decide to reduce and redress the territorial targeting of public goods as a political strategy. We then test such idea on the case of Turkey, where the incumbent AK Party has remained a dominant force since its first 2002 electoral victory. The analysis employs a multimethod research strategy combining public transport investment data for 2004-2012 with fieldwork involving in-depth interviews of bureaucrats in charge of investment management. The results, which are robust against different specifications, show how the increase in power of an incumbent government have led to a shift in the strategic allocation of transport investment from a strategy aimed at winning a core coalition to one focused on hegemony building. We explain such result as a government’s strategic move to ‘fill two needs with one deed’ by: (1) broadening the incumbents’ populist appeal by developing their ‘state party’ image and displaying their grand vision of ‘New Turkey’; (2) and, yet, co-opting a politically supportive elite of entrepreneurs and cronies, who benefit from the preferential award of public procurement, independently of the location of infrastructure projects.