How Will a China/Russia Lunar Station Impact the United States?

China and Russia recently issued a joint announcement that they planned to construct an International Lunar Research Station (ILRS) on the moon or in lunar orbit to carry out “multi-disciplinary and multi-objective scientific research activities." We asked several of our experts and specialists in space issues for their thoughts on this proposed collaboration.

What impact could this collaboration have on the United States, Washington's relationships with China and Russia, and on international security? 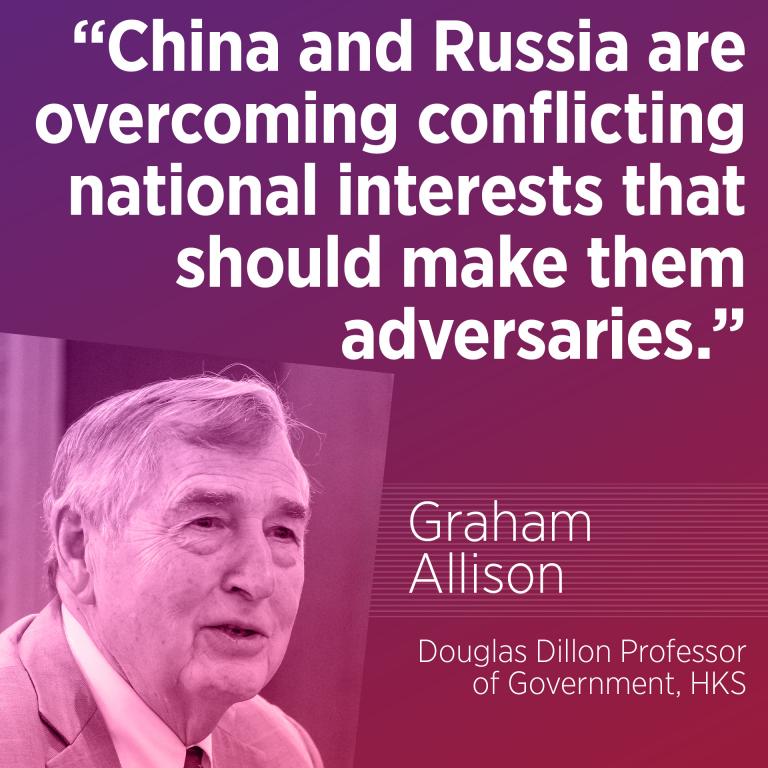 “The announcement that China and Russia will jointly construct a space station on the moon is a great leap forward in the establishmentof what Zbigniew Brzezinski aptly labeled the 'alliance of the aggrieved.'  As I argued three years ago in an article titled 'China and Russia: A Strategic Alliance in the Making,' thanks to a combination of the failures of American statecraft on the one hand, and the brilliance of Xi Jinping’s diplomacy on the other, China and Russia are overcoming conflicting national interests that should make them adversaries. And as that article predicted, this Sino-Russian alliance has become operationally more consequential than the much more frequently touted ‘strategic partnership’ between the U.S. and India.” 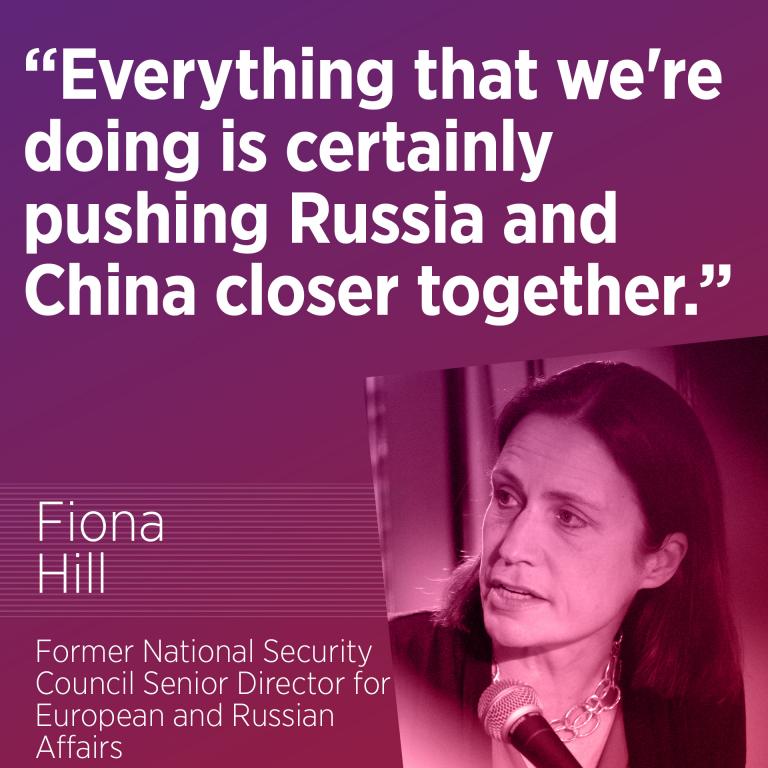 “I’m wondering if they're going to - I've been probably watching too many Hollywood movies - put up a giant set of Chinese and Russian flags with some permanent spotlight so that even with binoculars and the naked eye we would be able to see them for every full moon. It's basically just to make a point because a lot of the relationship between China and Russia is the product of shared irritation with us, and also a shared sense of threat….

For now, everything that we're doing is certainly pushing Russia and China closer together. It would be very difficult to create a wedge between them and then try to expand that. The best thing that we can do is really take the temperature down if we can on the relationship with Russia, and not keep forcing them back together. Clearly, we also don't want to be in a state of open confrontation with China.” (Excerpt from “The Problem with Russia,” Belfer Center Intelligence Project Seminar, 3/17/21) The following perspective does not represent the views of the DoD or US Space Force:

“The planned Sino-Russian lunar research base is a microcosm for larger geopolitical moves. Russia and China have different national interests but share a common goal – changing the US-led unipolar world order. Each nation recognizes they must collaborate to establish a bipolar (or, in Putin’s perspective, a multipolar) order that dethrones the US as the global hegemon.

Although a lunar base operated by American adversaries poses a long-term security challenge, this announcement likely decreases immediate risks to US space assets. A lunar base requires regular access to a debris-free space domain. Until recently, neither China nor Russia appeared worried about space debris. Commitment to this agreement points to decreased kinetic activity in orbits critical for US national security.” “America loves a race, whether it’s an Olympic race, arms race, or space race.  China and Russia’s announcement that they will construct a Lunar Research Station on the moon presents America with a challenge it likely cannot pass up: a 21st century race (back) to the moon.  It was early Russian successes in space that caused America to accelerate its own space program.  President Kennedy set the goal of landing on the moon in the 1960’s because he, and the American leadership, did not want to cede that high ground to Russia.  The lack of a challenger since then is a big reason we have not returned.  Under the Trump administration, NASA had set the goal of returning to the moon by 2024: ambitious in an environment of coronavirus and deficits.  The Biden administration probably did not have the moon on its “to do” list but, that could change.” 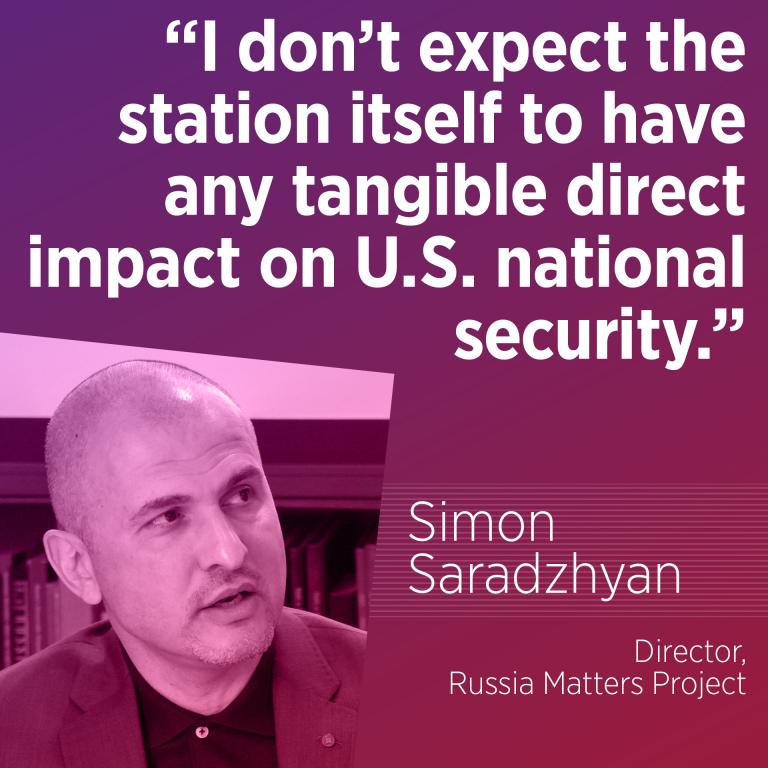 “What Roscosmos’s Dmitry Rogozin and CNSA’ Zhang Kejian signed on March 19 was a memorandum of understanding. These are typically not legally binding. If they do follow up on this with a legally-binding deal and jointly build a lunar station before Americans do so, then that could become Moscow’s and Beijing joint Sputnik moment in what would dent America’s reputation as the world’s leading technological power. It could also give both powers an advantage in what some see as an inevitable race for the Moon’s resources. Back on Earth, Sino-Russian station would also further  solidify what leaders in Moscow and Beijing have described as comprehensive partnership and strategic partnership. Since the U.S. views both Russia and China as competitors, further strengthening of partnership will not be in America’s interest.  That said, I don’t expect the station itself to have any tangible direct impact on U.S. national security in the short-to-medium.” 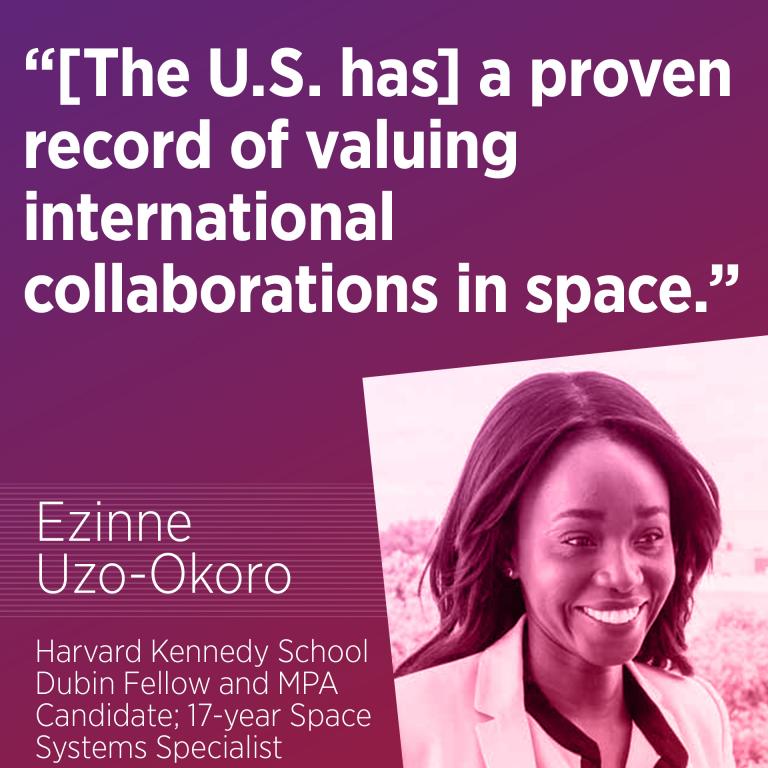 “There exists more than one way to do things and the more ways we know how to do things, the safer we all are, so it is important to be supportive of international cooperation. The U.S. has targeted scientific and exploratory priorities, which place us on a specific and different path, yet we have a proven record of valuing international collaborations in space and would be interested in their scientific discoveries.” 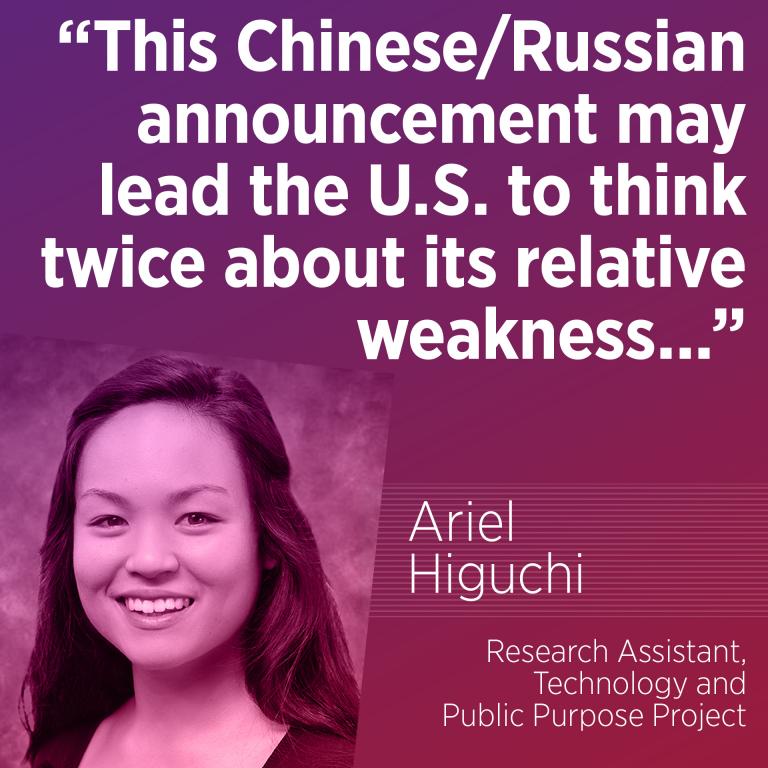 “National space agencies and private companies around the world are engaged in research to advance emerging space technologies. Amidst the backdrop of these developments is an incomplete legal framework to govern non-traditional space activity. In the absence of any rules governing outer space, during the Cold War, the U.S. and the Soviet Union negotiated the bedrock of international space law. Today, however, our actions in space are mirroring our divisions on Earth. While the U.S. charts one path alongside it’s partners via the Artemis Accords, the plans to develop a Chinese-Russian International Lunar Research Station continues a burgeoning trend of building an alternative security system. As the U.S. competes for support for the Artemis program, this Chinese/Russian announcement may lead the U.S. to think twice about its relative weakness: the lack of consistency in space policy from one administration to the next and its impact on its private space sector, allies, and partners.”

Biden's War at Home Over Afghanistan Is Just Beginning

After making the right call on withdrawal, the U.S. president better get ready for second-guessing.
More from Stephen M. Walt

John Kerry will give a fireside chat at this conference, which will examine climate change from a security perspective.
More on Environment and Climate Change