Belfer Center experts comment on repercussions of the invasion

“Europe today faces its darkest hour since the Second World War. So far Putin’s war of choice has unified the Ukrainian people, unified the transatlantic alliance, unified European defences and divided Russia from the global economic system. The most dangerous chapters of this crisis lie ahead, most of all for the brave Ukrainian people, but also for the world. Notwithstanding its welcome and newfound unity, the West must now be thinking ahead. The foundation of Russia’s power remains its energy exports. For Europe, our security and climate needs now align. An isolated and weakened Putin will be a pitiless adversary. The West must combine moral clarity, strategic resolve, and diplomatic imagination. Europe’s future is at stake, together with Ukraine’s.” 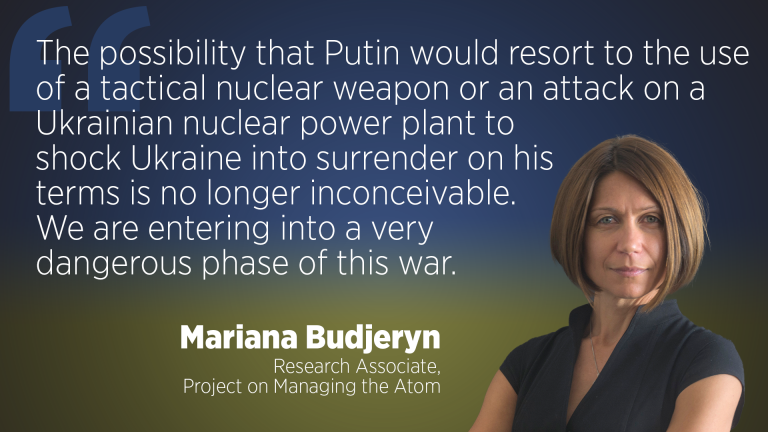 “Putin’s war against Ukraine is not going to his plan. Five days on, Ukrainian armed forces, territorial defense units, and the general population have mounted fierce resistance against the invading troops. Meanwhile, the West and most of the democratic world closed ranks with Ukraine in an unprecedented show of solidarity and support. Putin, however, cannot be seen as losing a war to Ukraine, a country he seems to deeply despise and is taking incredible risks to subdue. The danger of a bloody escalation remains high. The possibility that Putin would resort to the use of a tactical nuclear weapon or an attack on a Ukrainian nuclear power plant to shock Ukraine into surrender on his terms is no longer inconceivable. We are entering into a very dangerous phase of this war.”

“President Putin’s criminal invasion of Ukraine and reckless nuclear saber-rattling heighten global dangers, requiring a broad international response. Beyond the sanctions imposed so far, and the efforts to help Ukraine defend itself and to support the Ukrainian people, it is essential over the long term to find ways to reduce the dangers of conflict and of escalation to the use of nuclear weapons. These must start, of course, with a resolution of the current war; but beyond that, we need new risk-reduction and arms control measures for the new challenges the world faces.”

“It is essential to provide Ukraine, in real time, with all the military assistance they need to continue to resist effectively Russian aggression. More anti-aircraft Stinger missiles and anti-tank weapons are crucial. It is also important to support Ukraine diplomatically, which should include participating in any peace talks between Russia and Ukraine. In addition to ratcheting up the economic sanctions regime, the U.S. should increase, to the maximum extent possible, its oil and gas production. This approach would both help neutralize Russia’s use of energy as a weapon and tamper down price increases in the energy markets. We should also respond to Putin’s nuclear saber-rattling by pointing out that it is both reckless and foolhardy.” 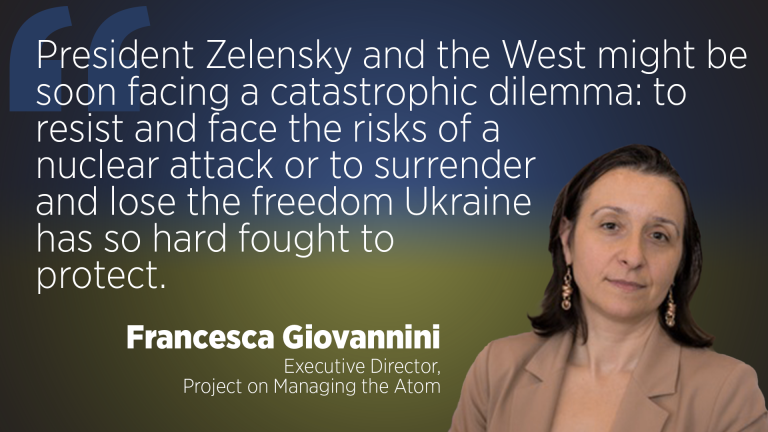 “Russia’s use of tactical nuclear weapons in Ukraine is no longer an implausible scenario. The military stalemate enduring between a much bigger yet underperforming Russian military and a smaller but persistent and well-trained Ukraine might soon force Putin to escalate further, including to cross the nuclear threshold. While Russia's use of tactical nuclear weapons in Ukraine has no specific military utility, its political messaging value is undisputable.

The use of one or more tactical nuclear weapons would be an unmissable attempt of Putin to break the unity of the west and test several NATO countries' resolve. It would also signal once and for all his willingness to do whatever it takes to achieve his political and strategic goals.

President Zelensky and the West might be soon facing a catastrophic dilemma: to resist and face the risks of a nuclear attack or to surrender and lose the freedom Ukraine has so hard fought to protect. This is an existential dilemma without a perfect solution, one that nobody should ever face.” —This is an excerpt from commentary in Bulletin of the Atomic Scientists.

Parties should be concentrating like a laser on identifying a way out of this conflict that all sides can live with. However unpalatable compromise may be, the alternative—further escalation—would be far worse. Putin’s decision to place Russia’s nuclear forces on alert means we’re now in a nuclear crisis, materially raising risks of both intentional and inadvertent escalation. Short of that, even conventional escalation, including the real possibility of drawn-out and grinding urban warfare, promises much higher death tolls than so far seen and a further spike in already sizable refugee outflows. And, in this same vein, a further escalation of ongoing migration weaponization, whether to achieve military and/or political objectives, could turn what is already a tragedy into a multi-front humanitarian disaster.

“The USSR collapsed with a whimper in 1991, victim of its own failings. But what we thought was a peaceful transition wasn’t. In the decades since, we have witnessed two violent coup attempts in Moscow, popular revolts in Georgia, Kyrgyzstan, Belarus, and Ukraine, two wars in Chechnya, and wars in Georgia, Crimea, Donbass and across the breadth of Ukraine. This violence is legacy of the unexploded ordinance left by the USSR, now uncovered and repurposed by Putin. In trying to fuse Ukraine back to Russia with pressure and force, Putin is doing what Gorbachev wouldn’t. If successful, he won’t stop there.

Ukraine’s leadership, army, and citizens have proven themselves inspiringly brave, resilient, and capable. While Russia can win battles, it will lose the war as long as the citizens keep resisting and making Ukraine unoccupiable. They have shown the will; let’s make sure they have the means.” 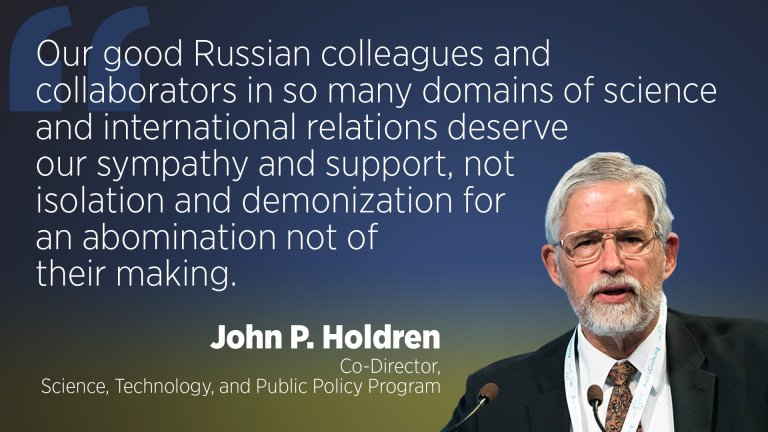 “Our hearts go out to the Ukrainian people in this time of trial and suffering.  But we should also not forget that the Russian people didn’t vote for this, and many don’t support it.  Our good Russian colleagues and collaborators in so many domains of science and international relations deserve our sympathy and support, not isolation and demonization for an abomination not of their making.”

“Russia is a major exporter of oil and natural gas. The two fuels provide more than 40% of the total revenue to Russia's budget. Sustained sanctions on energy will have a major impact on Russia but will also impact gasoline prices this summer and natural gas prices next fall.  Interestingly, the market may have already discounted for such sanctions—since crude oil prices have passed the $100 mark and European gas prices have skyrocketed to levels seven times those in the US. One of the biggest questions in the next few weeks will be whether the EU and the U.S. will be willing to pull the trigger and cut off purchases of Russian oil and natural gas, which may push these prices still higher.”

“A lesson that should be learned from the present crisis is that it is deadly madness to maintain weapons that could obliterate civilization. There are practical ways to verify nuclear disarmament. It is the psychological, financial, political momentum of the nuclear arms race that allows the complacency that keeps it going.” 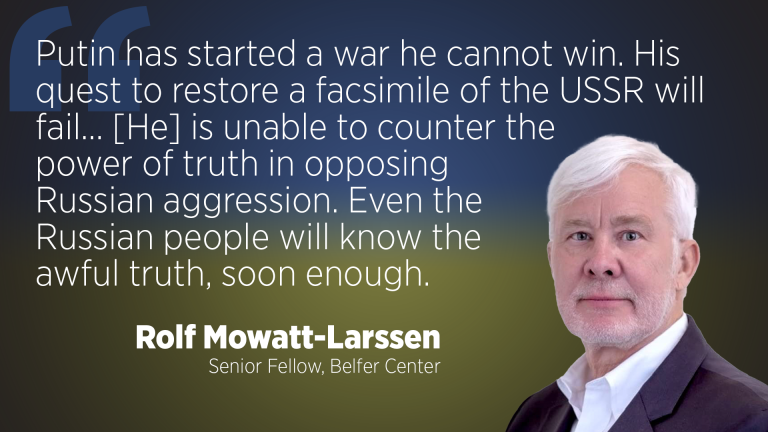 “Putin has started a war he cannot win. His quest to restore a facsimile of the USSR will fail. Putin’s decision-making is fraught with miscalculation: he overestimated the desire among Ukrainians to rejoin Russia; underestimated their yearning for freedom; failed to grasp the extent to which NATO and the world would unify against him; and most of all, is unable to counter the power of truth in opposing Russian aggression. Even the Russian people will know the awful truth, soon enough.”

“Ukraine’s resistance to Russia’s illegal invasion is awe-inspiring, as is the moral and material support they are receiving from other countries. It is still early days, however: the U.S. and its allies should neither succumb to premature triumphalism nor assume that this crisis is an opportunity to humiliate Russia further or get Putin removed from power.  We are dealing with a nuclear-armed adversary whose vital interests are engaged.  To save Ukraine and avoid an even more dangerous situation, finding a way for Russia to save face and withdraw is the wiser course.” 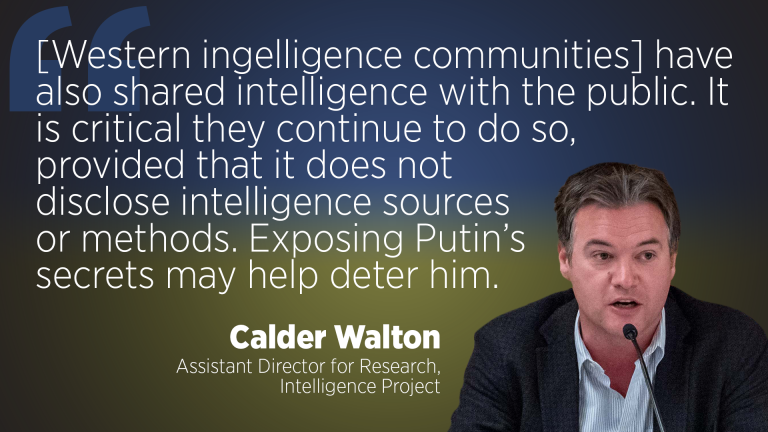 “One of my principal concerns right now is that Putin has placed Russia’s nuclear forces on special alert. As the conflict thus escalates to war potentially involving nuclear weapons, it will be critical for Western intelligence communities to continue providing decision makers with timely, accurate, and relevant, assessments about Putin’s intentions. The U.S. and British intelligence communities have hitherto been successful doing so. They have also shared intelligence with the public. It is critical they continue to do so, provided that it does not disclose intelligence sources or methods. Exposing Putin’s secrets may help deter him.

The late Nobel Laureate, Holocaust survivor, and human rights activist, Elie Wiesel, predicted that the major challenge of the twenty-first century would be the same as the twentieth: ‘How to deal with fanaticism armed with power.’ With Putin’s fanatical attack on Ukraine, Weisel’s predictions have been proved sadly correct.”