This paper argues that the impact of the eight-year war in Syria will reverberate across the region for years to come, and explores, in particular, four noteworthy legacies. First, it examines the series of interventions in Syria by regional and foreign powers (including Russia, Turkey, Iran, the United States, Saudi Arabia and the United Arab Emirates) that reconfigured the role of such powers across the region. Second, it reveals the emergence of two opposing alliances in the region, each comprising Arab states, regional Arab and non-Arab powers, global powers and local nonstate actors. These or similar alliances may well reappear in other Middle Eastern conflicts. Third, it analyses the striking number and variety of foreign forces that either directly fought in Syria or indirectly supported warring factions. 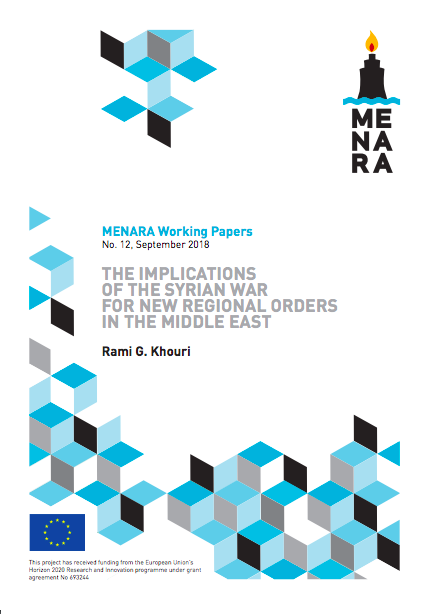 Since 2012, these forces have included at least twenty states and major non-state players, alongside hundreds of smaller tribal, Islamist and secular rebel and pro-Assad groups. Finally, the paper suggests that the international community’s weak response to the untold war crimes on both sides, and its apparent de facto acceptance of Syrian President Bashar al-Assad’s incumbency, portend continuing regional authoritarian and violent political systems for the foreseeable future.

It is not surprising that the land of Syria, which was a pivotal international and regional battleground a century ago both during and after the First World War I, today is again a regional and international battleground: literally a field of active military battles among a much wider range of warring parties. As political and military leaders from Alexander the Great and Napoleon to King Faisal up through to Vladimir Putin have all understood, this reflects Syria’s historical geopolitical position as a strategic pivot around which regional and international powers have routinely competed for influence or hegemonic control of the Levant region and wider Western Asia. The defeat of the Ottoman Empire in the First World War and the assertion of British and French colonial control in the Levant gave Syria new strategic relevance a century ago, which it has maintained until today, occasionally adjusting its alliances and priorities as regional geostrategic and military conditions required (Barnes-Dacey and Levy 2013).

Syria’s history in its modern Middle Eastern setting reflects a pendulum-like legacy, in which Syria and the Middle East in turn shape and reshape each other within the context of international interventions. For instance, on the one hand, Western colonial interests and regional power intrigue in the Middle East shaped Syria a century ago and carved out its modern borders. On the other hand, during the postcolonial period, Syrian sovereign policies reshaped regional relations for half a century, until regional and foreign forces quickly exploited the indigenous non-violent Syrian uprising that challenged the state starting in early 2011. Syria was then reshaped by these dynamics, particularly when these forces physically entered the picture militarily and politically to generate all-out war and the fracturing of the Syrian state.

The main focus of this paper, then, is to analyse how, in particular, events in Syria during 2011–18 have helped shape new regional dynamics and orders in the Middle East. The consequences of the seven-year-long Syrian war will now become clearer and are likely to have an impact in different ways across the region for years to come. Syria represents one of the sharpest recent examples of the interplay among local, regional and international powers whose strategic interests are constantly evolving. Syria has been at the receiving end of those dynamics since 2011, and in the imminent post-war period, the legacy and lessons of what occurred in Syria will once again reshape other parts of the Middle East.

The paper will contextualize and frame the Syrian war’s main developments that, as of today, appear likely to persist, to influence geopolitical and strategic developments in the Middle East, and to reconfigure the prevailing order, its power structures and its main actors. Such evolutions can only be fully understood in the wider recent context of the cumulative impact of four successive moments of transformation: (1) the end of the Cold War around 1990; (2) the US-led invasion of Iraq in 2003; (3) the 2011 uprising against the Bashar al-Assad government that ultimately transformed into the 2011–18 war; and (4) the post-war period that started to materialize in mid2018. This latest era of geostrategic transformation in Syria and the region – like the past seventy years – reflects interactions among many combinations of local, regional and global actors. If the key actors and interests that drove the events of the 2011–18 war are clear, it is impossible to say definitively which forces will persist, which ones might fade away or what combination of local states, foreign powers and non-state actors (NSAs) might shape the future regional orders that materialize.

For more information on this publication: Belfer Communications Office
For Academic Citation: Khouri, Rami. “The Implications of the Syrian War For New Regional Orders .” Paper, September 12, 2018.