An aerial view of the main entrance to the Cite Soleil area of Port-au-Prince, Haiti, Tuesday, Dec. 11, 2018. 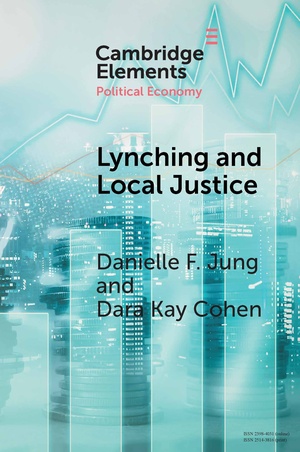 In many areas of the world, justice is administered not in courtrooms by agents of the state, but rather by ad hoc groups of community members seeking to punish criminals and others who have offended local standards. Relatively minor crimes are brutally penalized: beating, stoning, burning, and even decapitation are reported in some contexts.

In Lynching and Local Justice: Legitimacy and Accountability in Weak States, Danielle F. Jung and Dara Kay Cohen argue that lynching emerges when neither the state nor its challengers have a monopoly over legitimate authority. When authority is contested or ambiguous, mass punishment for transgressions can emerge that is public, brutal, and requires broad participation.

Using original cross-national data, Jung and Cohen demonstrate that lynching and other types of collective vigilantism have been persistent problems in dozens of countries over the past four decades. “The frequency and widespread acceptance of lynching in the modern world is both horrific and puzzling,” Jung and Cohen write.

In addition to the cross-national data, the authors draw on original survey and interview data from Haiti and South Africa to show that public perceptions of a government’s legitimacy are tied to which actors hold power, and in turn how lynching emerges and becomes accepted. Support for lynching typically occurs when at least one of three conditions is present: when states fail to provide governance, when nonstate actors provide social services, or when community members must rely on self-help.

Several aspects of lynching make its emergence and persistence particularly costly for the communities that engage in it, Jung and Cohen write. They note that the speed with which incidents occur removes the opportunity for prior investigation, potentially resulting in the wrong person being punished or killed; the possibility that lynching is linked to other negative social outcomes; and the disproportionality of the punishment relative to the crime. “When lynching becomes accepted, this can be a sign that the community has determined the benefits of lynching outweigh the costs, entrenching a system of justice that is outside the scope of the law and the state,” the authors write.

“Rare is the book that by the end of it, you have changed your perception as well as understanding of the relevant phenomenon. Lynching and Local Justice by Danielle Jung and Dara Kay Cohen is such a book. I thought of lynching as the act of largely apolitical mobs running through the countryside very much distinct from the larger political projects taking place throughout the relevant territorial unit. Exploring varying relations between governments, behavioral challengers and citizens through a cross-national investigation as well as a deeper-dive into Haiti, Jung and Cohen significantly enhance our knowledge of the complex interaction between governance, resistance, socio-political order as well as disorder and citizen self-protection. One of the most profound insights of the book is the somewhat complex trap that ordinary citizens find themselves in where they are either left relatively docile and dependent on successful violence-wielding political actors or they are forced to fend for themselves in a violent war of some against some.” – Christian Davenport, Professor of Political Science, University of Michigan

“This exciting new work by Jung and Cohen significantly advances our understanding of lynching and collective vigilantism. By combining cross-national data collection, in-depth fieldwork, and novel theoretical insights, Jung and Cohen have made an important contribution. The book is also noteworthy for its careful attention to the ethical quandaries that arise when conducting research in murky, complex, potentially violent settings.” – Regina Bateson, Visiting Professor, University of Ottawa

“Lynching and Local Justice persuasively shows that far from being restricted to spaces where the state is absent, lynching is instead linked to the politics of authority and legitimacy among states and armed non-state actors. Jung and Cohen combine analysis of both subnational and cross-national data on lynching with careful theorizing grounded in classic studies of the state, institutions and collective action. This innovative book brings lynching and, more broadly, vigilantism into the center of political science.” – Eduardo Moncada, Assistant Professor of Political Science, Barnard College, Columbia University

“This book makes an important contribution to our understanding of extralegal violence, marshaling novel cross-national data on lynchings, as well as survey and qualitative data from Haiti and South Africa. It will be essential reading for anyone interested in how patterns of governance and violence interact, both at the macro- and micro-levels.” – Michael Weintraub, Associate Professor, Universidad de los Andes

Since technoscientific research aims to find new questions and new answers, we must shift from funding projects to funding people, writes Venky Narayanamurti.

In recognition of Data Privacy Day, the Cyber Project joins the R Street Institute in an event to discuss and debate what a data security and data privacy law should contain.