A Model of Praetorian States 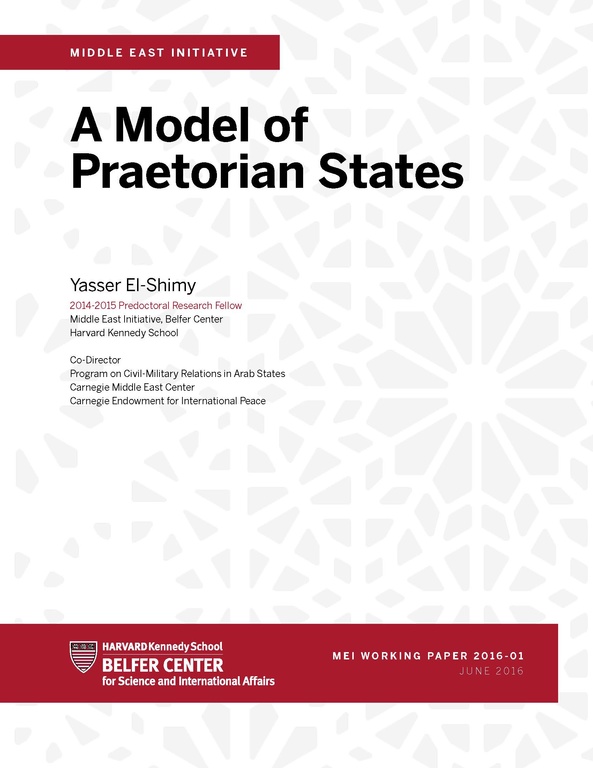 As discussed in the last chapter, this dissertation has identified praetorian armies as being a unique political actor positioned to shape and determine the outcomes of a transition. The literature on the breakdown of democratic transitions, generally, and that of Egypt, particularly, should not overlook the single most powerful entity in many of these cases: the military. While chapter 1 shed light on how much of the ‘Arab Spring’ scholarship emphasizes procedural, ideological and systemic/structural factors, this chapter offers an alternative explanation. A praetorian army, as found in the Egyptian case, is not a mere bystander, nor a neutral observer to the momentous political changes materializing in the country. Conversely, it is by far the most consequential actor in the political arena both influencing and responding to events, such as the January 25th uprising, the parliamentary elections of 2011-2012, as well as the rise (and subsequent fall) of the Muslim Brotherhood. For our purposes, we will adopt, for now, a succinct definition of praetorianism: Praetorianism is a political system where civilians serve in government at the pleasure (and by permission) of the army.

The Egyptian Armed Forces (hereafter: EAF), not unlike any other praetorian army, have clearly defined interests, prerogatives and objectives, which they seek to defend either by manipulating a given political arrangement, the so-called “ruling but not governing formula” (Cook 2007), or by taking over power themselves. While it is generally costly to opt for the latter (due to potentially prohibitive political costs of assuming the spotlight), a praetorian army
would feel compelled to incur such costs, if the praetorian system itself were threatened by the unchecked rise of a dominant civilian party. In fact, all militaries in countries going through
transitions are especially antithetical to attempts of imposing ‘subjective civilian control.’ That is to say the military will resort to all means to forestall a systemic shift in the balance of power
within the political system towards civilians. Civilian control must be avoided at all costs. To put things in a wider regional perspective, Egypt’s army is praetorian; Tunisia’s is not. This substantive difference in the nature of both countries’ militaries has determined the varying
outcomes in both transitions.

The main questions then become why a praetorian military allows civilians to govern at all, and why, to borrow Huntington’s (1957, 83) terms, it fears subjective civilian control (the dominance of a single party) more than objective civilian control (the institution of systemic and constitutional checks on the army’s influence). Even more intriguing is the question of why a military abandons the seemingly more advantageous position of pulling the political strings from behind the curtains to taking the spotlight. Would it not be in the EAF’s interest to establish an unambiguous military dictatorship? In a span of one year, it appears as if Cairo had oscillated wildly between the nadir of military rule (with the unprecedented free election of Mohamed Morsi, a civilian) and its zenith (with the latter’s forceful ouster by the military). This cannot be simply attributed to a change of fortunes, but rather to the shifting roles a praetorian military assumes based on the prevailing circumstances. To put it differently, the EAF is flexible enough to assume different roles based on shifting structural opportunities and risks. To probe the events in Egypt further, we should first investigate the notion of praetorianism itself, and whether it can be applied to the case at hand.

This chapter will begin by highlighting how the various types of civilian-based authoritarian systems of government do not exactly apply to the Egyptian case. It will then discuss how the literature has either affirmed or dismissed the centrality of militaries in undermining political institutions and transitions. The second chapter also proposes a more precise definition of praetorianism (than has thus far been offered in the pertinent literature), and contends that a praetorian army, as a chief political actor, will seek to manage, subvert and wholly control political transitions to ensure civilians do not actually rule. Finally, it will suggest a typology of civil-military relations under different regime types, including praetorianism, and argue that subjective civilian control is likely to fail during a transition in a praetorian state.

Defining praetorianism requires a brief elaboration on the different types of authoritarian systems, and why a praetorian state is not to be confused with, say, a military dictatorship. This chapter would, furthermore, detail and explain the three different types of praetorian armies (ruler, guardian and moderator). Following that will be a discussion on why praetorianism, as a theoretical framework, matters in this and other similar cases. Finally, the chapter concludes with the broader debate on civil-military relations, and delineates that body of work’s relevance to the praetorian model of government. All these arguments should bolster our contentions that a) militaries matter to political transitions; b) praetorian armies are qualitatively different from other armies; and c) praetorian states are considerably less likely to undergo a successful democratic transition, let alone democratic consolidation.