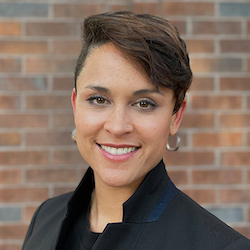 “It gives me great joy to welcome Natalie to the Belfer Center,” said Carter. “She personifies our mission to advance policy-relevant knowledge and train tomorrow’s leaders.”

“Natalie has served with distinction in mission-critical settings across the CIA,” said Rosenbach. “We’re excited to welcome this proven team-builder and brilliant strategist to help guide the Center’s next chapter.”

Colbert served in the CIA for 13 years in analytic and management roles. She’s tracked fast-paced issues for senior policymakers, including the President, covering the Middle East and conflict zones in Africa and Latin America. Across her career, Colbert has earned multiple awards for leadership excellence. In 2021, she received the Near East Mission Center Award for Excellence in Diversity, Equity, and Inclusion.

Colbert graduated in 2006 from New York University, where she majored in International Relations and Francophone Studies. She earned her M.P.P. from Harvard Kennedy School in 2008, and continues a proud tradition of HKS alumni returning to serve at the Belfer Center.

“I am thrilled to be returning to HKS,” said Colbert. “The Belfer Center is a leading hub for research, initiatives, and leaders that shape policy and debate across a range of the world’s most pressing issues, and I look forward to working with this dynamic community of students, staff, faculty, and fellows.”

The U.S. cannot prevail in its strategic competition with China unless it opens its markets fully to the rest of Asia, Europe, and beyond.
More from Kevin Rudd

The Cyber Project’s Camille Stewart and Lauren Zabierek talk about launching the #ShareTheMicInCyber campaign in mid-2020.
More on Cyber Security

While some countries will seek control and surveillance, others will champion privacy, openness, and diversity in the currencies offered.
More on Economics