Cambridge, Massachusetts – The Future of Diplomacy Project at Harvard Kennedy School’s Belfer Center for Science and International Affairs has named four senior leaders in diplomacy to be Fisher Family Fellows for the 2020-21 academic year: Julie Bishop, former Minister of Foreign Affairs of Australia and Deputy Leader of the Liberal Party; Saeb Erakat, the Chief Palestinian Negotiator and Head of the Negotiations Affairs Department of the Palestine Liberation Organization (PLO); Federica Mogherini, former High Representative of the European Union for Foreign Affairs and Security Policy and Vice-President of the European Commission; and Peter Wittig, former Ambassador of the Federal Republic of Germany to the United States.

“We are proud to welcome these four respected global leaders to the Harvard Kennedy School for this academic year. They will strengthen our capacity to learn the lessons of effective diplomacy and statecraft,” said Faculty Chair Nicholas Burns.

The Fellows will speak in virtual seminars in the autumn, hold office hours with students to help foster their professional development and networks, and participate in research initiatives. Public health conditions permitting, the Fellows will visit campus in spring 2021 to lead study groups for Harvard students on topics of their expertise, including on transatlantic relations; the Israeli-Palestinian conflict; and emerging foreign policy and security challenges in the Indo-Pacific region. 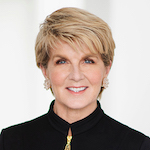 Julie Bishop is currently the Chancellor of the Australian National University. As Foreign Minister, she strengthened Australia’s strategic and economic relationships and positioned Australia as the largest aid donor to Indo-Pacific region. She also defined gender equality and women’s empowerment strategy as a core priority in Australia’s foreign policy and lead the international response to the downing of Malaysian Airlines flight MH17. Over the course of her career in government, she served as Minister for Ageing, Minister for Education and Science, Minister for Women, and as a Member of Parliament. She was the first woman to be Foreign Minister. 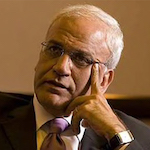 Saeb Erakat has been extensively involved in all negotiations with Israel, including those conducted at Camp David (2000) and in Taba (2001). In 1991, he was the Vice-Chair of the Madrid Peace Delegation and was later the Vice-Chair at the Washington negotiations of 1992. Previously, he served as the Minister of Local Government for the Palestinian National Authority and is also Head of the Palestinian Side of the Steering and Monitoring Committee. He is the author of fourteen books on foreign policy, oil, conflict resolution, and negotiations. 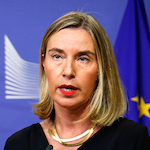 Federica Mogherini served as the High Representative/Vice-President of the European Commission from 2014-2019 where she was Europe’s top diplomat, responsible for coordinating foreign policy among 28 countries. During her tenure, she was instrumental in forging the Joint Comprehensive Plan of Action with Iran and launched the EU’s Global Strategy for Foreign and Security Policy. Previously, Mogherini served as Minister of Foreign Affairs of Italy and Head of the Italian Delegation to the NATO Parliamentary Assembly. As of September 2020, she will be Rector of the College of Europe. 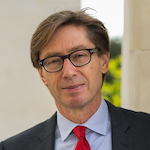 Peter Wittig brings nearly forty years’ experience in the German Foreign Service to his fellowship. In addition to serving as Ambassador of Germany to the U.S., Wittig has also served as Ambassador to the United Kingdom and as Ambassador to the United Nations in New York during Germany’s tenure as a member of the UN Security Council in 2011 and 2012. Before starting his career in the Foreign Service, Wittig studied history, political science and law at Bonn, Freiburg, Canterbury and Oxford universities, and he taught as an assistant professor at the University of Freiburg.

The Fellows’ work at Harvard Kennedy School is made possible through The Richard and Nancy Fisher Family Fellows Program, created by Nancy and Richard W. Fisher, AB ’71, long-time supporters of Harvard University’s international engagement and teaching. The fellowship was created in 2010. It brings leading practitioners and thinkers to Harvard to consider the evolving discipline of diplomacy in the context of 21st century challenges.