Unions of Brokers of Transition from Authoritarian Rule: Insights from Tunisia 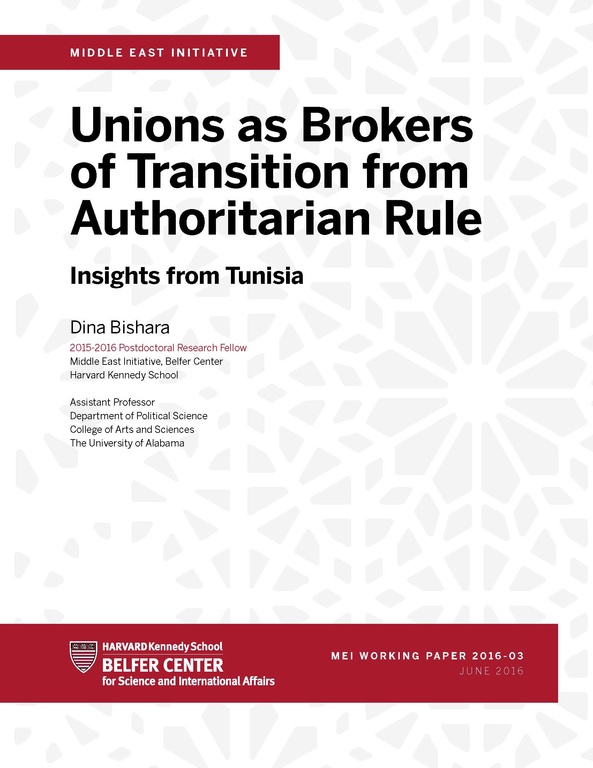 In October 2015, the Tunisian National Dialogue Quartet was awarded the Nobel Peace Prize for its contribution to peaceful democracy-building following the mass protests that led to the ouster of President Ben Ali in 2011. The Quartet comprised four key players in Tunisian civil society, including the Tunisian General Labor Union (UGTT), the Tunisian Confederation of Industry, Trade and Handicrafts (UTICA), the Tunisian Human Rights League (LTDH), and the Tunisian Order of Lawyers. The UGTT was, by far, the most prominent player in the Quartet. Posturing as a power broker, the union mediated conflict between competing political parties at a critical juncture in the country’s transition. This high-profile role goes beyond a conventional unionist role, where unions’ behavior is confined to the protection of members’ interests. In this sense, the UGTT moved beyond “the particular and particularized grievances that are the raison d’etre of the organization and engage in political actions, especially those that have little or nothing to do with members’ reasons for belonging” (Ahlquist and Levi 2013).

The UGTT’s highly political intervention in Tunisia’s transition motivates the central theoretical question of this paper: When do trade unions emerge as major political actors or adopt an agenda that transcends their members’ material interests? Given their typically large and stable membership, trade unions often have strong organizational capacities and the potential, in some cases, to emerge as platforms for political mobilization. This makes it particularly important to understand the conditions under which trade unions shift between unionist and political agendas. Existing explanations—focusing on the degree of trade union autonomy from the state, labor’s material incentives to support democratization, and the labor movement’s relationship to elite actors in the transition—do not sufficiently account for the UGTT’s high-profile political role in Tunisia’s transition, as well as the fact that the organization has sometimes prioritized its political role over its members’ material interests.

Using a historical analysis of the evolution and trajectory of the UGTT, I argue that the context in which trade union organizations emerge and whether their formation precedes the establishment of a post-independence regime has important long-term implications for the type of union activism in a given country. If trade union organizations have a strong presence at the time of regime formation, and if their institutional identity is tied to broader struggles (perhaps the struggle for national independence), these unions are more likely to have an expansive view of unionism. Given authoritarian attempts to co-opt trade union leaders, however, it is through rank-and-file militancy that the legacy of a broader vision of unionism is sustained. This is a different kind of dynamic than that described by John Ahlquist, and Margaret Levi where leaders play a central role in convincing members of endorsing issues that go beyond their narrow material interests (2013).

In Tunisia, the UGTT was formed ten years prior to independence and its formative years were defined by its critical role in the struggle against colonialism. This meant that the UGTT entered the post-independence period as an organization with strong nationalist credentials. The UGTT’s legacy as a nationalist actor remained an inspiration for many of its members despite sustained attempts to co-opt the UGTT’s leadership under the Bourguiba and Ben Ali regimes. This legacy was sustained over time through rank-and-file militancy, which pressured the leadership at key contentious moments in the history of the organization. Rank-and-file mobilization during these periods was a key factor in pushing the otherwise complacent UGTT leadership into asserting a more oppositional stance toward the regime during the 2010/2011 uprising. Given the UGTT’s unstable relationship with the regime, union leaders eventually succumbed to rank-and-file pressure. This vision of trade unionism also informs the UGTT’s behavior in the post-Ben Ali period.

There is an element of path-dependence to the argument made here. Following Pierson and Levi, I adopt a narrow conception of path-dependence in the sense that “once a country or region has started down a track, the costs of reversal are very high. There will be other choice points, but the entrenchments of certain institutional arrangements obstruct an easy reversal of the initial choice” (Levi 1997, 28). This logic implies that once a particular type of unionism emerges in a given context, it will be difficult to change the character of those unions.