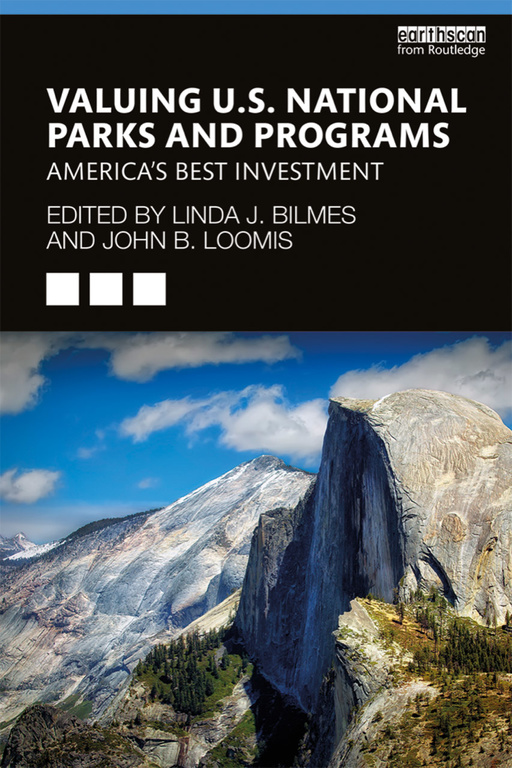 Editors Linda Bilmes and John B. Loomis develop a comprehensive framework to calculate the economic value of protected areas, with particular application to the U.S. National Park Service. The framework covers many benefits provided by NPS units and programs, including on-site visitation, carbon sequestration, and intellectual property such as in education curricula and filming of movies/ TV shows, with case studies of each included. Examples are drawn from studies in Santa Monica Mountains National Recreation Area, Golden Gate National Recreation Area, Everglades National Park, and Chesapeake Bay. The editors conclude with a chapter on innovative approaches for sustainable funding of the NPS in its second century. The framework serves as a blueprint of methodologies for conservationists, government agencies, land trusts, economists, and others to value public lands, historical sites, and related programs, such as education. The methodologies are relevant to local and state parks, wildlife refuges, and protected areas in developed and developing countries as well as to national parks around the world.

Containing a series of unique case studies, this book will be of great interest to professionals and students in environmental economics, land management, and nature conservation, as well as the more general reader interested in National Parks.

"There are many reasons to preserve our national parks: beauty, biodiversity, recreation, history, and patriotic pride. But an old adage says that whoever makes the economic argument first wins. Linda Bilmes and John Loomis give us one more reason national parks must be preserved, their extraordinary economic value." — Jonathan Jarvis, Director National Park Service 2009-2017

"Linda Bilmes, John Loomis and their collaborators have calculated a value of the priceless – our nation’s natural, historic and cultural treasures cared for by the National Park Service. Their work makes an important case for supporting these irreplaceable assets not just for today, but to inspire generations to come." — Sally Jewell, U.S. Secretary of the Interior, 2013-2017

" In this new volume, Linda Bilmes, John Loomis, and their co-authors offer a comprehensive picture of the value of U.S. National Parks, and thereby provide a compelling justification for sustainable funding for their preservation in perpetuity." — Robert N. Stavins, A.J. Meyer Professor of Energy and Economic Development, Harvard Kennedy School, Cambridge, Massachusetts, USA

"We live at a time when our most treasured conservation and wildlife resources are under relentless attack. We owe a debt of gratitude to Linda Bilmes and John Loomis, for their pioneering book that validates the real economic value and growth created by our National Parks. Every person who values these treasures needs to read this important mandate for change." — Tony Knowles, Governor of Alaska (1994-2002), Chair of the National Park System Advisory Board (2010-2018)

"Linda Bilmes and John Loomis provide an analysis of what millions of American park visitors know in their hearts: Our parks are a national treasure deserving strong public support." — Philip Sharp, Member of Congress (1975-1995); President, Resources for the Future (2005-2015)

"This book describes the many ways that U.S. National Parks provide value. It explains these values in understandable economic terms and gives intriguing examples of how they actually benefit people, whether they visit National Parks or not. A must-read for anyone interested in sustainable support for these national treasures!" — Bruce Peacock, Chief Economist, US National Park Service 1998-2018

"Linda Bilmes and John Loomis brilliantly sum up the inherent value of America’s National Parks - they are our best idea AND our best investment. This book explains why fully funding our National Parks is smart policy: it generates a huge and quantifiable return on investment, nurtures our spiritual prosperity, and will pay dividends indefinitely for future generations." —Monica Medina, Principal Deputy Undersecretary of Commerce for Oceans and Atmosphere (NOAA) (2009-2013); Adjunct Professor in Science, Technology and International Affairs, Georgetown University, USA

"It turns out that ‘America’s Best Idea’ is also one of its best investments. The cost of our National Parks is repaid again and again by tourism, clean water, carbon sequestration and other benefits. The methodology used in this book will help policy makers, government agencies and land conservation groups to make the economic case for protecting our natural heritage." — Rand Wentworth, President Emeritus, Land Trust Alliance

Through annotations to a statement from Russia’s ambassador to the UN, Matthew Bunn debunks the Russians’ claim that Ukraine is planning to use a “dirty bomb” and blame Russia.

Fran Ulmer joined Sen. Angus King in a discussion of the implications of a warming Arctic, including impacts on shipping routes and trade, and expanded competition with Russia and China.

A Civil Resistance Expert on the Protests in China and Iran

In an NPR podcast, Erica Chenoweth says nonviolent protests are generally more successful than violent ones because they are likely to attract more people from all walks of life.