Arctic Resilience Forum: Working Together in the Arctic - Respecting Indigenous Engagement, Equity and Sustainability of Knowledge Systems to Support Resilience in the Arctic

Our final session of the Fall series on December 16th will focus on the topic of Working Together in the Arctic. This Talking Circle session will bring together a diverse panel of Indigenous knowledge holders and western scholars and will focus on discussing the engagement of Indigenous knowledge systems to promote resilience in the Arctic and practical ways, in which such co-production could be successful. 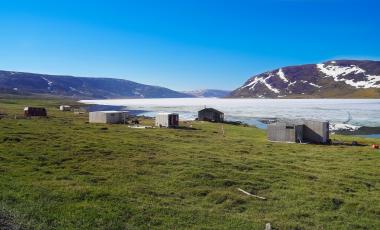 Arctic Indigenous Peoples have sustained their cultures and livelihoods for millennia, while being stewards of local ecosystems. Thus, resilience in the Arctic should be understood and implemented in the context of Indigenous knowledge and through collaboration between Indigenous knowledge systems and western science.

Indigenous knowledge has the potential to provides a foundation for individual and collective resilience of past, present, and future generations of Arctic Indigenous Peoples, and empowers communities to make self-determined choices and define their own paths to sustainable development. To foster resilience in Arctic social-ecological systems we must attain equity and sustainability of the Indigenous knowledge systems as they engage with western science and policy. This could be achieved through a collaborative process based on mutual trust, respect and deep decolonization that can guide knowledge co-production.

This journey starts with respecting Indigenous Knowledge systems and holders, followed by equitable investment in these knowledge systems that would lead to true co-production that will result in co-produced policy solutions for resilience, sustainability and thrivability of Arctic social-ecological systems.

Andrey Petrov: Dr. Andrey Petrov: Dr. Petrov is President of the International Arctic Social Sciences Association (IASSA) and Chair of the Social and Human Sciences Working Group of the International Arctic Science Committee (IASC). He is Associate Professor of Geography, ARCTICenter Director and Academic Director of GeoTREE Center at the University of Northern Iowa. Petrov is an economic and social geographer who specializes in Arctic social and economic systems, regional development, with an emphasis on the social geography of Indigenous populations. His current research concerns sustainable development, spatial organization, and restructuring of peripheral economies, as well as dynamics of social-ecological systems. Dr. Petrov leads the Research Coordination Networks in Arctic Sustainability (Arctic-FROST) and Arctic Coastal Resilience (Arctic-COAST). He has published on issues pertaining to socio-economic crisis, development, and demographic dynamics of Arctic populations.

Collen Strawhacker: Dr. Colleen Strawhacker is a Program Director in the Arctic Sciences Section in the Office of Polar Programs at the National Science Foundation. Dr. Strawhacker earned her PhD in Anthropology from Arizona State University in 2013, where she focused on the archaeology of climate-driven risk and vulnerability to food security in the U.S. Southwest and the North Atlantic. More recently, she has focused on developing projects to support cyberinfrastructure for convergent data-driven approaches to understanding climate change, including ethnical governance of Indigenous data.

Evon Peter: Evon Peter is Neetsaii Gwich’in and Koyukon from Vashraii K’oo (Arctic Village), Alaska, where he previously served as tribal Chief. In addition to his service on the GCI Board, he serves as vice chancellor for rural, community and Native education at the University of Alaska Fairbanks. Evon manages six community campuses and sixty workforce development, bridging, academic, and student services programs that serve 160 communities across Alaska. These include programs at the certificate to doctoral level in Indigenous Studies and research. His personal work has focused on incorporating Indigenous knowledge and practices into healing, leadership development, and most recently Alaska Native language programs. He holds a baccalaureate degree in Alaska Native studies and a masters degree in rural development.

Gunn-Britt Retter: Ms Gunn-Britt Retter lives in the coastal Saami community Unjárga-Nesseby in north-eastern Norway. She is a teacher of training from Sámi University of Applied Sciences and holds MA in Bilingual studies from University of Wales. Since 2001, Retter has worked with Arctic Environmental issues, first at Arctic Council Indigenous Peoples’ Secretariat (IPS) (Denmark) and since 2005 in the present position as Head of Arctic and Environmental Unit of the Saami Council. In this position, Retter has been involved in issues related to indigenous peoples and knowledge associated with climate change, biodiversity, language, pollution and management of natural resources.

Julie Raymond-Yakoubian: Julie Raymond-Yakoubian is the Social Science Program Director for Kawerak, Inc. Kawerak is located in Nome, AK and is the Alaska Native non-profit Tribal consortium for the 20 federally recognized Tribes of the Bering Strait region of Alaska. Julie has been living and working in Alaska for over 20 years, and working in the Bering Strait region for over 12 years. Her work is currently focused on collaborations with Tribes on topics such as the connections between subsistence and identity, the cultural importance and meaning of non-ordinary experiences and knowledge, a variety of Traditional Knowledge documentation and Knowledge application projects, and work on Tribal research sovereignty - including protocols, guidelines, and toolkits related to research. Julie has a PhD and M.A. in Anthropology as well as an M.A. in Northern Studies from the University of Alaska Fairbanks.

Liza Mack: Dr. Liza Mack serves as the Executive Director of the Aleut International Association, one of the six Permanent Participants to the Arctic Council. She is Unangax, born and raised in the Aleutians and has over 20 years experience working in and around Native organizations and communities. Dr. Mack received her PhD in Indigenous Studies from the University of Alaska Fairbanks where her research focused on political ecology, natural resource management, knowledge transfer and engagement of Native communities in the regulatory process and how that may or may not affect the Native Cultures of Alaska. She has an A.A. in Liberal Arts from UAS Sitka, a B.A. and M.S. in Anthropology from Idaho State University and has been an adjunct professor at UAF, teaching Native Cultures of Alaska and Intro to Unangam Tunuu.

Liza’s work is focused on cultural revitalization and community involvement in the regulatory process. She possesses knowledge of Alaska Native Cultures and is familiar with the local, regional, state, federal and international board processes that take place in Alaska and the Circumpolar North.  She values the importance of engaging Native people in these settings.

Victoria Qutuuq Buschman: Victoria is an Iñupiaq (Inuk) conservation biologist from northern Alaska now living in Nuuk, Greenland. Her focus is broadly in the conservation of lands, waters, and species across Arctic Indigenous homelands, and she has worked across the Arctic in an effort to promote how Indigenous peoples fundamentally shape Arctic biodiversity conservation, from research, to management, to actualizing the dreams of new protected areas. Her role in research is to challenge the colonial legacy of conservation and instead promote partnerships with Indigenous communities, knowledge, and governance to develop ethically-conscious, culturally-relevant, and fully knowledge-based conservation efforts in the Arctic.

Chief Vyacheslav Shadrin:  Chief Vyacheslav Shadrin is Chairperson of the Yukaghir Council of Elders, of the Republic of Sakha-Yakutia, in Russia. Since the late days of the Soviet Union, Chief Shadrin has systematically advanced the cause of the indigenous peoples and communities of the Far East of Russia. As a leader of the Yukaghir indigenous people, he is Vice President of the Russian Association of Indigenous Peoples of the North, Siberia and Far East (RAIPON) for Yakutia. Chief Shadrin has been instrumental in supporting Yukaghir’s land and language issues and, since the new millennium, has been constantly on the move to promote the larger movement of indigenous peoples, including Even, Evenk, Chukchi, Dolgan and Yukaghir peoples across the region in Yakutia, Chukotka, Magadan and Khabarovsk, among other areas. Chief Shadrin is also a research fellow at the Institute for Humanities Research and Indigenous Studies of the North, Siberian Division of Russian Academy of Sciences. He is an expert in Indigenous rights, ethnology, climate change, traditional land-use, language and culture.

11:40: Video: the words of wisdom from Indigenous and western science leaders

12:00-12:40 Talking Circle : Working together in the Arctic: A Journey From Respect to Co-Production. Are we ready?
Moderators: Norma Shorty (AAC)  and Andrey Petrov (IASSA)
Rapporteur: Katia Kontar (NSF)
KEY QUESTIONS:

Building resilience Arctic science amid the COVID-19 Pandemic:
This recently released paper in Nature explores how the disruption of the COVID-19 pandemic on Arctic research offers the opportunity for a reset to the way research is conducted in the region. "Arctic research faces unprecedented disruptions due to COVID-19. This ‘pause’ gives an opportunity to reflect on the current state and the future of Arctic science and move towards a more resilient, thus equitable, coordinated, safe and locally-embedded Arctic research enterprise." Read the full article here: https://www.nature.com/articles/s41467-020-19923-2