The bipartisan Defending Digital Democracy Project (D3P) invite campaign staff from all parties for a special briefing on campaign cyber security based off of the Belfer Center's Campaign Cybersecurity Playbook. Paul Begala and Karl Rove will kick off an important discussion led by former Director of Information Assurance at the NSA, Debora Plunkett, on the steps you can take to secure your campaign organization now.

*NOTE: You must be currently affiliated with a registered campaign in the United States to sign up for the call. 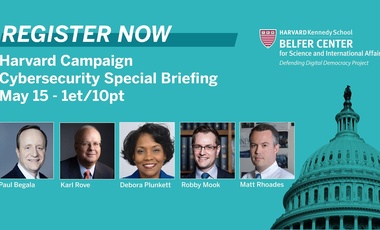 Questions from participants will be accepted in advance. The Defending Digital Democracy Project, based at Harvard’s Belfer Center, is a bipartisan team comprised of campaign operatives and experts in cybersecurity, technology, and national security with the mission to identify and recommend strategies, tools, and technologies to protect democratic processes and systems from cyber and information attacks.

Debora Plunkett is a cybersecurity leader with more than 30 years of experience. Culminating a career of U.S. federal service in 2016, she currently is Principal of Plunkett Associates LLC, a cybersecurity consulting business. Additionally, she serves as an Adjunct Professor at the University of Maryland University College Graduate School in the Cybersecurity program. She also serves on several corporate boards. Previously, Ms. Plunkett served first as the Deputy Director and thereafter for over four years as the Director of the National Security Agency's Information Assurance Directorate. Her efforts enabled continuous innovation and development of strong security solutions and policies for the protection of the classified communications of the United States government, serving the needs of a wide range of consumers from the White House to the war fighter.

Karl Rove, an iconic political strategist and one of the most sought-after political brains of our time, is best known for his provocative and robust knowledge of the major political issues of the day.  Mr. Rove served as Senior Advisor to President George W. Bush from 2000–2007 and Deputy Chief of Staff from 2004–2007. At the White House he oversaw the Offices of Strategic Initiatives, Political Affairs, Public Liaison, and Intergovernmental Affairs and was Deputy Chief of Staff for Policy, coordinating the White House policy-making process. Before Karl Rove became known as “The Architect” of President Bush’s 2000 and 2004 campaigns, he was president of Karl Rove + Company, an Austin-based public affairs firm that worked for Republican candidates, non-partisan causes, and non-profit groups. Today Mr. Rove writes a weekly op-ed for the Wall Street Journal, is a Fox News contributor and is the author of the newly released book, The Triumph of William McKinley: Why the Election of 1896 Still Matters, and the New York Times Bestseller, Courage and Consequence.

Paul Begala is a commentator for CNN, where he is part of the political team that has won both an Emmy Award and a Peabody Award. After helping engineer Bill Clinton's presidential campaign with his partner, James Carville, Begala served in the White House as Counselor to the President, one of Clinton's closest aides. In the 2012 campaign, he was a senior adviser for the pro-Obama Super PAC, making Begala one of the few people to play a critical role in electing two different presidents. He has consulted for political campaigns across the country and around the world, including advising politicians in Europe, Latin America, the Caribbean, the Middle East, and Africa. He helped his friend John F. Kennedy, Jr. launch the political magazine George and wrote the "Capitol Hillbilly" column. Paul is the author of several New York Times best-selling political books. Begala is an affiliated professor of Public Policy at Georgetown University.  He has also taught at the University of Texas and the University of Georgia.  Along with James Carville and GOP strategist Karl Rove, he was a recently inducted into the American Association of Political Consultants' Hall of Fame. Begala received his bachelor's degree in Government and his law degree from the University of Texas at Austin, where he was the student body president.