Disciples of the State? Religion and State-Building in the Former Ottoman World

A seminar with Kristin Fabbe, Assistant Professor of Business Administration, Harvard Business School and MEI Faculty Affiliate, on her recent book, Disciples of the State? Religion and State-Building in the Former Ottoman World (Cambridge University Press, 2019). 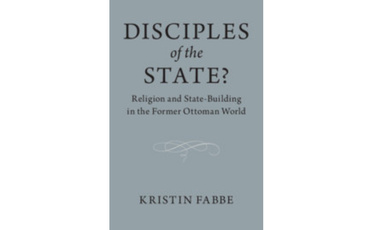 A seminar with Kristin Fabbe, Assistant Professor of Business Administration, Harvard Business School and MEI Faculty Affiliate, on her recent book, Disciples of the State? Religion and State-Building in the Former Ottoman World (Cambridge University Press, 2019).

About Disciples of the State

From the Cambridge University Press webpage:

"As the Ottoman Empire crumbled, the Middle East and Balkans became the site of contestation and cooperation between the traditional forces of religion and the emergent machine of the sovereign state. Yet such strategic interaction rarely yielded a decisive victory for either the secular state or for religion. By tracing how state-builders engaged religious institutions, elites, and attachments, this book problematizes the divergent religion-state power configurations that have developed. There are two central arguments. First, states carved out more sovereign space in places like Greece and Turkey, where religious elites were integral to early centralizing reform processes. Second, region-wide structural constraints on the types of linkages that states were able to build with religion have generated long-term repercussions. Fatefully, both state policies that seek to facilitate equality through the recognition of religious difference and state policies that seek to eradicate such difference have contributed to failures of liberal democratic consolidation."