Given recent events, how can U.S. policymakers understand and manage the drawbacks and vulnerabilities that arise with global economic networks that entangle the U.S. and China? What limits do global supply chains, information networks, and global financial systems pose to such efforts? How should policymakers modernize Cold War-era international rules of the road to bridge the economic and security policy divide? Join the Belfer Center and Center for Business and Government’s Economic Diplomacy Initiative for a conversation with Henry Farrell and Abraham Newman on the prospects for decoupling between the American and Chinese economies. The discussion will be jointly moderated by Aditi Kumar, Executive Director of the Belfer Center, and Ali Wyne, Non-Resident Senior Fellow at the Atlantic Council. 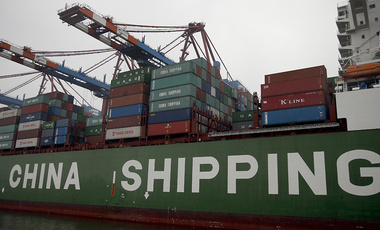 AP Photo/Michael Sohn, File
Containers are pictured on board of the 'Star' vessel of the China Shipping Container Lines shipping company at the harbour in Hamburg, Germany, Wednesday, Oct. 29, 2014.
About

Henry Farrell is the Stavros Niarchos Foundation Agora Institute Professor of International Affairs at SAIS, 2019 winner of the Friedrich Schiedel Prize for Politics and Technology, and Editor in Chief of the Monkey Cage blog at the Washington Post. Previously, he served as a Professor of Political Science and International Affairs at George Washington University. He works on a variety of topics, including democracy, the politics of the internet, and international and comparative political economy. He is author of Of Privacy and Power: The Transatlantic Fight over Freedom and Security (with Abraham Newman, 2019) and The Political Economy of Trust: Interests, Institutions and Inter-Firm Cooperation (2009).

He is a co-founder of the popular academic blog Crooked Timber, and also blogs at The Monkey Cage, which is currently hosted at the Washington Post and was winner of the 2010 The Week award for Best Blog. He has written articles for general publications including Foreign Affairs, The Financial Times, Foreign Policy, The National Interest, The American Prospect, The Washington Monthly, The Boston Review, The American Interest, Democracy, New Scientist, The Nation, Aeon, The Chronicle of Higher Education, Times Higher Education, and the Australian Academic Supplement among others.

Abraham L. Newman is Professor of Government and the Edmund A. Walsh School of Foreign Service at Georgetown University. He is the Director of the Mortara Center for International Studies. His research focuses on the politics generated by globalization and is the co-author Of Privacy and Power: The Transatlantic Struggle over Freedom and Security (Princeton University Press 2019), which was the winner of the 2019 Chicago-Kent College of Law / Roy C. Palmer Civil Liberties Prize, the 2020 International Studies Association ICOMM Best Book Award, and one of Foreign Affairs’ Best Books of 2019, co-author of Voluntary Disruptions: International Soft Law, Finance and Power (Oxford University Press 2018), author of Protectors of Privacy: Regulating Personal Data in the Global Economy (Cornell University Press 2008) and the co-editor of How Revolutionary was the Digital Revolution (Stanford University Press 2006). His work has appeared in a range of journals including Comparative Political Studies, International Organization, International Security, Science, and World Politics.

Aditi Kumar is Executive Director of the Belfer Center. Prior to coming to the Belfer Center, Kumar was a Principal at Oliver Wyman, a management consultancy, in the financial services and public policy practices. She worked primarily with U.S. commercial and investment banks as well as U.S. regulators and policymakers on designing and implementing financial and economic policy. Kumar previously served as a project manager at the World Economic Forum, responsible for leading policy discussions among financial sector executives and policymakers on managing financial risk and designing effective global financial regulation.

Kumar is a graduate of the Harvard Kennedy School and the Harvard Business School, where she studied international affairs, and specifically the nexus of national security and financial and economic policy. She previously worked at the International Affairs office of the U.S. Department of the Treasury, focused on assessing the public debt sustainability of Eastern European nations. She graduated from the Huntsman Program for International Studies and Business at the University of Pennsylvania with a Bachelor of Science in Economics and a Bachelor of Arts in International Studies.

Ali graduated from the Massachusetts Institute of Technology with dual degrees in Management Science and Political Science (2008) and received his Master in Public Policy from the Harvard Kennedy School (2017), where he was a course assistant to Joseph Nye.

Ali is a coauthor of Lee Kuan Yew: The Grand Master’s Insights on China, the United States, and the World (2013) and has contracted with Polity to write a book on great-power competition.