Attendance: This event is open to the public and hosted on Zoom. 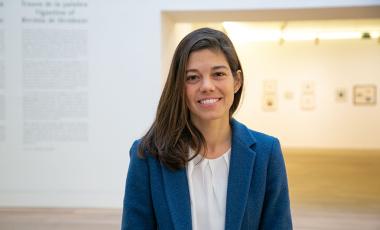 Professor Laura Diaz Anadon holds the chaired Professorship of Climate Change Policy at the University of Cambridge. At Cambridge she is also Director of CEENRG and Fellow Elect at St. John's College. She is also a long standing Associate at the Belfer Center for Science and International Affairs at the Harvard Kennedy School (HKS) at Harvard University, where she is a Visiting Scholar for 2021–2022.

Prof. Diaz Anadon joined the Department of Land Economy in September 2017 after a year as a faculty member in the Department in Politics and International Studies, also at the University of Cambridge. Before Cambridge she was an Assistant Professor of Public Policy at the Harvard Kennedy School between July 2013 and September 2016.  At HKS she held various posts, including Associate Director of the Science, Technology and Public Policy (STPP) program, Co-Principal Investigator of the Energy Technology Innovation Policy research group, Member of the Board of the Belfer Center for Science and International Affairs, co-Director of the Project of Innovation and Access to Technologies for Sustainable Development, and Faculty affiliate of the Harvard Center for the Environment and the Weatherhead Center for International Affairs.

Prof. Diaz Anadon has engaged with policymakers in the United States, China, South Korea, the United Kingdom, and Spain among others, and contributed to the UN Global Sustainable Development report and the Global Energy Assessment. She was on the advisory board of the project on "Accelerating Energy Innovation" at the International Energy Agency, has worked as a consultant for various organizations (i.e., Climate Strategies on a World Bank project, UNFCCC, and OECD), and has given numerous international invited seminars and plenary talks.

In April 2018, she was selected as a Lead Author in the 6th Assessment Report of the Intergovernmental Panel on Climate Change (IPCC) Working Group III on Climate Change Mitigation. She is a member of the Carbon Trust's Breakthrough Ideas Steering Group and the Cambridgeshire & Peterborough Independent Commission on Climate and on the Board of Directors of Cambridge Enterprise Ltd.  In June 2018 she was awarded the XVII Fundacion Banco Sabadell Prize for Economic Research for the best young Spanish economics researcher.

Prof. Diaz Anadon holds a Ph.D. in Chemical Engineering from the Magnetic Resonance and Catalysis Group at the University of Cambridge, a Masters in Public Policy from the Harvard Kennedy School, and a Masters in Chemical Engineering from the University of Manchester. She has also studied and worked on research at the University of Stuttgart, where she conducted her Diplomarbeit (masters thesis). She also carried out process engineering research projects at DuPont and Bayer Pharmaceuticals, collaborated extensively with Johnson Matthey Catalysts, and worked as a financial consultant at Oliver Wyman for banks on credit risk models for financing technology projects.

She has received various awards and scholarships, including from the US-UK Fulbright Commission, the Fundacion Caja Madrid, the Real Colegio Complutense, the European Federation of Chemical Engineers, and the Britain's Top Younger Engineers Award at the House of Commons. She is member of the editorial board of Energy Research & Social Science, Environmental Research Reviews  and the Oxford Open Energy Journal.  She was a member of the Editorial Advisory Panel of Nature Energy during the first couple of years of the journal's existence.