Nuclear weapons and nuclear reactors are designed, built, deployed, and managed—with intention and purpose—by human beings embedded in and shaped by institutional, social, and political contexts. These contexts affect how people interpret and respond to the benefits and dangers of nuclear technologies. But whose interpretations and modes of reasoning count as authoritative, competent, and trustworthy—and whose are discounted or dismissed?

This event is hosted by the Project on Managing the Atom (MTA) as part of its Atomic Voices series, a discussion forum for perspectives on diversity, inclusion, and belonging in the nuclear field. 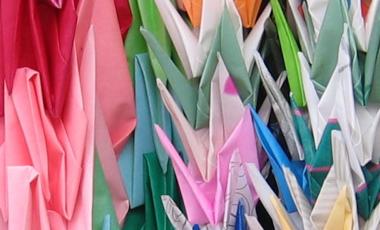 Danapit/Wikimedia Commons
An artistic representation of origami cranes, which are displayed at the Hiroshima Children's Peace Monument.

Nuclear weapons and nuclear reactors are designed, built, deployed, and managed—with intention and purpose—by human beings embedded in and shaped by institutional, social, and political contexts. These contexts affect how people interpret and respond to the benefits and dangers of nuclear technologies. But whose interpretations and modes of reasoning count as authoritative, competent, and trustworthy—and whose are discounted or dismissed? How did the existing nuclear hierarchies of knowledge and practice come into being? What threats and opportunities are inherent in expanding and diversifying the intellectual, institutional, and regional engagements with the nuclear threat, and what are the barriers to such expansion? The panel brings together an international group of scholars to debate these questions from various vantage points: language, intellectual and institutional history, and colonial legacy.

Dr. Carol Cohn is the founding director of the Consortium on Gender, Security and Human Rights, and a leader in the scholarly community addressing issues of gender in global politics, armed conflict and security.

Dr. Cohn’s research and writing has focused on gender and security issues ranging from work on the discourse of civilian nuclear defense intellectuals and U.S. national security elites to gender integration issues in the US military, feminist approaches to thinking about weapons of mass destruction, the gender dimensions of contemporary armed conflicts, the concept of “vulnerability” in security and humanitarian discourse, and gender mainstreaming in international peace and security institutions, including the passage of UN Security Council Resolutions on women, peace and security  and the on-going efforts to ensure its implementation at the international, national, and grassroots levels.

Dr. Cohn’s work has been published in a number of arenas in both the academic and policy world.

In addition to her research, Dr. Cohn conducts training and workshops on 1325 and consults on gender mainstreaming and gender and organizational change. This work includes a series of workshops at the UN Department of Peacekeeping Operations (DPKO), designed to help DPKO headquarters staff develop an Action Plan for implementing 1325 and mainstreaming gender in peacekeeping operations. Dr. Cohn has led other workshops on implementing 1325 for the Kennedy School of Government at Harvard; with women leaders from the Democratic Republic of Congo, Melanesia, and Kosovo/a; and with the Iraqi Ministry of Women’s Affairs and the Iraqi Ministry of Human Rights.

In addition to her research and policy consulting, Dr. Cohn is deeply committed to teaching in the area of gender and global security. She came to the position as Director of the Consortium after twenty years of teaching at the college and university level.  Most recently, she has offered a course at the United Nations University for Peace in Costa Rica on “Gender Mainstreaming in Peacekeeping Operations and Humanitarian Assistance.”

Dr. Cohn’s vision of the Consortium on Gender, Security and Human Rights is as a go-to location for scholars, policy-makers, and practitioners interested in learning and teaching about gender and security. Dr. Cohn can be reached at carol.cohn@genderandsecurity.org.

Dr. Benoît Pelopidas founded the program Nuclear Knowledges and holds the chair of excellence in security studies at CERI (Sciences Po). He is also an affiliate of the Center for International Security and Cooperation (CISAC) at Stanford University and has been a frequent visiting fellow at Princeton University’s Program on Science and Global Security.

In France, Nuclear Knowledges is the first scholarly research program on the nuclear phenomenon, which is fully independent and transparent on its funding sources.

He has been awarded four international prizes for his research. In 2017, he has been awarded one of the most competitive EU grants: an ERC Starting Grant (1,5 million € over five years) on nuclear weapons choices.

He focuses on the construction of knowledge about nuclear weapons, their institutional, conceptual, imaginal and memorial underpinnings. Conceptually, he elaborates nuclear vulnerability beyond its material and strategic dimensions. Empirically, Benoit’s focus is on nuclear “close calls”, crisis management and French nuclear history.
Over the last seven years, he has been engaging with policymaking elites in the US and Europe as well as civil society groups to advocate innovative nuclear disarmament and arms control policies.

Since 2013, he has been coordinating a team of 13 international researchers to write the first global history of the so-called "Cuban Missile Crisis" based on primary sources worlwide, which revisits fundamental concepts of IR and security studies such as the nuclear revolution, power, sovereignty, neutrality and alliance dynamics.

Dr. Jayita Sarkar is a historian and Assistant Professor at Boston University’s Frederick S. Pardee School of Global Studies, where she is also the founding director of the Global Decolonization Initiative. Her research specialization is in 20th century global South Asia, connected partitions, history of global capitalism, and nuclear technologies. Her prize-winning research has been published in the International History Review, Journal of Cold War Studies, Cold War History, and elsewhere.

Her first book, Ploughshares and Swords. India’s Nuclear Program in the Global Cold War, will be published by Cornell University Press in spring 2022. It examines the first forty years of India’s nuclear program through the prisms of technopolitics and geopolitics. The book foregrounds the Indian nuclear program’s civilian and military features by probing its close relationship with the space program. It shows how through nuclear and space technologies, India’s leaders served the technopolitical aims of economic modernity and the geopolitical goals of deterring adversaries.

Her newest book-length project, titled Connected Partitions: From South Asia to the World, is a study of entangled social, economic, and political histories of partitions. By focusing on stateless people, it investigates the travel itinerary of territorial divisions from the borderlands of Bengal-Burma to the League of Nations and the United Nations.

She is finishing her second book manuscript, titled Light Water Capitalism: US Global Power through Nuclear Things, which is a reexamination of U.S. nonproliferation efforts through histories of capitalism, empire, and decolonization. The book foregrounds the role of economic actors and processes, and the resultant dispossession of land and exploitation of labor in various parts of the world. In 2020-21, she was on research leave to make progress on this project as a visiting fellow at the Weatherhead Initiative on Global History and as Ernest May Fellow in History & Policy at Harvard University.

Since 2017-18, Professor Sarkar has served as the co-convener of the BU Pardee School Research Seminar (open to faculty at BU and elsewhere).

Dr. Mariana Budjeryn (moderator) is a Research Associate with the Project on Managing the Atom (MTA) at the Harvard Kennedy School’s Belfer Center. Formerly, she held appointments as a Stanton Nuclear Security Fellow at MTA, a fellow at Harvard Davis Center for Russian and Eurasian Studies, and as a visiting professor at Tufts University and Peace Research Institute Frankfurt. Mariana’s research focuses on the international non-proliferation regime, arms control, and post-Soviet nuclear history. Her analytical contributions appeared in The Nonproliferation Review, Harvard International Review, World Affairs Journal, Arms Control Today, The Washington Post, Bulletin of the Atomic Scientists, War on the Rocks, and in the publications of the Woodrow Wilson International Center for Scholars where she is a Global Fellow. Mariana’s book Inheriting the Bomb: Soviet Collapse and Nuclear Disarmament of Ukraine is forthcoming in 2022 with Johns Hopkins University Press. She holds a PhD in Political Science, an MA in International Relations from Central European University (formerly) in Budapest, Hungary, and a BA in Political Science from the Kyiv-Mohyla Academy in Ukraine.