UNRWA, Its Mandate, Successes, and Challenges

At a moment when public policy and public health are becoming increasingly intertwined, UNRWA Commissioner-General Philippe Lazzarini will share his unique perspective on UNRWA’s past, present, and future strategies for supporting Palestinian refugees. MEI Faculty Director, Tarek Masoud, will moderate this discussion. 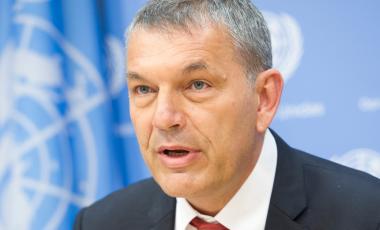 Philippe Lazzarini
About the Event
About the Speaker
Featured People

At a moment when public policy and public health are becoming increasingly intertwined, Commissioner-General Lazzarini will share his unique perspective on UNRWA’s past, present, and future strategies for supporting Palestinian refugees in an event moderated by MEI Faculty Director Tarek Masoud.

Prior to his appointment to UNRWA, Mr Lazzarini served, from August 2015, as the Deputy UN Special Coordinator (UNSCOL) and as the Resident and Humanitarian Coordinator for Lebanon.

Mr Lazzarini has over 30 years of professional experience, including in leadership positions with the United Nations, the private sector and the International Committee of the Red Cross (ICRC). He has extensive experience in humanitarian assistance and international coordination in conflict and post-conflict areas at senior levels, including through his assignment to the United Nations Assistance Mission in Somalia as Deputy Special Representative, Resident and Humanitarian Coordinator, from 2013 to 2015. He joined the United Nations in Iraq in 2003 and since then has held a number of senior positions, both at Headquarters in New York, and in Angola, Somalia and the occupied Palestinian territory. Prior to joining the United Nations, he worked with Union Bancaire Privée in Geneva as Head of the Marketing Department.

From 1989 to 1999, Mr Lazzarini worked with ICRC as the Deputy Head of Communications in Geneva, Head of Delegation in Rwanda, Angola, and Sarajevo, and as a delegate in Southern Sudan, Jordan, Gaza, and Beirut. He started his professional career in 1987 as an economist with the Canton of Bern in Switzerland.