Victory at Sea:Paul Kennedy on How Naval Power Reshaped the World

Join the Applied History Project for a lecture and panel discussion featuring Paul Kennedy, the J. Richardson Dilworth Professor of History at Yale University and celebrated author of The Rise and Fall of the Great Powers. Focusing on his new book Victory at Sea: Naval Power and the Transformation of the Global Order in World War II, Kennedy will explore how the great navies of WWII turned the globe upside down between 1936 and 1946—and what lessons this decade offers for today’s world. 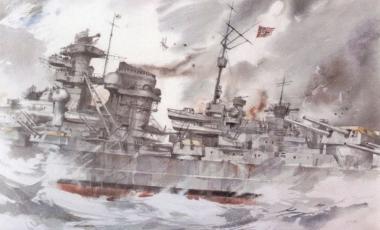 The Applied History Working Group is delighted to welcome Paul Kennedy, the J. Richardson Dilworth Professor of History at Yale University, for a discussion of his new book Victory at Sea: Naval Power and the Transformation of the Global Order in World War II (Yale University Press). In a panel discussion featuring Fredrik Logevall (Laurence D. Belfer Professor of International Affairs, Harvard Kennedy School) and Graham T. Allison (Douglas Dillon Professor of Government, Harvard Kennedy School), Kennedy will delve into his rich new history of naval warfare in World War II—and, as an applied historian, explain what lessons this era can impart for a modern period of great power competition.

All Harvard students, faculty, and fellows are welcome to attend. Free copies of the beautifully illustrated Victory at Sea, featuring over 50 maritime paintings from the late Ian Marshall, will be available on a first come, first served basis for a limited number of attendees.

Paul M. Kennedy is the J. Richardson Dilworth Professor of History and Distinguished Fellow of the Brady-Johnson Program in Grand Strategy at Yale University. He served as the Director of International Security Studies programs, funded by the Smith Richardson Foundation, from 1989 until 2017, and he is now the director of the maritime and naval studies initiative. He is internationally known for his writings and commentaries on global political, economic, and strategic issues. His best-known work is The Rise and Fall of the Great Powers, which provoked an intense debate upon its publication in 1988 and has been translated into over twenty languages.

“In this engaging narrative, brought to life by marine artist Ian Marshall’s beautiful full-color paintings, historian Paul Kennedy grapples with the rise and fall of the Great Powers during World War II. Tracking the movements of the six major navies of the Second World War—the allied navies of Britain, France, and the United States and the Axis navies of Germany, Italy, and Japan—Kennedy tells a story of naval battles, maritime campaigns, convoys, amphibious landings, and strikes from the sea. From the elimination of the Italian, German, and Japanese fleets and almost all of the French fleet, to the end of the era of the big-gunned surface vessel, the advent of the atomic bomb, and the rise of an American economic and military power larger than anything the world had ever seen, Kennedy shows how the strategic landscape for naval affairs was completely altered between 1936 and 1946.”