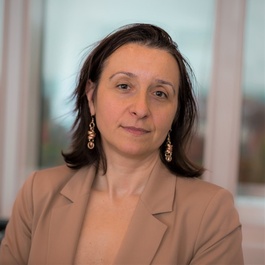 Francesca Giovannini is the Executive Director of the Project on Managing the Atom at the Harvard Kennedy School's Belfer Center for Science & International Affairs. In addition, she is an Adjunct Associate Professor at the Fletcher School of Law and Diplomacy at Tufts University, where she designs and teaches graduate courses on global nuclear policies and emerging technologies.

Previously, Dr. Giovannini served as Strategy and Policy Officer to the Executive Secretary of the Comprehensive Nuclear Test Ban Treaty Organization (CTBTO), based in Vienna. In that capacity, she oversaw the promotion of CTBT ratification as a confidence-building mechanism in regional and bilateral nuclear negotiations, elevating the profile of the CTBT in academic circles and promoting the recruitment of female scientists from the Global South.

Additionally, Dr. Giovannini served for five years at the American Academy of Arts and Sciences in Boston as Director of the Research Program on Global Security and International Affairs. Working to leverage academic knowledge to inform better policies, she led and promoted countless academic research initiatives on issues such as bilateral and multilateral arms control frameworks, regional nuclear proliferation dynamics, as well as nuclear security and insider threats.

With a Doctorate from the University of Oxford, UK and two Masters from the University of California, Berkeley, Dr. Giovannini began her career working for international organizations and the Italian Ministry of Foreign Affairs. She led humanitarian and development projects targeting refugees and internally displaced people in Lebanon, Turkey, and the Palestinian Territories. She also worked as a consultant for the United Nations Crisis Prevention and Recovery Network, drafting regional and national strategies to set-up political violence early warning systems in the Levant and in the South-Pacific.

Dr. Giovannini speaks Italian, English, and French fluently. She is an assiduous traveller, an amateur photographer, and a devoted collector of spiritual artifacts from around the world.