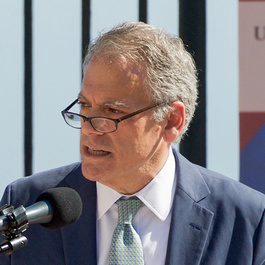 A career member of the Senior Foreign Service, Ambassador DeLaurentis was the Chief of Mission at the U.S. Embassy in Havana, Cuba. Prior to taking up this position in August 2014, Ambassador DeLaurentis served for three years as the Alternate Representative for Special Political Affairs at the U.S. Mission to the United Nations. Prior to that posting, he was Deputy Assistant Secretary of State for the Bureau of Western Hemisphere Affairs.

In Washington, Ambassador DeLaurentis served as Executive Assistant to the Under Secretary of State for Democracy and Global Affairs, Special Assistant to the Assistant Secretary of State for Western Hemisphere Affairs, Director of Inter-American Affairs at the National Security Council, and as an International Relations Officer in the Bureau of International Organizations. Prior to entering the Foreign Service, Ambassador DeLaurentis held a senior staff position at the Council on Foreign Relations. He is a graduate of the Georgetown University School of Foreign Service and Columbia University Graduate School of International and Public Affairs.