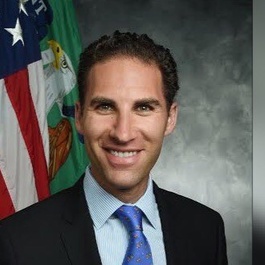 Michael B. Greenwald is a thought leader on the future of money and fintech innovation as well as a former U.S. financial diplomat, professor, and author with over 15 years of experience in finance, corporate and family office strategy, public policy, intelligence, and diplomacy.

Michael is a senior executive at Amazon Web Services (AWS) serving as its Global Lead for Digital Assets. He leads U.S. and global strategy for Amazon on integrating cloud systems into public sector institutions and government agencies to manage Central Bank Digital Currencies, digital assets, blockchain technology, and NFTs. He leads an AWS Digital Asset and Future of Money Task Force composed of the leaders in the digital currency space including Circle, CoinBase, Chainalysis, TRM Labs, and Elliptic to provide thought leadership and education for the highest levels of the U.S. Government, law enforcement, regulators, and private industry.

Michael has served at the highest levels of the U.S. Government: he spent almost a decade of his life in the public sector working for the United States Treasury Department culminating with his position as America's first and most senior Treasury diplomat to Qatar and Kuwait. In this role he acted as principal liaison to each nation's banking sectors, finance ministries, and sovereign wealth funds while serving under two presidential administrations and three treasury secretaries. Prior, he held senior policy, legal, counterterrorism and intelligence roles requiring travel to over 20 countries including North Africa, Europe, Asia and was on the Treasury/State Department team that visited Ukraine in 2014 following the annexation of Crimea to craft sanctions against Russia. He has written for the Presidents Daily Brief and was part of the Treasury teams that crafted sanctions against Iran, North Korea, Libya, ISIS, and Al-Qaeda.

After departing Treasury, he used overseas experiences and knowledge of international and monetary policy to help lead the domestic and international growth of a global multi-family office Tiedemann Advisors. Michael helped oversee the firm’s growth from $12 billion in assets to over $30 billion. He was also named the firm’s first Director for Digital Asset Education providing education to families and strategy to the firm’s investment team on issues related to blockchain technology.

Michael is currently an Adjunct Professor at Columbia University School of International and Public Affairs (SIPA) leading a digital asset capstone program, a senior fellow at the Atlantic Council Geoeconomics Center and senior advisor to its President and CEO Fred Kempe, and an adjunct senior fellow at the Center for New American Security. Michael is Deputy Director at the Trilateral Commission leading the David Rockefeller Fellows Program, member of the Bretton Woods Committee, and member of the Wilson Center Digital Assets Taskforce. He previously served as an Adjunct Professor at Boston University Pardee School of International Relations teaching its first course on counter-terrorist financing and the new emerging economy in the Middle East.

As a former fellow at Harvard Kennedy School’s Belfer Center for Science and International Affairs, he published over 50 articles at Harvard on the U.S. dollar, geopolitics, the contemporary art market, and the future of money. He has also been featured in Wall Street Journal, New York Times, Barron’s, Financial Times, Associated Press, and on CNBC.

His philanthropic work has included chairing the U.S. Holocaust Memorial Museum’s Next Generation Board, serving as the Vice Chairman of the board for the Promise Fund of Florida with U.S. Ambassador Nancy Brinker, and, in conjunction with Palm Beach Synagogue, helping launch an annual event in Palm Beach on countering antisemitism. He previously served on the Board of Susan G. Komen, was a senior advisor to Dana Farber President and CEO Dr. Laurie Glimcher, and was member of Boston University School of Law Dean's Advisory Board.

He holds a Juris Doctor from Boston University, a Master’s from Boston University’s Frederick S. Pardee School of Global Studies, and a Bachelor of Arts in History from George Washington University. Raised in Brookline, Massachusetts, he now lives in Palm Beach, Florida with his wife. He served on the Board of The Town of Palm Beach Investment Committee and was honored by Palm Beach Illustrated as one of the city’s 100 most influential business leaders.