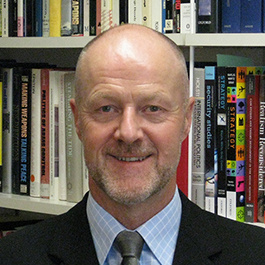 Trevor Findlay is a Principal Fellow at the School of Social and Political Sciences at the University of Melbourne, Australia and a former Associate with the Project on Managing the Atom. Dr. Findlay was a joint fellow/Senior Fellow with the International Security Program and Project on Managing the Atom (MTA) at the Belfer Center from 2011–2015. From 2005–2015, he was a professor at the Norman Paterson School of International Affairs at Carleton University in Ottawa, Canada and holder of the William and Jeanie Barton Chair in International Affairs.

Dr. Findlay has a B.A. Honours degree from the University of Melbourne in political science and a Masters degree and Ph.D. in International Relations from the Australian National University (ANU). He spent thirteen years in the Australian diplomatic service, with postings in Tokyo, Mexico City, and Geneva. This was followed by academic appointments at the Peace Research Centre at the ANU, including acting directorship, and four years as a project leader at the Stockholm International Peace Research Institute (SIPRI) in Sweden, where he inaugurated the project on peacekeeping and international security. From 1998–2005, he was Executive Director of the London-based  non-governmental organization, the Verification Research, Training and Information Centre (VERTIC). Professor Findlay was appointed to the United Nations Secretary-General's Advisory Board on Disarmament Matters in 2013.

His current research focuses on global nuclear governance. His report on the International Atomic Energy Agency (IAEA), Unleashing the Nuclear Watchdog, was published in 2012 by the Centre for International Governance Innovation (CIGI) in Waterloo, Canada. Dr Findlay's most recent book is Nuclear Energy and Global Governance: Ensuring Safety, Security and Nonproliferation (London: Routledge, 2011).