Views on the Economy and the World

A blog by Jeffrey Frankel

All Views on the Economy and the World posts

Fear of Fracking: The Problem with the Precautionary Principle

An amazing thing has happened over the last five years.   Against all expectations, American emissions of carbon dioxide into the atmosphere, since peaking in 2007, have fallen by 12%, back to 1995 levels.  (As of 2012. US Energy Information Agency).   How can this be?   The United States did not ratify the Kyoto Protocol to cut emissions of greenhouse gases below 1997 levels by 2012, as Europe did.

Was the achievement a side-effect of reduced economic activity?   It is true that the US economy peaked in late 2007, the same time as emissions.   But the US recession ended in June 2009 and GDP growth since then, though inadequate, has been substantially higher than Europe’s.  Yet US emissions continued to fall, while EU emissions began to rise again after 2009 (EU).  Something else is going on.

The primary explanation, in a word, is “fracking.”   In fourteen words: the use of horizontal drilling and hydraulic fracturing to recover deposits of shale gas.

One can virtually prove that shale gas is the major factor behind the fall in US emissions.  Natural gas, especially when burnt in combined-cycle gas turbine power plants, emits only half as much greenhouse gas (GHG) as coal.   Ten years ago domestic natural gas production appeared to be reaching its limits; the industry was so sure of this that it made big investments in terminals to import Liquefied Natural Gas (LNG).  Yet the fracking revolution has increased the supply of natural gas so rapidly since then that LNG facilities are being expensively converted to export.   Clean natural gas occupies a rapidly increasing share of the generation of electric power.   It has come largely at the expense of coal’s share.  Within power generation, natural gas is up 37% since 2007, while coal is down 25%.  As a result, natural gas has drawn close to coal as the number one source of US power — unthinkable a short time ago. Renewables have been rising, but still constitute only 5% of power generation in the US.  This is less than hydroelectric and far less than nuclear, let alone coal or gas.

Meanwhile, the role of coal - the dirtiest fuel — has been rising in the energy mix of the rest of the world, not falling (IEA, Dec. 2012).  Coal’s share of power has even risen since 2010 in Europe (EC), where some countries are phasing out emission-free nuclear power and no shale gas boom has appeared.    (The trans-Atlantic comparison does not offer grounds for self-righteousness, however.   GHG emissions remain far higher in the US than in Europe.)

The advent of shale gas in the United States has had a variety of implications for the economy, national security, and the environment.  The implications are surely more good than bad.

Moving beyond economics, the reduction in net energy imports is good for US national security.  What happens in the Middle East will still matter, but as oil imports fall American foreign policy will not be as constrained as in the past. US net oil imports have already fallen by half since 2007 and the downward trend is expected to continue.   In Europe, the new developments have the potential to break Russia’s troublesome stranglehold on the supply of natural gas.

That leaves the environment.  Here as well the effects on net appear beneficial.   As already noted, the substitution of natural gas in place of coal slows global climate change. Indeed the United States is now on track to meet the Obama administration’s international commitment of emissions 17% below 2005 levels by 2020.  But natural gas is also better for local air quality.  Burning coal puts sulfur dioxide, nitrous oxide, mercury and particulates into the air.

Yet it is among environmentalists that heartfelt opposition to fracking has arisen.  Why?

Environmentalists seem to have three sets of fears.  First, they worry that shale gas will displace renewable energy sources such as wind and solar power.  But the fact is that GHG emissions can’t be reduced without cutting coal emissions and that shale gas is already displacing coal in the US.  This is not speculation about the future.  It has already been happening.  If renewables or fusion or something else currently unknown can take over after 2050, then great.  But we would still need natural gas as a bridge from here to there.

Put differently, if the world continues to build coal-fired power plants at the rate it has been, those plants will still be around in 2050 regardless what other technologies have become available in the meantime.  Solar power can’t stop those coal fired plants from being built today.  Natural gas can.

Cheap natural gas also helps with heating buildings and increasingly with transportation as well - particularly if electric plug-in cars become more widespread.  In overall primary energy production, natural gas at 31% has now surpassed coal, at 26%. The graph below shows the two lines crossing. (Table 1.2,  US EIA).  Solar and wind together account for only 2% of US primary energy production. 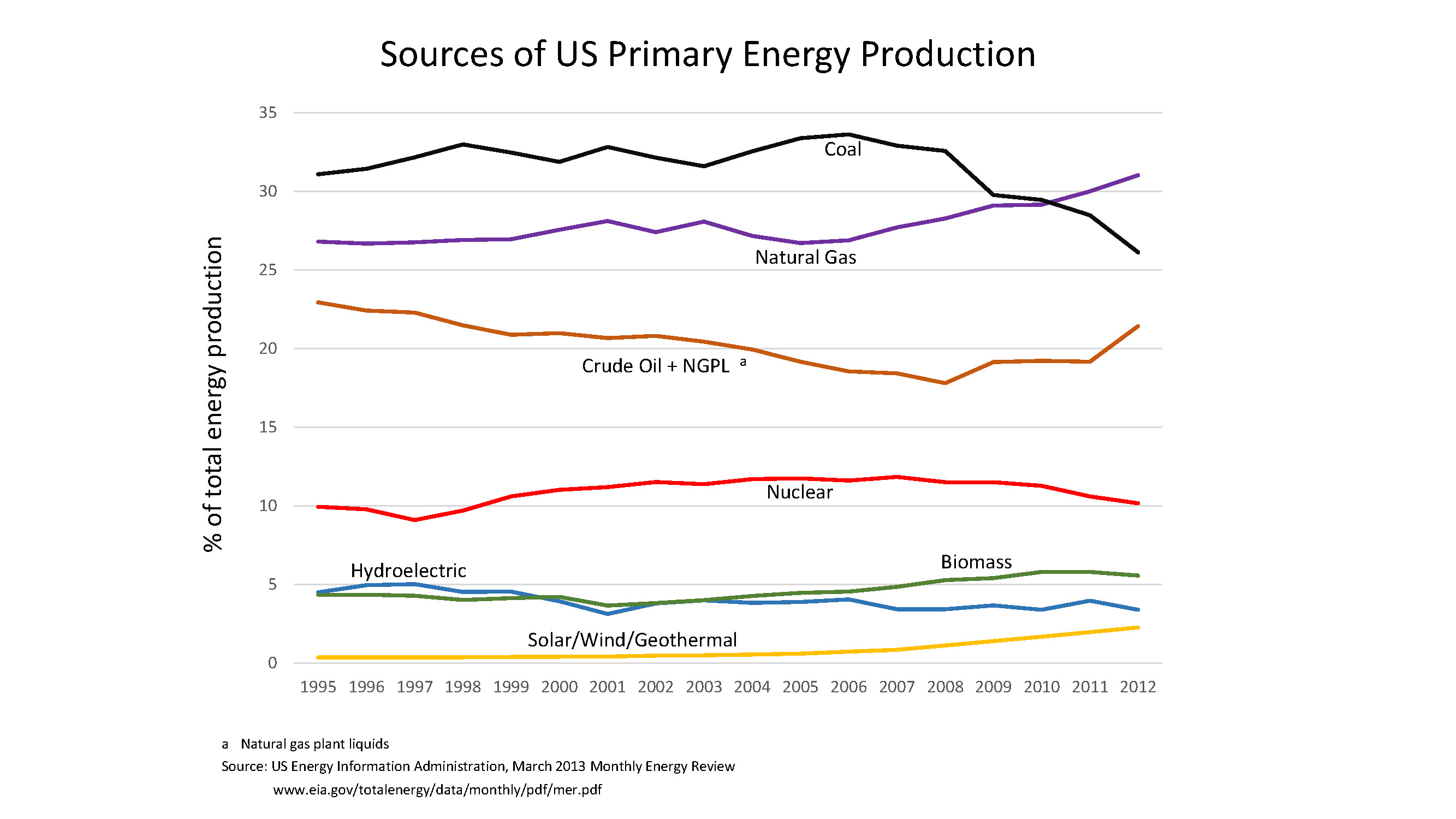 Second, environmentalists worry about local risks, especially to water supplies.  There are also fears of methane leaks and earthquake triggerings.  Such concerns cannot be dismissed.    It is not enough to proclaim that fracking should be safe if operators are responsible and regulators do their job.   One must take into account the likelihood that in some under-regulated US state someone will not act responsibly and some local water supply will get contaminated.

One lesson is that we need to maintain high-quality environmental and safety regulation, with an emphasis on enforcement, unlike the sort of lax regulation of oil drilling in the Gulf of Mexico that gave us the Deepwater Horizon explosion.  The industry should follow best practices, including making public the chemicals it uses.

But in deciding whether to allow fracking to proceed - and this is what we are talking about: France has banned it and New York state has a moratorium - one must compare the risks of fracking with the risks of the alternative.  Even if there were a serious mishap with fracking, it is unlikely that it would do more damage to health, safety and the environment than the Deepwater Horizon disaster (oil), the Fukushima catastrophe (nuclear), or coal mining tragedies that happen every year (along with lung disease, water pollution from tailings, soil erosion, and other effects of coal).

Finally, some, especially in Europe, have a fear of new and unfamiliar technologies in general.  The claim that the burden of proof lies with the innovation, rather than symmetrically with the status quo, sometimes goes under the name of the “precautionary principle.”   It helps explain the tendency to forget to compare the worst-case risks of the new technology with the known downsides of the old technologies.

One analogy is Genetically Modified Organisms (GMOs).  It is true that a fundamentally new technology tends to pose risks that are unknown.   But that is no excuse for neglecting to weigh in the balance the known risks of the existing technology.  In the case of genetically modified crops, costs of doing without them include greater need for insecticides and possible food shortages in poor countries.

But GMOs may not be a sufficiently powerful example: Europeans tend to oppose them as well.  So here is a challenge to the precautionary principle with which it is difficult to argue.   Should men worried about their virility be daring enough to try the unfamiliar new technology, Viagra?  Or should they stick with the “tried and true” traditional remedy:  powdered rhino horn?

[This is an extended version of a column at Project Syndicate. Comments can be posted there.].
For more information on this publication: Belfer Communications Office
For Academic Citation: Frankel, Jeffrey.“Fear of Fracking: The Problem with the Precautionary Principle.” Views on the Economy and the World, April 18, 2013, https://www.belfercenter.org/publication/fear-fracking-problem-precautionary-principle.