This fall, Sultan Sooud Al-Qassemi, an Emirati columnist and researcher who specializes in social, political, and cultural affairs in the Arab Gulf and is the founder of the Barjeel Art Foundation in the UAE, joined the Middle East Initiative as the Kuwait Foundation Visiting Scholar. One of the ways he has engaged with the Harvard community and shared his expertise during the fall semester is through his study group titled “Investigating the Politics of Modern Middle Eastern Art.”

The study group provided students and fellows from across Harvard with the opportunity to understand Middle Eastern politics from a unique perspective: through the study of the region’s art production.

“Many students approach the region of West Asia and North Africa through an exclusively political context,” Al-Qassemi said. “It is essential to consider the cultural dynamics that influence political and social spheres across the region, such as the formation of national identities and championing of pan-Arab causes.”

This nine-session series spanned important historical moments from the Suez Crisis to the Lebanese Civil War and from the Ba’ath coup in Iraq to the short-lived United Arab Republic. Al-Qassemi’s syllabus guided students in exploring the relationship between the evolving political landscape and contemporary Arab art. Each discussion focused on a specific art piece in its political context, which helped students better understand that political context and the artwork itself.

“It is essential to consider the cultural dynamics that influence political and social spheres across the region.”

Students contextualized the artwork historically, politically, and culturally through specific readings and in discussions with guest speakers, such as Alex Dika Seggerman, Assistant Professor of Islamic Art History at Rutgers University and Alessandra Amin, PhD candidate in art history at the University of California, Los Angeles, who enriched the curriculum with their expertise. To encourage a multi-dimensional analysis of the art, Al-Qassemi displayed each piece of artwork using multiple classroom screens so that students could consider the pieces from different and specific vantage points.

Of particular importance to the curriculum was the definition of “modern” art. The group discussed how many of the Arab artists they studied rejected western notions of modern art, instead merging regional traditions with their own conceptions of modernity. In this way, these Arab artists redefined modernity through the lens of their own political environments, developed influential networks of innovators and intellectuals, and became important institution builders. 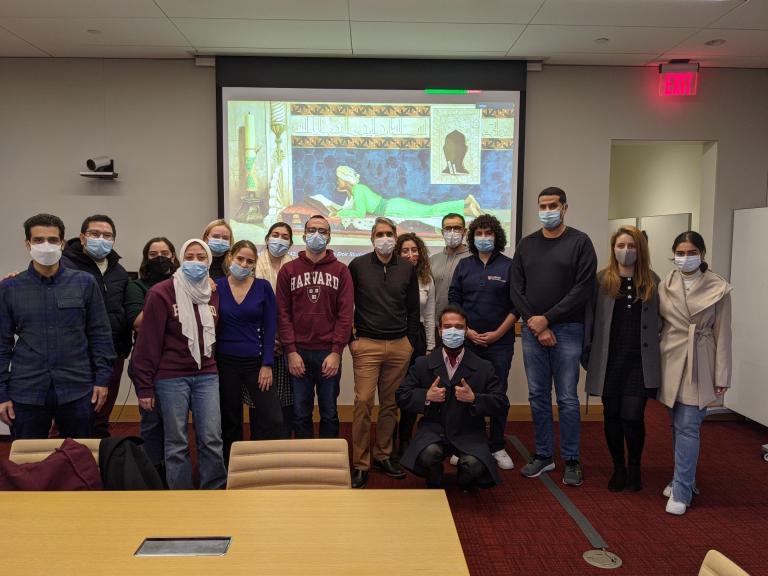 Al-Qassemi extended this inquiry by organizing a class trip to the Harvard Art Museum to see the “ReFrame” project, which aims to elevate the artwork of women, African Americans, and other minorities. Al-Qassemi explained, “Museums around the world are considering ways to diversify their offerings in terms of the works on display and their collecting practices. Just as it is impossible to consider global modernity without looking at the art of the Global South, it is equally impossible to study western modernity without looking at minority artists.”

Al-Qassemi's goal was for students to walk away with a better grasp of the interconnected political and cultural dynamics that shape the Middle East. “I hope that participants now have a deeper understanding of this vibrant part of the world that they will carry into their studies, careers, and their lives,” he said.

According to participant Lana Salman, an Emirates Leadership Initiative Research Fellow at the Middle East Initiative, Al-Qassemi succeeded in achieving that goal. “The course shifted my political sensibilities and introduced me to new ways of grasping the wide reach of politics in the region’s aesthetics, art forms, and movements.”