Why Trump May Not Get a Call from Iran Soon

President Trump is expecting a call from Iran. He believes that Iran’s economy is collapsing, and this will eventually force Iran to ask for a new deal instead of attempting to keep the JCPOA alive. Apparently, some officials in the White House are hoping that bringing Iran’s economy on its knees will leave Iranians no choice but to surrender and to accept whatever the US wants—including secretary Pompeo’s long list of twelve demands. But these expectations might not come true. Iran’s economy is having difficulties for sure but is far from “collapsing”.

While the Iranian rial has lost more than 50 percent of its value against the US dollar in the unofficial market since January 2018,[1] this is nothing new for Iran’s economy. Every president since the end of Iran-Iraq war had to deal with a sort of analogous currency crisis. During the late Ayatollah Rafsanjani’s presidency (1989 – 1999), the official exchange rate fell from 72 rials per US dollar to 1755 rials per US dollar. In the unofficial market, the price of the dollar increased about fourfold during this period (from 1192 rials to 4750 rials). Under Seyyed Mohammad Khatami’s presidency (1997 to 2005), the currency depreciated more than 80 percent in the official market. At the same time span, the dollar price in the unofficial market reached over 9000 rials from a previous exchange rate of 4730 rials. The exchange rate unification achieved under Khatami administration was not maintained by his successor. During the Mahmoud Ahmadinejad presidency (2005 to 2013), the price of dollar in the official and the unofficial market increased to around 24790 and 32700 rials respectively, from the previous exchange rate of 9000 rials per dollar. Notably, these remarkable depreciations mostly took place during the second term of the incumbent president, as each president put more effort to stabilize the exchange rate during their first term to secure re-election, and was less inclined or capable to resist against depreciation in their second terms. In this regard, history is just repeating itself for President Rouhani. In fact, Iranian foreign exchange reserves started to decrease from the second quarter of 2016, well before the 2016 U.S. Presidential elections in November. Of course, the U.S. withdrawal from the Iran deal aggrandized this trend. 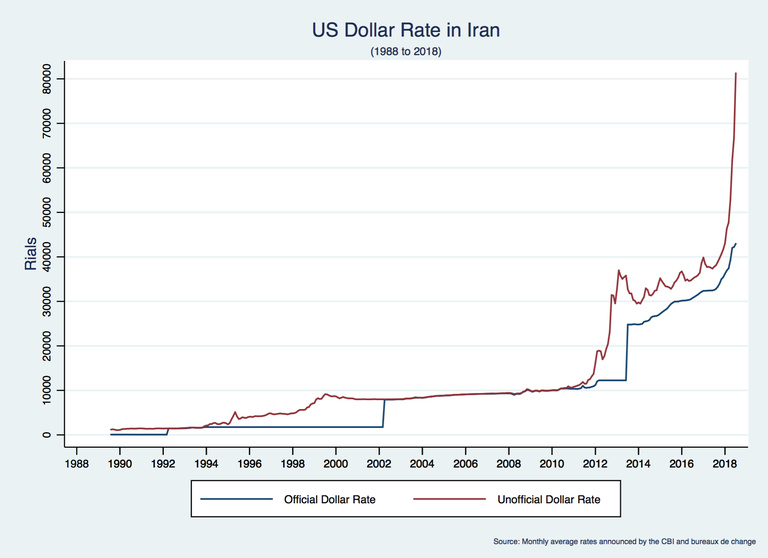 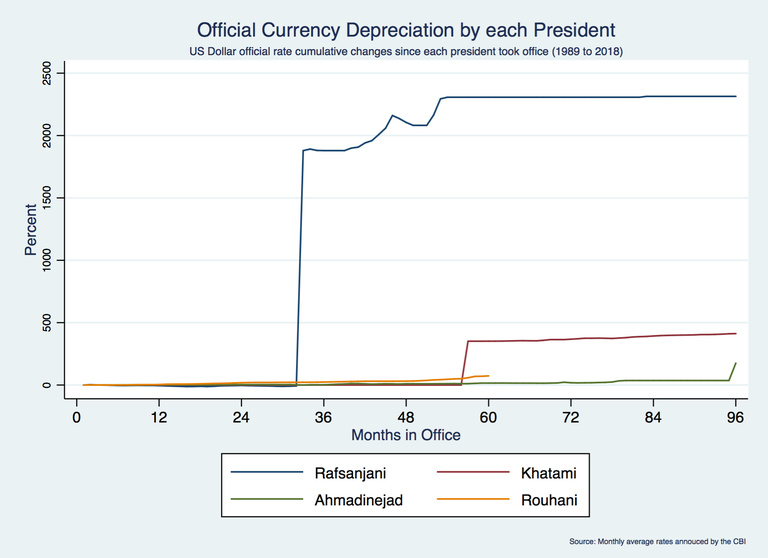 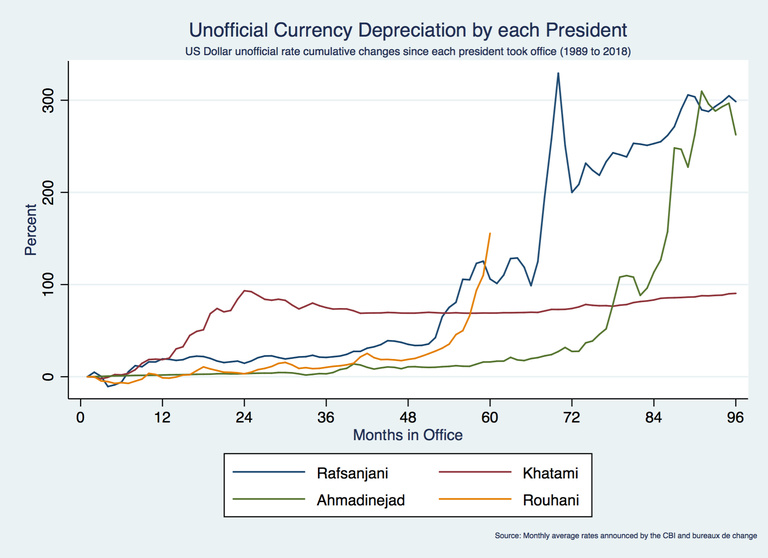 Analogously, inflation in Iran is not “going through the roof” as President Trump recently told Fox news. On the contrary, it is experiencing historically low levels. The annual inflation rate has been in the single digits for two consecutive years which is unprecedented since the 1979 revolution according to the Central Bank of Iran (CBI). The most recent available inflation rate is 10.2 percent (July 2018) and it will increase as the a result of recent currency depreciations, according to the estimation published by the Iranian Parliament Research Center. However, with an average inflation rate of 19 percent since the 1979 revolution, dealing with inflation in Iran is worrisome but not new.[2] 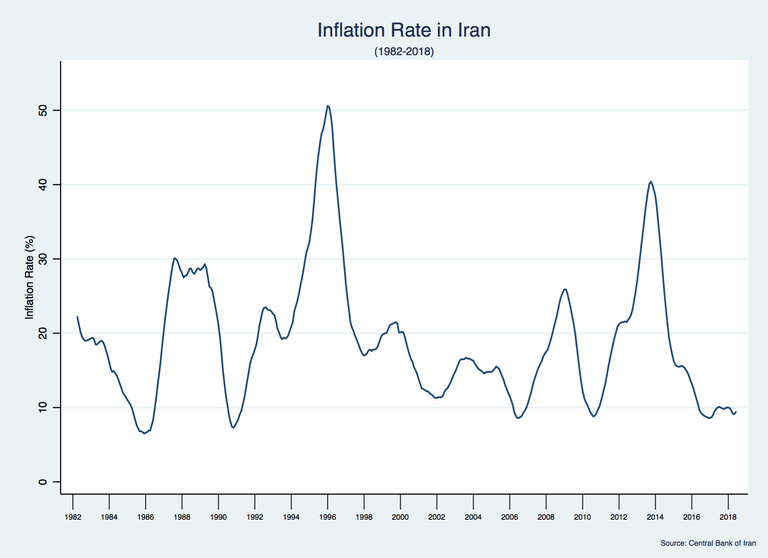 Economic variables such as growth are not very insightful since they have not been updated during the last quarter. However, most recent numbers published by the CBI show a 3.7 percent growth. Unemployment rate fell to 12.1 percent in Spring 2018 from 12.6 percent in Spring 2017 (youth unemployment fell from 28.8 to 28.3 percent in a similar time period) according to the Statistical Center of Iran. Other recently updated variables do not indicate a collapsing economy either. The index of the Tehran Stock Exchange increased around 30 percent during the last three months (as of August 2nd, 2018). Of course, it should be noted that “the stock market is not the economy” and stock market capitalization to GDP for Iran is only 35 percent, but still the stock market is not depicting an economy in free fall. The share of bounced checks both in numbers and volume (i.e. the rial amount of the checks overall) decreased in May 2018 compared to the same month last year (from 15.69 percent to 14.39 percent and from 21.94 percent to 17.52 percent respectively) according to the CBI, while check numbers and volume have both increased at the same time which is significant since checks are broadly used by Iranian businesses for day-to-day financial transactions.

Iran’s economy is going to be hit hard for sure, but the question is how much? The Iranian oil sector, which accounts for 13.5 percent of the GDP, will be the first and foremost victim. Last Iranian year (March 2017 to March 2018), Iran managed to export 2.324 million barrels per day (bpd) on average which was the highest amount since 2008 according to the CBI. During pre-JCPOA sanctions against the Iranian oil sector in which Europeans participated much more eagerly, Iranian oil exports even plunged to somewhere between 500,000 and 600,000 bpd. Though afterwards Iranians managed to find ways to push exports back above 1 million bpd, according to then international affairs director of the National Iranian Oil Company, Seyyed Mohammad-Ali Khatibi. Numbers published by the CBI confirms that Iran’s annual oil exports average never dipped below 1 million bpd in the last 36 years. Thus, cutting Iran oil exports to zero can be a truly arduous task. 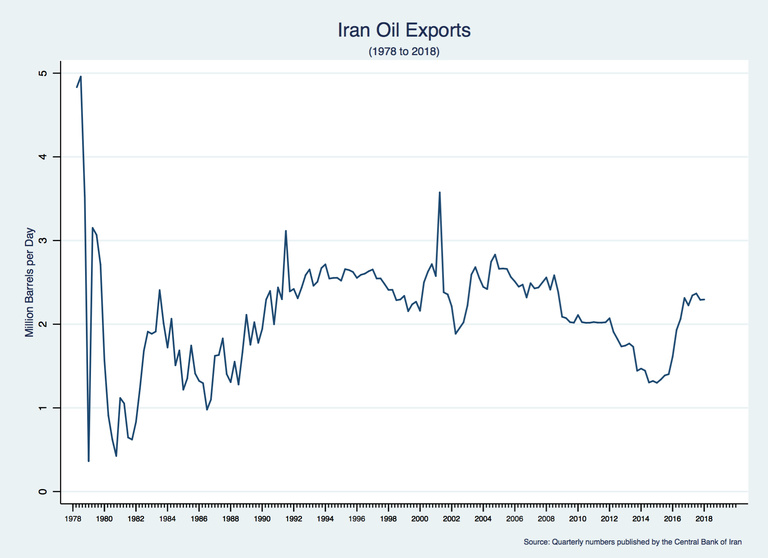 The new U.S. sanctions will seriously challenge Rouhani’s administration and other parts of the government, for which it seems the Rouhani administration has not been well prepared. Selling oil will be hard for Iran and receiving payments for its oil will be even more tedious. Many international companies, from the energy to automobile sector, which had already invested in Iran are leaving, let alone new foreign investments which will be highly discouraged. Sanctions are going to weaken Iran’s economy and cause considerable pain in the long run. Even now, the Iranian economy is facing many difficulties. The Supreme Leader, Ayatollah Khamenei, met with President Rouhani and his cabinet to urge them to steadfastness, and after recent erratic currency and trade policies on behalf of the Rouhani government which created more uncertainty, changes are expected in the Rouhani cabinet, as signaled by the appointment of a new central bank governor by the President. However, assuming that Iran’s economy will collapse in the short term (few months or even a couple of years) would be shortsighted and misleading. Iran’s economy will suffer for sure, but it can survive.

Former U.S. President Jimmy Carter experienced the difficulties of waiting for the Iranians to respond to punitive measures. New economic sanctions alone may make Iranians call the office of US President one day, but not as early as President Trump is expecting. Hence, when they call eventually, it is not known that who will be responding.

[1] Exchange rate numbers are from the Central Bank of Iran and bureaux de change rates.

[2] For a deeper discussion on inflation in Iran see here.