An anti-nuclear weapons protest march in Oxford, England in 1980.

How the UK Government Learned to Talk about the Bomb, 1970-83 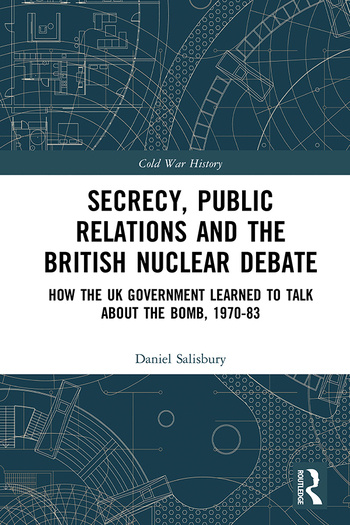 The opening of the British archives has seen historians uncover the secrets of the UK's nuclear weapons programme since the 1990s. While a growing number have sought to expose these former secrets, there has been less effort to consider government secrecy itself. What was kept a secret, when and why? And how and why, notably from the 1980s, did the British government decide to officially disclose greater information about the British nuclear weapons programme to Members of Parliament, journalists, defence academics and the tax-paying general public.

Dr. Daniel Salisbury's new book, Secrecy, Public Relations and the British Nuclear Debate, explores the issues of secrecy, the British government’s efforts to make the case for nuclear weapons and public debates about nuclear weapons in the UK during the 1970s and 1980s. It considers the Labour government's efforts to avoid discussion of nuclear issues in the 1970s at all costs - largely due to their public commitment not to move to a new generation of nuclear weapons whilst continuing to undertake improvement efforts on the deterrent behind closed doors. It also considers the greater openness in the presentation of nuclear policy by the Thatcher government in the early 1980s as government ministers and officials sought to make a public case for their nuclear decisions against the background of a significant public nuclear debate and rising fears of nuclear war.

The book draws together sources from multiple archives and seeks to tell stories besides those of internal government decision making. It traces the work of investigative journalists to crack open the government's nuclear secrecy in the 1970s, focusing on the work of Chapman Pincher who was a constant purveyor of nuclear "scoops" due to his high-level government sources. It also follows the efforts of former government officials and other researchers in London think tanks as they posed challenges to official secrecy by raising the quality of the strategic debate in the public domain. And it looks into the growth of the peace movement as organisations such as the Campaign for Nuclear Disarmament (CND) returned to the political mainstream in 1980, eventually drawing great concern from government ministers and officials that they might lose the public nuclear debate.

The book concludes in 1983 following Thatcher's victory in the general election. Cruise missiles would be deployed at Greenham Common later in the year, and the decision to replace Polaris with Trident was starting to be implemented. The Labour Party - pursuing policies in favour of unilateral nuclear disarmament - had been defeated at the polls. However, in making the arguments, the Thatcher government had placed greater official justifications for the UK's possession of nuclear weapons, as well as basic policy information about the British capability, into the public domain. This was a key period in shaping public knowledge and discussion of nuclear weapons and related issues in Britain, with implications far beyond the period itself.